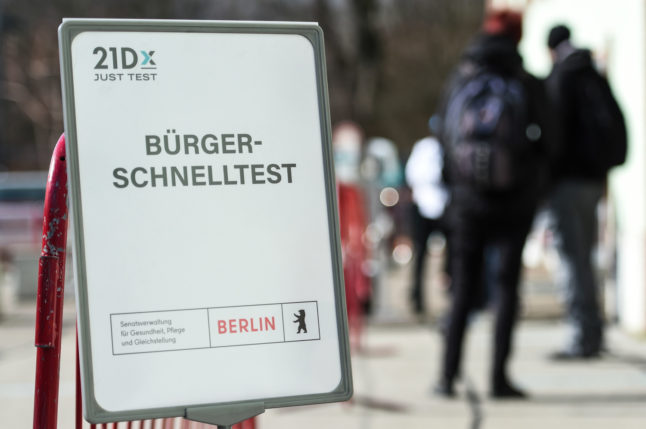 People queue outside a test centre in Berlin on Tuesday. Photo: DPA

What are the rapid tests for?

Free rapid tests as well as self-tests are seen as a key to relaxing Covid-19 measures without driving infection numbers back up.

Negative test results are needed in some states for services where you can’t wear a mask, such as a shave or facial massage. They also could be needed in future for dining in restaurants and other activities.

The rapid tests are not intended for people who have coronavirus symptoms. In this case you should self-isolate and contact your doctor or the health authority and they will decide if you should have a PCR test.

All states across Germany are rolling out the rapid test programme but the process can differ depending on where you live. Check with your local health authority for more details. Here’s an idea of how it works in Berlin.

Where can I get a rapid test?

In Berlin there are around 30 test centres across the city where people can get a rapid antigen Covid-19 test without any charge.

This website shows the full list of centres, which include the Corona Testzentrum Mitte in Augustusstraße and one at Friedrichstraße station. Tests are also offered at five hospitals.

Test-to-go stations are private businesses certified by the Senate Department for Health and conduct tests in the same way as other centres. These stations can include doctors’ offices, pharmacies or other private providers.

Do you need an appointment?

Not for some centres. At the four large centres listed below, you can get a test without a formal appointment. These centres are open Monday to Friday from 9am to 6pm.

In each of the 12 Berlin districts there are also smaller test centres with less capacity. Appointments for rapid tests must be booked there.

Check this website to register for an appointment. The smaller test centres are open from Mondays to Sundays, but the times vary between the locations: they open at 9, 10 or 11am and end at 6pm, but some are open until 6.45pm.

So can I just turn up for an appointment?

For the centres where you don’t have to book an appointment, you should still register in advance via the website to receive a personalised QR code.

If you have not done this in advance, you can also do it at the test centre with the help from staff there if needed.

What do I bring to the appointment?

You should bring your smartphone with the QR code and an identity card, such as your passport.

So are we only allowed one test per week?

Yes, although it’s not clear how authorities are monitoring it. In Berlin the focus was on getting the programme started quickly and not to have too much bureaucracy.

A local authority spokesperson told Tagesspiegel that they would keep an eye on developments and may make adjustments to the process if needed.

What happens if you have a positive rapid test?

The rapid tests are carried out by trained staff who insert cotton swabs deep into the nose or throat. The result should be available within 15 to 30 minutes.

If you get a positive rapid test result, you have to isolate immediately and it is mandatory to have a PCR test to confirm the result.

The PCR test is also free of charge. As a rule, it should be carried out at the test centre. If that isn’t possible, those affected will be told where they can have it done.

What about the at-home test kits?

But they are proving popular – the first batch to go on sale at Aldi last Saturday sold out. Other stores are beginning to stock them.

Keep in mind that both antigen tests are not as accurate as a PCR test. Particularly, if you have just become infected, the antigen test might not come back positive.

READ ALSO: Where and when can I buy a home-test Covid kit in Germany?