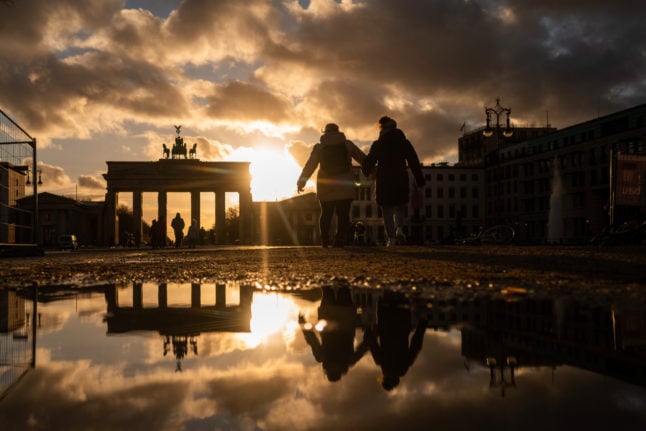 Just a week ago, the head of Chancellor Angela Merkel’s CDU called for “freedom and flexibility” so that states could fight the pandemic their own way.

Now Armin Laschet, who is also leader of Germany’s most populous state, North Rhine-Westphalia, is calling for emergency talks in a bid to introduce a nationwide “Brücken-Lockdown” (bridge lockdown).

It’s the latest in a string of confusing communication from authorities.

We’ve seen an Easter lockdown plan put forward, only to be reversed two days later with a dramatic apology from Merkel.

Merkel, Health Minister Jens Spahn as well as state leaders in regions including Bavaria and Baden-Württemberg have continued to push for stricter coronavirus measures.

The actual numbers are likely even higher as the RKI said that generally, fewer tests are carried out and reported over public holidays, such as Easter.

The above chart by Our World in Data gives an idea of how the trend of daily cases in Germany compared to the UK which has had a tougher lockdown.

On Monday, Laschet proposed a “bridge lockdown” in the fight against the third Covid wave in Germany.

The idea is to bridge the gap until more people in Germany have been vaccinated. The situation requires “that we step up our game in many areas”, said the CDU leader.

Laschet wants to bring forward the meeting planned with Merkel and the state premiers scheduled for April 12th to the coming days. Health experts have already said tougher action against Covid is needed due to variants spreading.

It’s mixed. On Tuesday, the head of the German Association of Towns and Municipalities, Gerd Landsberg, told broadcaster ZDF he wasn’t convinced by a “bridge lockdown”.

“We don’t even know how long it will take for vaccinations to have the success of reducing infections,” he said, urging states to concentrate on sharpening the measures already agreed on.

Berlin mayor Michael Müller (SPD) said there were still too many unanswered questions.

“A bridge lockdown for a transitional period and then with what measures?” Müller told broadcaster ARD. “And that is to apply until many people have been vaccinated. What does all that mean?”

Other states signalled their willingness to hold a meeting, but demanded that a concept be on the table beforehand that everyone was willing to support.

Thuringia’s state premier Bodo Ramelow told Spiegel a meeting could easily be held at short notice. “But there has to be something on the table beforehand that we can really decide on together and, above all, that we can all implement,” the Left party politician stressed.

Hesse leader Volker Bouffier (CDU) said he was prepared to bring forward the crisis talks, but that they would have to take place in person rather than online. “The goal must be an understanding between the states,” he told RND.

Markus Blume, the general secretary of Bavaria’s Christian Social Union (CSU) said Bavaria is only in favour of bringing forward the talks if all federal states are prepared to stay on the same page and tighten coronavirus rules.

Blume told Bild’s online debate that a discussion is useless “if everyone does their own thing again afterwards. That’s why it’s crucial that the states are prepared to take further measures.”

SPD health expert Karl Lauterbach also expressed scepticism: “As long as individual federal states oppose exit restrictions, a new meeting would be of no use,” he told Bild.

People would face more restrictions “to cover up the failure of the vaccination strategy of the CDU-led federal government”, he told the newspapers of the Funke Mediengruppe.

Didn’t states agree to clamp down if coronavirus numbers go up?

Yes. But many of them have chosen to ignore this.

Merkel and the 16 state leaders agreed national measures on March 22nd including an “emergency brake” mechanism for regions to follow when the Covid numbers go above 100 infections per 100,000 residents in seven days. But several states have strayed.

Among those sticking to the strict policy are Bavaria leader Markus Söder (CSU) and Baden-Württemberg boss Winfried Kretschmann (Greens).

In a joint letter last week, they called on their colleagues to implement the agreed emergency brake measures in hotspots, including curfews.

Merkel has also called on states to stay in line, even suggesting she could overrule them at the federal level.

READ ALSO: Merkel vs German states: Who really holds the power to fight the pandemic?

Meanwhile, on Tuesday Saarland will start phasing out the shutdown, despite rising infection figures. Much of public life there will be allowed to reopen, including cinemas, theatres, concert halls, gyms and indoor tennis courts, as well as outdoor dining.

Residents need a negative coronavirus antigen test to use these facilities.

“We have to come up with more than just closing and restricting after a year of pandemic,” Saarland’s state premier Tobias Hans (CDU) has said. Merkel described the announcement as “very daring”. On Monday, a 7-day incidence rate of 91.3 was reported for Saarland.

So will an emergency meeting be held?

It may be that Merkel decides to hold the meeting this week instead of on April 12th. But at this stage we don’t know if a nationwide lockdown will be put on the table. States could be encouraged – or ordered – to follow the restrictions already agreed.

Whatever the case, Merkel will be keen to avoid another embarrassing U-turn like the failed Easter weekend lockdown plan.