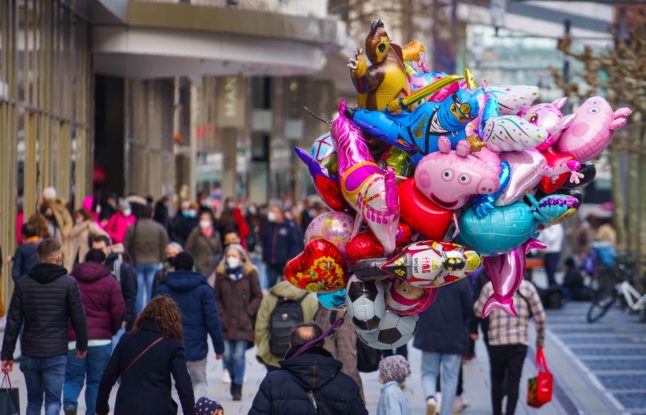 After a dramatic week that saw Chancellor Angela Merkel do a U-turn on an Easter lockdown proposal, pressure is growing on the German government to come up with a firm plan to deal with the worsening Covid-19 situation.

However, there are questions over how and if the government can force states to tighten rules – or if a nationwide lockdown can be enforced.

Social Democrat health expert Karl Lauterbach, who has become a high profile figure in the pandemic, reiterated that he is in favour of stricter measures.

He called for a “final hard lockdown” to combat the rising numbers.

On Monday, 9,872 coronavirus infections within the last 24 hours were logged in Germany by the Robert Koch Institute (RKI) for disease control. Exactly a week ago, the number of cases stood at 7,709.

Meanwhile, 43 deaths were reported within 24 hours, bringing the total number of deaths in Germany to more than 75,900.

Covid cases are always lower on Mondays due to fewer tests at the weekend.

“We can’t let it go on like this,” Lauterbach told Westdeutscher Rundfunk radio. Otherwise, he said, incidence figures would rise above 200 in the coming weeks.

Among other measures, the SPD politician has called for a temporary night-time curfew.

Movement data from mobile phone companies shows that many people in Germany are still meeting privately in the evening, he said.

The health expert slammed the inconsistent approach by Germany’s 16 states, and efforts by some states, including Berlin, to relax rules with more testing.

“The truth is, we first really need to bring control into what is happening,” he said. “We need something to restrain the exponential growth now and that can’t be done with easing.”

“Testing alone will not solve this problem.”

Over the weekend, #harterlockdownJetzt (hard lockdown now) was trending on Twitter in Germany.

A petition was also launched calling on the government to introduce stricter rules as soon as possible. On Monday morning it had attracted 32,849 supporters.

One of the petition organisers, German author and journalist Fridemann Karig said in a tweet: “The lockdown is coming anyway. Every day later prolongs it and costs lives. An earlier lockdown is also a shorter lockdown (and nobody likes lockdowns). That is why @samelou and I have started a petition.”

What are other politicians – and Merkel – saying?

On Saturday Health Minister Jens Spahn said the whole country needed “another ten, 14 days of real shutdown of our contacts and mobility” to bring infections under control.

However, in a TV interview Merkel said that Germany’s 16 states needed to follow the rules already agreed. Merkel has so far not advocated for a nationwide stricter lockdown since the Easter lockdown backtrack.

“We need action in the federal states,” Merkel said in the interview.

Merkel and regional leaders had previously agreed to stick to shutdown measures including an “emergency brake” to be applied in regions with high incidence rates.

The plans call for measures such as curfews in areas with more than 100 new infections per 100,000 people over seven days. But under Germany’s federal system, each state can ultimately decide its own rules.

“I am afraid we will have to live with a certain level of infection in Germany,” he said, adding that “we must also find ways out of the pandemic. And that way cannot always be lockdown.”

Can the German government force states to follow agreed upon rules?

At this stage it doesn’t appear that a nationwide lockdown is on the cards.

However, Merkel said during her TV interview that one possibility would be to “tackle the Infection Protection Act again and say very specifically what has to happen in which case” – for example when the 7-day incidence rate climbs above 100.

Merkel said she would not stand by and watch until there were 100,000 new infections a day in Germany.

This could force states to apply the “emergency brake” and tighten restrictions.

According to a report in Spiegel, quoting law experts, a lockdown can be put in place by the federal government within law if the situation calls for it.

He said: “I could imagine more federal power via the Infection Protection Act, which also forces the states to follow clear rules. I am very much in favour of this and open,” the CSU leader said to broadcaster ARD.

In this context, Söder also slammed states for not putting in tougher measures when cases rise.

Söder appealed to other federal states to introduce a night-time curfew – especially over the Easter holidays.

This would not be legally enforceable nationwide, Söder said. But, “If the Chancellor would take the initiative, an initiative on a national level, to change the law and make clear guidelines, she would have my support,” he said.