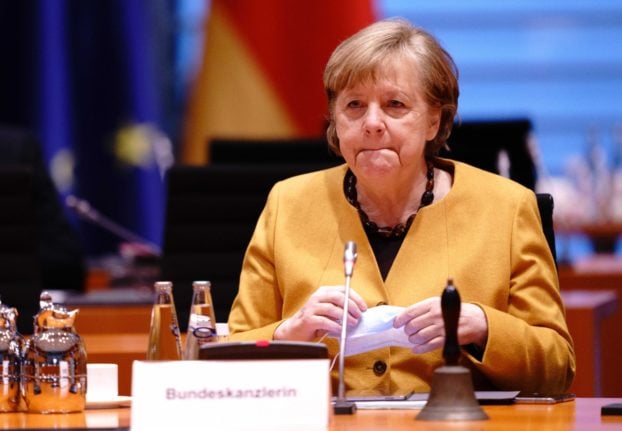 Merkel speaking at the meeting on Wednesday. Photo: DPA

“This mistake is mine alone,” Merkel told reporters in Berlin, adding that she bore “the ultimate responsibility” for the decision, which had led to fierce criticism.

“The whole process has caused additional uncertainty, for which I ask all citizens to forgive me,” she said.

Earlier, the Chancellor had told the 16 state premiers of her decision in a conference scheduled at short notice.

The idea had been “drafted with the best of intentions,” Merkel said in a brief statement afterwards in the Chancellor’s Office.

She said it was imperative to succeed in curbing the third wave of the pandemic, in which Germany has seen a spike in new coronavirus cases over the past couple of weeks.

“Nevertheless, the idea of the so-called Easter ‘Ruhezeit’ (time of rest) was a mistake. It had its good reasons, but was not implementable well enough in the short time available,” Merkel said.

The Easter shutdown, which had been to set to be Germany’s strictest since the start of the pandemic, was to last from Thursday April 1st to Monday April 5th, and largely shut down public life, including supermarkets on all days except Saturday.

Yet it received sharp criticism from the business community and some religious leaders. The reaction from within Merkel’s party was also overwhelmingly negative, with Interior Minister Horst Seehofer saying he was “amazed” that a party with Christian in its name would try and prevent church attendance over Easter.

The meeting on Wednesday was originally scheduled to bring more clarity to controversial aspects of the Easter lockdown such as whether Thursday April 1st would also be a public holiday, what exactly the phrase “ban on gatherings’ meant, and whether church services would be completely banned.

Calls for vote of confidence

After Merkel’s announcement, the opposition Linke (Left) and Free Democrat (FDP) parties have called on the Chancellor to call a vote of confidence in Bundestag, saying she could no longer be sure of the support of her own coalition members of parliament.

“We now have a veritable crisis of confidence in the country’s political leadership,” Linke leader Dietmar Bartsch told the newspapers of the Funke Mediengruppe. “She should ask the German Bundestag for a vote of confidence.”

FDP deputy leader Wolfgang Kubicki told Bild Zeitung: “I call on the Chancellor to call a vote of confidence, because she has not only admitted her own incompetence… but also because she has obviously lost the confidence of part of her coalition factions.”

The toughened shutdown had prompted fierce criticism, with the Bild daily calling the government’s pandemic management a “mess”.

“Merkel and the (regional leaders) have lost sight of the real problem,” it said.

Der Spiegel called the measures a “scandal”, claiming the government had “completely the wrong priorities” and should instead focus on improving its vaccination campaign and test strategy.

Infection numbers continue to rise in Germany, with 15,813 new cases reported in 24 hours on Wednesday by the Robert Koch Institute (RKI) health agency.

As well as ordering the Easter shutdown, Merkel and the regional leaders agreed on Monday night to extend existing virus measures including keeping cultural, leisure and sporting facilities shut through to April 18th.

“The situation is serious. Case numbers are rising exponentially and intensive care beds are filling up again,” Merkel said after announcing the measures.

But patience is running thin in the country over a sluggish vaccine rollout, a delayed start to mass rapid testing and higher infection numbers despite months of shutdowns, with support for Merkel’s Christian Democratic Union party at its lowest level for a year.

Europe’s top economy will elect a new government in September, as Merkel is retiring after 16 years in power.