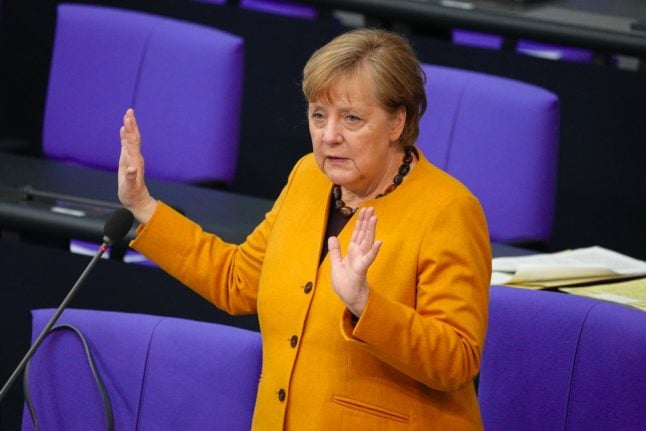 Against a sluggish vaccine rollout, rising coronavirus cases, and a plethora of different opinions and rules across Germany’s 16 federal states, Chancellor Merkel made several unusual moves during an appearance on Anne Will, a popular night talk show, on Sunday.

First, she criticized the leader of her own Christian Democrat party and the man looking to succeed her – Armin Laschet  – for favouring a plan that uses extensive mandatory testing to keep shops and galleries open, even with rising case numbers.

“But he’s not the only one,” Merkel told Will, alluding to the other regional politicians who are going their own way.

In a second unusual move, she floated the idea of overruling state leaders to impose restrictions that would apply across the country to try and break another wave of infections. Laschet and other state leaders have protested, calling for “more freedom and flexibility” for handling the pandemic regionally.

Indeed, states like North-Rhine Westphalia, Saarland, and Berlin have sought to use testing to keep shops and facilities open, right after agreeing to an “emergency brake” with the federal government.

That brake should see strict shutdowns and curfews for areas with more than 100 new infections per 100,000 people over seven days.

So if states have agreed to a nationwide line, why are they then allowed to do their own thing?

Under Germany’s Infection Protection Law, the 16 states have leeway to set their own rules in a host of areas, which only has to be based on national guidance.

READ ALSO: How the German city of Tübingen is betting on Covid tests to reopen public life

So what power do German states have?

German federalism has a history dating all the way back to the Holy Roman Empire.

It took on a new importance after WWII because of how it resulted in powers divided between the 16 states, preventing too much authority from gathering centrally in a country reckoning with its recent Nazi past.

The system is similar to that in the US, for example, where states hold significant political power. Each German state has, for example, its own police force, education system, courts and health system.

Essentially there are 17 governments – in the 16 states and at the federal level.

Meanwhile, article 70 of Germany’s constitution says that lawmaking is in the regions’ power unless stated otherwise in the Basic Law (Grundgesetz).

During the pandemic, however, a federal patchwork of laws has often left German residents confused as to which restrictions apply to whom, where, and when.

It’s also led to moments of public frustration between Merkel and state leaders.

And throughout the second wave, Merkel has favoured putting in strict lockdown policies early to arrest emerging infection waves.

German state leaders, however, have often pushed back during their regular Covid crisis meetings with the Chancellor – which often end with Merkel announcing compromises she doesn’t think go far enough – at very late night press conferences.

Last week Merkel and state premiers announced a stricter lockdown over the Easter weekend – but Merkel dramatically backtracked on it just two days later, apologising for the move. All of this points to a system that doesn’t seem to be working properly.

In the meantime, the country’s incidence rate has doubled in a month and public health experts advising Merkel say only a strict lockdown can break the third wave. “We can’t keep going on like this,” said Merkel during Sunday’s interview.

So what can – or might – Merkel do? The Chancellor has consulted legal counsel and could amend the current law to take over certain pandemic control powers from the states, allowing her to pass the same set of strict restrictions across the country.

For that, she’d have to get approval from her Cabinet and the Bundestag, while consulting with the Bundesrat – which represents the same state leaders she’d be overruling.

Dr Ursula Münch, Director of the Academy for Political Education in Tutzing, said the Bundesrat wouldn’t have an absolute veto on this though.

She also says having Merkel overrule them might give state leaders a bit of political cover, which could work in their favour.

“They would be insulted,” Münch told The Local. “But it comes with perhaps a big advantage of not having to deal with the same amount of local pressure from trade associations to relax restrictions. […] State leaders could just blame the federal government.”

Münch adds that Germany’s Infection Protection Law is from the year 2000, and was designed to respect state powers, not necessarily to deal with nationwide crisis. “We wonder about it today, but no one thought about the possibility of a pandemic at the time,” she said.

Merkel would have at least one high-profile state leader on her side if she did decide to take over pandemic powers.

“If Chancellor Merkel wants to take more initiative at the national level to change the rules and set out clear guidelines, she has my full support,” Bavarian premier Markus Söder, who is a contender as future chancellor in Germany, told broadcaster ARD.

For now, Merkel says she hasn’t yet decided whether she will take that step, but that state leaders will have to take tough action very soon to avoid it. Will they toe the line?