What employees in Germany need to know about Weihnachtsgeld

Many workers in Germany can look forward to a special Christmas bonus from their employer. But who's entitled to it - and how much should it be? Here's everything you need to know about 'Weihnachtsgeld'.

Weihnachtsgeld - or Christmas money - is an annual bonus that gets paid out to employees each winter. In Germany, it's one of the most popular ways to reward and compensate employees, and around 55 percent of German workers receive it on top of their salary each year.

It was originally designed to help employees cover the additional costs of buying Christmas gifts, but these days bosses use it as a way to motivate employees throughout the year, or simply as an additional perk of the job.

People with long-term contracts are also more likely to be treated to some extra spending money at Christmas: 56 percent of permanent employees get Weihnachtsgeld in Germany, while just 45 of those on short-term contracts do.

As an alternative to Weihnachtsgeld, employers may choose to pay what's known as Urlaubsgeld - or holiday pay. This is sometimes paid out along with the salary when the employee takes annual leave, or at another set time of year.

I didn't get a bonus this year - am I entitled to one?

You may well be - but the legal situation is a little complicated. Essentially, German labour laws don't mandate that employees have a right to receive Weihnachtsgeld, but in some cases you could still be entitled to it.

The most common ways that workers can claim a Christmas bonus are as follows:

According to German law, when an employer pays Weihnachtsgeld for at least three years in a row, the entitlement to an annual bonus is considered an unwritten part of the contract. That means that if your boss usually pays out an annual bonus and suddenly decides not to, you may still have a claim to the additional cash.

Another important thing to note is that employees should be treated equally when it comes to any Christmas bonus payouts. In other words, an employee can't be excluded from recieving Weihnachtsgeld unless there is a legally valid reason for doing so.

If your contract or a collective agreement entitles you to Weihnachtsgeld, it's important to check the terms and conditions carefully. That's because some companies may require you to continue working there for a set period of time after recieving your bonus - so leaving before a set date could cause you to lose your entitlement to the money.

How much should Weihnachtsgeld be?

The amount of Weihnachtsgeld employees can get isn't defined by law, but it's often calculated as a proportion of an employees' salary and may also relate to the amount of time you've spent at the company.

According to Federal Office of Statistics, workers in Germany who have a collective agreement will receive €2,747 for their Christmas bonus this year on average - 2.6 percent higher than the average payout last year. 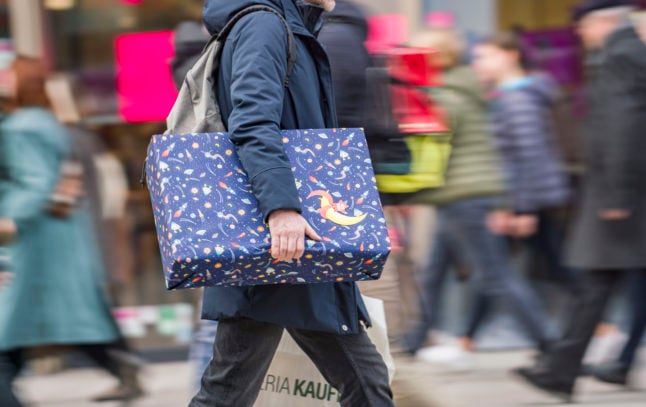 A man carries a wrapped present through the centre of Frankfurt. Photo: picture alliance/dpa | Frank Rumpenhorst

However, there are significant differences between different industry sectors. At a time when fossil fuel prices are soaring, workers in the crude oil and natural gas sector have enjoyed the highest bonuses of around €5,504 on average, followed those in the petroleum and coking sector who netted an average bonus of €5,450. On the other end of the scale, employees who work in recruitment got an average of just €327 on top of their usual salaries.

Collective agreements negotiated by trade unions will often lay out what percentage of an employee's salary should be paid as a bonus at different stages of their employment. In most cases, employees who've been at a company for six months will get 25 percent on top of their normal monthly salary, which is increased to 35 percent after a year, to 45 percent after two years and to 55 percent after three.

When can people expect their bonus?

Different companies may choose to do things in different ways, but traditionally Weihnachtsgeld is paid out at the end of November along with your salary.

This is to ensure that people can use the extra cash to start buying Christmas presents and enjoying the festive season in December.

It's important to remember that Weihnachtsgeld counts as taxable income, so you should see all the usual reductions for income tax and social contributions on your payslip along with details of the bonus.