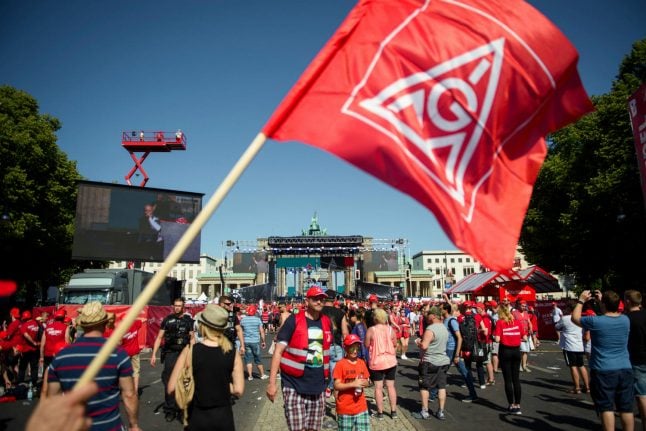 Members of the IG Metall Union at a rally in Berlin in June. Photo: DPA

Settling into a new job can be tricky – and it’s even harder if you’re in a new country where you are less familiar with your rights as an employee (or a freelancer).

That’s why joining a union can be helpful. But it’s not for everyone. Here we give you an overview of trade unions in Germany and what they could provide. We also look at works councils in Germany.

What are trade unions?

Trade unions are groups that aim to advance workers’ rights, and lobby for fair working conditions and improved pay.

In Germany they have a history stretching back to the German Revolution in 1848. Unions still have an important role in German society today. They also have strong influence at the political level, although as membership is declining, they do not wield as much power nowadays.

The biggest organization is the German Confederation of Trade Unions (Deutscher Gewerkschaftsbund, DGB), which is the umbrella association of eight single trade unions, including the powerful IG Metall and Verdi.

Unions offer a variety of services to their members, such as reviewing employment contracts and other legal support. They are generally focused around a specific profession or trade, such as the GEW (German Education Union), which supports teachers in schools, universities and kindergartens.

One of the biggest modern day milestones achieved in the recent past thanks to pressure from unions is the introduction of the minimum wage in Germany, which stands at €9.35 per hour.

Unions also negotiate contracts with state authorities over employment terms for their members, which can often constitute most of a sector’s workforce – so industrial disputes can become wide-ranging and serious. What else can they offer?

Trade union membership can offer lots of benefits, especially when it comes to legal matters.

Members receive free legal advice and representation by a lawyer on issues relating to labour law (for example, regarding pay, holiday leave, parental leave or dismissal).

They can also advise on health insurance and long-term care insurance funds, unemployment insurance, pension insurance (illness, accidents at work, accidents on the way to or from work).

Unions can also get involved in topics related to social law and administrative law, and review employment contracts.

Note that you need to have been a member of a union for three months before you are entitled to free legal advice and legal representation.

They also negotiate contracts with state authorities over employment terms for their members.

In Germany these are called collective agreements (Tarifverträge). This is a deal reached between a trade union and an employers’ association or an individual employer.

This agreement regulates the working conditions for the employment contracts to which it applies.

The working conditions regulated in these deals include, in particular, pay levels, working time, holiday leave and entitlement to bonuses.

Rounds of collective bargaining in recent years have taken place in Germany’s public sector, and led to strikes as unions made demands for better pay and conditions.

How many people are members of unions in Germany?

According to recent figures, around a fifth of employees in Germany are union members, around 7.4 million people.

The vast majority of union members are part of a union within the main union confederation, the DGB.

Research has shown that the number of people belonging to unions has fallen sharply since the early 1990s, partly due to the fall in manufacturing employment in eastern Germany following reunification.

The largest single trade union in Germany is IG Metall, which, which as of 2014 had about 2.3 million members in metal (including automobile and machine building), electronics, steel, textile, wood and synthetics industries.

Statistics for 2018 showed the the DGB’s eight member unions had a total of almost six million trade unionists.

Do I have to pay?

In general, the monthly fee is 1 percent of the average gross monthly income.

There is, however, a discount for students, pensioners and job seekers pay lower fees. Those discounts are calculated differently depending on the trade union in question so remember to check when you are inquiring.

What is a works council?

The works council represents the interests of an organisation’s workforce. It checks whether the employer is complying with laws, as well as keeping an eye on occupational safety and health provisions, collective agreements and organisation-level agreements.

The works council also aims to promote the equal treatment of employees and the integration of foreign employees.

If there is no works council in your organisation, you can set one up.

For more information on various unions in Germany visit the Arbeitsrechte.de website.