Everything you need to know about Germany's Oktoberfest

Munich is gearing up to host Oktoberfest after a two-year pandemic break. We look at some facts about the world-famous celebration, how much beer will cost and why it's expected to attract a record amount of Americans this year.

Germany's world famous Oktoberfest, which attracts millions of visitors from all over the world, was cancelled in 2020 and 2021 due to the Covid-19 pandemic. But it's returning this Saturday, September 17th, and will run until October 3rd.

How long has Oktoberfest been celebrated?

The first Wiesn took place in 1810. At that time, the festivities began on October 17th. However, the festival was moved to September in 1872 due to weather conditions and, since then, Oktoberfest always starts on the Saturday after September 15th.

The event started out as a celebration of Crown Prince Ludwig, later to become King Ludwig I, who married Princess Therese of Saxony-Hildburghausen. The people of Munich were invited to attend the festivities held on the fields in front of the city gates to celebrate the royal event. The fields were named Theresienwiese (“Theresa’s fields”) in honour of the Crown Princess, although locals have since abbreviated the name to the Wiesn.

The following year, the Bavarian Agricultural Association decided to continue holding the festival. It subsequently became an established part of the annual calendar.

How many visitors go to Oktoberfest?

In 1985, over seven million people attended the event, securing a record at the Theresienwiese. The average number of visitors is just over six million. At the last Wiesn in 2019, 6.3 million people came, drank beer and ate hearty food.

People 'Prost' with their beer at Oktoberfest in Munich in 2019. Photo: picture alliance/dpa | Matthias Balk

Where do guests come from?

Although there are plenty of smaller regional folk festivals that take place, Oktoberfest is enjoyed by people from all over Germany - especially Bavaria.

And due to its sheer size and popularity, tourists flock from all over the world to the Bavarian capital.

READ ALSO: Why Oktoberfest is one of Germany's worst beer festivals

According to travel agency Expedia, in 2019 the top cities of origin for foreign Oktoberfest visitors included London, Rome and Amsterdam.

However, Expedia expects a significant shift in markets this year, according to a new analysis.

A particularly large number of guests from the United States are expected at Wiesn 2022 - mainly due to the strong US dollar, which makes travel worthwhile for US residents.

"Even before the pandemic, many US Americans travelled to Munich on the occasion of Oktoberfest," explained Expedia spokeswoman Susanne Dopp.

"This year, however, they are not only coming from cities on the east coast - also many west coasters are seizing the opportunity.

"The strong dollar makes the trip to Europe affordable."

According to a study, many visitors to Oktoberfest this year are expected from Los Angeles, Chicago and Newark.

How important is Oktoberfest to the local economy?

Very. Visitors spend a lot. In 2019, they splashed out more than €1.11 billion, boosting Munich's economy significantly.

There are around 13,000 jobs at Oktoberfest. You need to be strong - waiters and waitresses carry up to 18-litre glasses at a time - the equivalent of more than 40 kilograms.

Across Germany - including in Munich - there is a staff shortage in the catering industry following the pandemic. However, Oktoberfest boss Clemens Baumgärtner said there is "no staff shortage" at the Wiesn itself.

How much beer is consumed?

In 2019, guests guzzled down 7.3 million litres of local German beer, according to breweries.

However, reflecting the general trend in Germany, there is also lots of vegetarian and vegan food - and it's gaining in popularity.

How much will beer cost this year?

Due to rising inflation, many people may be concerned about their budget.

Drink costs are not set by the City of Munich. However, as the organiser of Oktoberfest, the city reviews the prices to ensure that they are reasonable.

Almost 40 tents are set up for the event, with a total of around 120,000 seats. There are also lots of stands, booths and rides.

What are the outfits that people wear?

If you really want to get into the spirit of the Wiesn, you can don a traditional Bavarian costume, known as die Tracht in German. Women usually wear a Dirndl and men wear Lederhosen shorts. Lots of people like to get dressed up for the event but you won't be refused entry if you decide to wear your regular clothes. 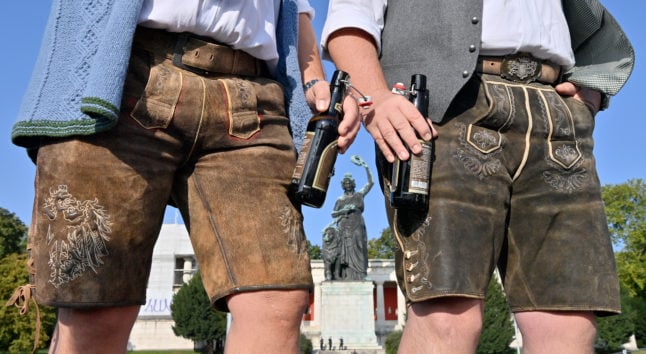 Are there any rules to be aware of?

At the festival site, there are no requirements to wear face masks or show proof of Covid vaccination, recovery or a negative test (known as the 3G rules in Germany). However, you'll have to wear a mask when travelling on public transport.

When it comes to the energy crisis, there are also no restrictions.

Keep in mind that there are some general rules for attending Oktoberfest though, including that backpacks are large bags are generally not allowed.