How flash floods left a trail of destruction in western Germany

The dramatic floods of July 14th and 15th, 2021 killed more than 220 people in Europe, leaving a trail of destruction in Germany and Belgium, and damage in the Netherlands, Austria and Switzerland. We looked back at the devastating natural disaster. 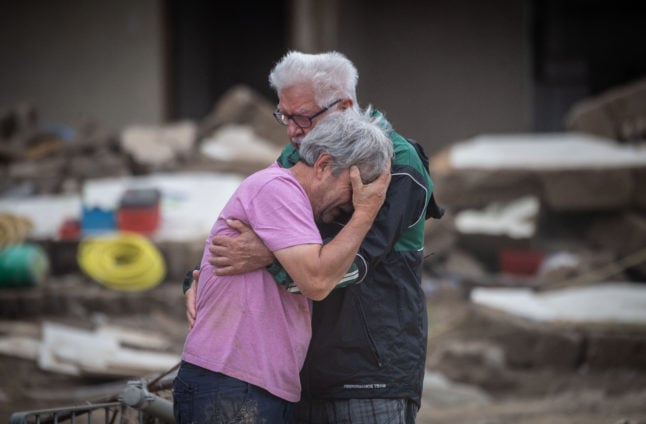 Brothers Bernd and Gerd Gasper hold each other in front of their flood-damaged parent's house in Altenahr-Altenstadt a few days after the flood disaster. Photo: picture alliance/dpa | Boris Roessler

At the same time, the region's steep, narrow valleys channelled the flood waters, while the impermeability of the developed land along the river's edge stopped much of it from draining away.

Residents "got the impression it was about heavy rain" but the "magnitude was not signalled" clearly enough, a German official said after the floods.

A criminal inquiry was opened for "negligent homicide", targeting the Ahrweiler district chief, among others.

The German government now intends to send alerts by phone, a system known as "cell broadcasting".