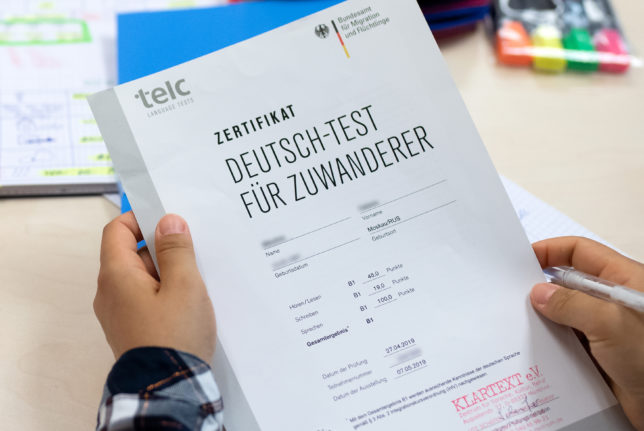 A participant in an integration course holds a certificate that says 'German test for immigrants'. Photo: picture alliance/dpa | Sven Hoppe

Under Germany’s asylum laws, a tolerated stay permit (Duldung) can be given to people who are, in principle, obliged to leave Germany but they are currently unable to. That could be for various reasons such as health, lack of identification papers, or caring duties.

Now, according to plans seen by broadcaster ARD, the Interior Ministry wants to give this group of people the chance to stay in Germany legally.

The government – made up of the Social Democrats (SPD), the Greens and the Free Democrats (FDP), has already backed this plan in their coalition agreement.

Those affected will initially receive a one-year residence permit on probation, according to the proposals.

During this time, they will have to prove that they can speak the German language, and can secure their livelihood.

Up to 105,000 people whose deportation has so far been suspended could benefit from this new planned regulation.

However, people who have committed crimes or who have given false information about their identity are not to be given this opportunity.

In fact, the German government plans to take a tougher stance on the deportation of criminals and people deemed dangerous.

The plans on easing the residence rules and taking a tougher line on criminals are to be discussed with Germany’s 16 states and associations.