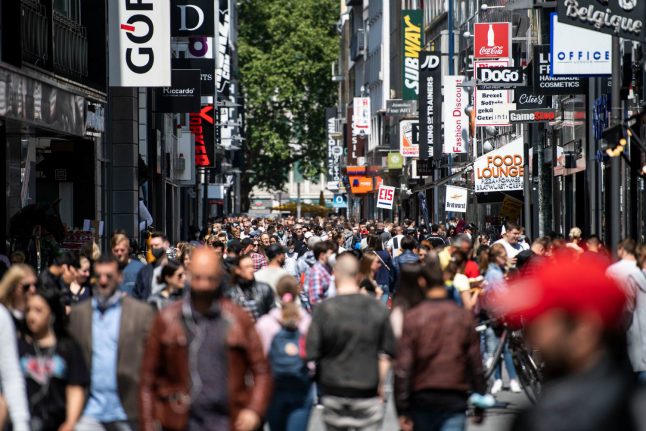 People walking in Cologne in May 2020. Photo: DPA

Occasionally you may be required to prove you are legally a resident in Germany, rather than a visitor. This has become especially important with the many global travel restrictions caused by the Covid-19 pandemic.

While German people carry an ID card (Personalausweis), for foreigners there is no single system or piece of ID that proves you are a resident, and the rules are different depending on where you come from.

Everyone from outside the EU staying in Germany for longer than three months needs a residence permit (Aufenthaltstitel).

Citizens from some countries (including the USA, Canada, Australia, Japan, Israel, New Zealand and Switzerland) are allowed entry into Germany without a visa and can apply for a residence permit while in the country.

Keep in mind, though, that current Covid travel restrictions don’t permit Americans and some other countries who don’t already have a residence permit to come to Germany.

You can contact your local Foreigners Office (Ausländerbehörde) to find out how to get a residence permit.

The rules for what you need to get a residence permit can vary somewhat from place to place and according to your status. You’ll need various official documents, such as a valid passport, proof of health insurance and proof that you can support yourself.

You receive your residence permit as a sticker in your passport and it can be used as proof of residence in Germany.

READ ALSO: Explained – How to secure permanent residency in Germany For people from within the EU or the Schengen zone who have moved to Germany under freedom of movement this is a little more complicated.

If you are a citizen of an EU or Schengen zone country your passport in effect acts as your residency card –  just owning an EU/Schengen zone passport means that you are entitled to live and work in Germany.

However, if you need to prove you are specifically a resident in Germany (and not another EU country) you should turn to your registration document (Anmeldebestätigung or Meldebescheinigung) known as Anmeldung.

You can do that at the Einwohnermeldeamt. All citizens are required to do this within 14 days of arriving in Germany (although this has been extended to six weeks during the pandemic) if staying longer than three months.

The Brexit transition period lasted until December 31st 2020. Before this date British people still had EU freedom of movement rights but this changed after the grace period ended.

However, the Brexit Withdrawal Agreement gives widespread protection to British people who were already resident in Germany before December 31st 2020 to stay.

British people in Germany who fall into this category can receive a residency document.

Provided that a British person was living here in accordance with the EU right of freedom of movement and was registered in Germany, they can register for residence within six months after the end of the transition period and will be issued a residence document with only some routine checks, such as establishing their identity.

As for any other third-country national in Germany, this registration is required in addition to the Anmeldung of their address. Brits in Germany will have up to six months after the end of the transition period to register to apply for the new residence document.

However, while British people are waiting for their residency document, they may need to provide proof of their residence in other ways – so check out the list below.

Keep in mind that there are currently strict travel rules on entering Germany from the UK.

What about other potential forms of proof of living in Germany?

Ultimately your ID card, residence permit and passport is your official source of identification in Germany. But some other documents could in some cases act as proof of being resident in Germany, or supplement your ID.

If you are employed in Germany, keep your employment contracts and make sure you have a full collection of payslips.

You are entitled to receive a payslip giving a full breakdown of your wages and taxes/social charges every month (either electronically or on paper) so if your employer has been sloppy about this you can ask for any wage slips that you have not received.

When you’re applying for a flat in Germany you need to provide payslips for the past three months.

Keep any documents from tax declarations you’ve made in Germany safe as these prove you’re a full time resident and could come in useful. This is especially useful if you’re freelance and don’t have employment contracts or payslips.

Your rental documents or mortgage and property owner’s tax documents show you are a resident in Germany. Keep safe any agreements or important bits of papers or emails.

Gas and electricity bills don’t as such prove that you are a resident but they are useful to have as proof of your address. For example, if you don’t have your registration document (Anmeldung) yet, they can serve as some proof of your address along with your ID card or passport, for example if you’re picking up a package.