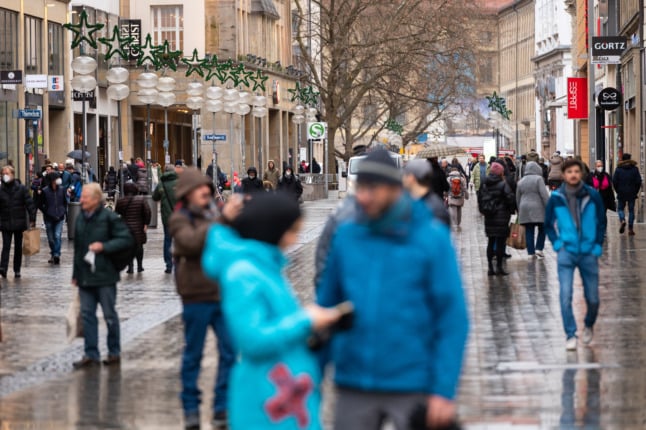 “Several people in a room with an infected person can become infected – and very many also become ill,” he explained.

This level of infectiousness of the new variant is completely different from Delta, he said. Delta has been the dominant variant in Germany since summer.

According to the RKI, Germany reported around 3,200 confirmed cases of Omicron in the run-up to December 23rd, with the vast majority of cases recorded in the past week or so.

As of December 21st, there had been 441 confirmed cases of Omicron recorded in the country and 1,438 additional suspected cases from PCR test results.

Between Tuesday and Wednesday, 810 further cases of Omicron were confirmed by genome sequencing, suggesting that the variant is spreading rapidly. Of the 3,198 confirmed cases, 48 people were hospitalised and one person died after contracting the virus.

However, an analysis of more than 1,200 confirmed cases suggested that people with complete vaccine protection or a booster jab mostly have mild symptoms, the most common being a sore throat and a cough.

According to official government data, Omicron infections occur most frequently in the 15-34 age group, with almost 1,500 cases, and in the 34-59 age group, where 1,050 infections have been reported so far. The state with the highest number of Omicron cases is the populous western state of North-Rhine Westphalia.

For the second time, Germany is celebrating Christmas in the shadow of the Covid-19 pandemic. With pandemic weariness growing among the general population, President Frank-Walter Steinmeier used this year’s Christmas speech to call for unity and cohesion in society.

Stricter rules came into force in Hamburg and Mecklenburg-Western Pomerania on Christmas Eve restricting gatherings to a maximum of ten people – even for those with Covid immunity. The federal and state governments had agreed on Tuesday to introduce this requirement by December 28th at the latest, with most states opting to enforce this rule after Christmas.

However, experts have stressed that with the expected high number of infected people in the course of the rapid spread of Omicron, a large number of people could nevertheless fall more seriously ill and have to be treated in hospital.

On Wednesday, RKI president Lothar Wieler had warned that the health system could be overloaded if the Omicron wave could not be slowed down with strict measures.

He said Omicron was on track to become the dominant variant in Germany in less than three weeks.

Omicron is ‘writing the rules’

In an interview with the Süddeutsche Zeitung on Friday, virologist Christian Drosten – who sits on the Covid expert council – refused to say whether a future lockdown was needed to combat the more infectious Omicron variant.

The government would have to wait and see “whether the measures that are now in force and those that have been extended once again will work,” he said. If the latest contact restrictions do not work as hoped, Drosten believes that entry rules to public venues could be tightened further to only allow fully vaccinated people with booster jabs into places like bars, restaurants and cinemas – a system he termed ‘1G’.

Twice-vaccinated people are protected against severe courses even with Omicron, “but practically not against infection”, said the virologist from Berlin’s Charité hospital.

“However, those who have been boosted recently are likely to contribute less to onward transmission and are noticeably protected against the disease,” he explained. “With Delta, 2G and 3G may be enough, but now Omicron is writing the rules.”