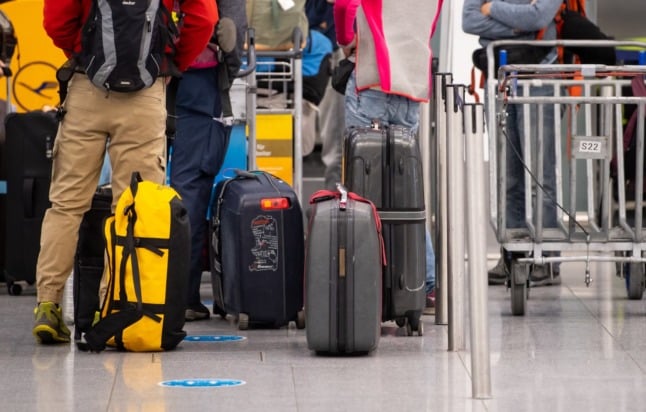 Many Brits in Germany are feeling alarmed watching the rapid spread of the Omicron variant of Covid-19 in the UK.

With Covid cases already at a record high, and Omicron – classified as a Covid variant of concern – becoming more widespread, Britain is facing a huge wave of infections, according to experts.

And countries are reacting.

As our sister site The Local France reported, on Thursday France announced it was putting in place tighter rules for all travellers (regardless of vaccination status) entering from the UK, from midnight on Friday. It means that only French citizens, residents and those with “essential reasons” are allowed to travel into the country The French government also called on everyone to delay travel plans from the UK.

“Our strategy is to delay as much as we can the development of Omicron in our country and take advantage to push ahead with the booster drive,” said French government spokesperson Gabriel Attal.

The French rules also mean that antigen or PCR tests taken within 24 hours before departure will be required for all travellers coming from the UK instead of within 48 hours of boarding.

What does this mean for Germany?

German authorities and politicians have not made any announcements so far, so nothing has changed. But with France tightening restrictions, people are concerned that Germany will follow.

Many Britons or other nationalities who live in Germany have trips booked to Britain for the festive season, while some will already be there.

They are worried that the travel rules will change, which would severely mess up people’s plans and possibly leave them out of pocket.

READ ALSO: The current rules for travel between Germany and the UK

Under Germany’s risk classification system, compiled by the Robert Koch Institute, the UK is already classed as a ‘high risk’ country. That means anyone coming from the UK has to register on the digital online register – Einreiseanmeldung.de – before arrival. Vaccinated or recovered people also have to upload proof of that on this register.

As Britain is not in the EU, unvaccinated people are not allowed to visit Germany unless they are a citizen or resident, or can convince authorities that it is for an essential reason. Unvaccinated people who do qualify for travel from the UK have to quarantine for at least five days on arrival and present a test before the flight.

Germany’s highest risk category is ‘virus variant area of concern’. A region is placed on this list when a concerning variant is spreading widely.

At the time of writing, countries on that list include South Africa, Botswana, Eswatini, Malawi, Mozambique, Namibia and Zimbabwe.

READ ALSO: Is travel to and from Germany possible over the festive season?

German authorities may decide to follow in France’s footsteps for the same reasons, and make tougher rules on people arriving from the UK.

They could decide to upgrade the UK’s risk status to the ‘virus variant area of concern’ category.

This category is severe: travel into Germany is generally banned from places on this list.

Those who can travel to Germany – such as citizens or residents – from virus variant areas must enter a domestic quarantine for 14 days on arrival regardless of vaccination status.

And proof of testing is also required even if you are fully vaccinated or recovered.

What would this mean for travellers?

When a country is placed on this list, there are huge implications.

Flight services are usually scaled down, meaning it is much more difficult to get into Germany in the first place.

As we said above non-essential travel is banned so tourism to Germany is not allowed.

People coming to Germany have to prove they are residents or citizens. In this case, you’d have to show a German passport, resident permit. If you didn’t have then then an address registration certificate (Meldebescheinigung) or a certificate of application for a permit (Fiktionsbescheinigung) should suffice.

It also means that people coming back to Germany would have to have a Covid test even if they are vaccinated or recovered. Unlike in Germany, finding a place to get tested (that is also reasonably priced) in Britain is very difficult. It’s easier for people who live in London or other large cities, but for anyone rural-based or further north, it can be a nightmare.

It also creates huge logistical problems for people with children (although under 12s do not need a test).

Plus a two-week isolation period with no option to end it early is a huge undertaking for people, particularly families or those living in small flats.

Yes, the UK was placed on the ‘virus variant’ list in May 2021 due to the rapid spread of the Delta variant at the time. The risk factor was then downgraded in July when Delta became the dominant variant in Germany.

And last Christmas, Germany controversially imposed a strict ban on travel from the UK, leaving many people stranded, including German nationals and residents.

Yes. The Omicron variant is already here in Germany, and spreading. So this could mean that Germany decides not to put the UK on the ‘virus variant’ list.

South Africa and the surrounding countries were all subject to an immediate travel ban after the discovery of Omicron – but this was before Germany had discovered that the worrying variant was already in the country (not to mention 76 other nations around the world).

Head of the RKI Lothar Wieler on Thursday said Germany has several hundred Omicron cases. Scientists are expecting the variant to hit badly in January.

A lot seems to depend on how prevalent a variant is in a given country. In the UK, experts say there are still a high number of Delta cases – as has been the case since summer. But Omicron cases are rising rapidly and pushing numbers up.

According to the BBC, the latest data suggests about a quarter of cases are Omicron – that would mean around 20,000 of Wednesday’s reported 79,000 cases could be attributed to the new variant. It became the dominant variant in London on Wednesday.

So what will happen?

Firstly: The Local contacted the German Health Ministry and asked them if Germany planned on tightening travel restrictions on UK travel.

A spokesman said the government is “continuously reviewing the extent to which areas are to be classified as risk areas”.

He recommended checking the list of risk areas on the RKI site.

It’s hard to predict how likely it is that restrictions on travel from the UK will be tightened.

That’s because Omicron is already in Germany and spreading. So it may be that authorities do not think it is justifiable to make the UK a virus variant area of concern.

On the other hand, Germany could choose the strategy of ‘buying time’ to get boosters out like France and put the UK on the list, even if it is for a shorter time (i.e. one, two or three weeks).

So it could be that Germany upgrades the risk status of the UK – but then would have to downgrade it when Omicron becomes dominant in Germany (along with any other countries on the list). For anyone still in quarantine after travel, the isolation period would end immediately.

Regardless, if the stricter measures do come into force, it will heavily affect people during the festive season and leave many to question whether they should cancel their trip.

What should I do if I am planning to travel to the UK?

We will keep you posted but you should also check the RKI risk list regularly to see if there are any changes. Usually the RKI updates the list on Fridays but sometimes it can happen on other days.

Anecdotally, we’ve heard that some people in Germany have already decided to cancel their trip to the UK for now because of the Covid situation there. So that could be an option for you if the risk is too high.

However, travel is not banned so you can go ahead with your trip if you want to, but be aware of the situation in both the UK and Germany, and make sure to follow all the rules.