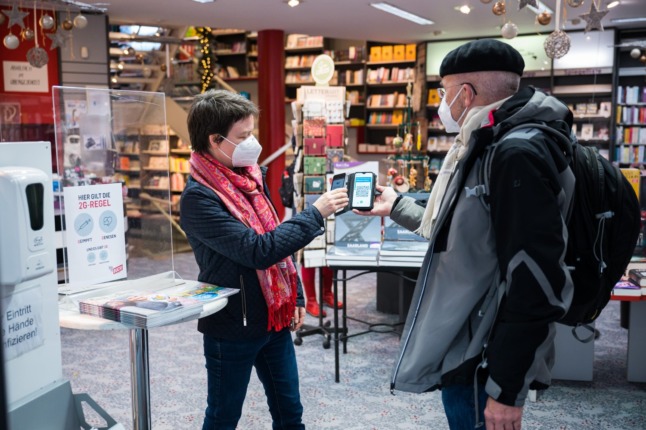 Whether it’s to see a loved one, embark on a skiing trip or enjoy a Christmas market (at least in the areas where they are still open), many people have travelled to Germany recently.

But tourists report varying experiences of using their foreign vaccination certificate as proof to enter public spaces, and of getting their hands on an EU digital pass.

We asked our readers what they thought about Germany’s 2G and 3G rules. 2G means only fully vaccinated people (Geimpfte), and those who’ve recently recovered from Covid (Genesene), can enter, and these regulations were recently widened to include non-essential shops, culture and leisure throughout Germany.

3G rules still apply for riding on public transport – meaning you have to be vaccinated, recovered, or have proof of a negative Covid test (getestet).

What kind of vaccination proof do visitors to Germany have?

Germany still has strict entry rules for travel. Generally only vaccinated people from non-EU countries are allowed to come to Germany. They have to show proof of vaccination before boarding the flight.

Once in Germany, people usually need to show vaccination proof (and possibly ID) whenever they go into a shop, restaurant, Christmas market or museum.

He used the UK’s NHS Covid pass on paper and on his phone mainly for “getting into theatres, concert halls and hotels and a couple of restaurants, but the QR code was only scanned a handful of times (and only once or twice successfully)”, he said.

“Mostly stewards preferred to read the details on the paper/phone and checked ID against passport.”

Charlie, 28, from the UK said he found the rules easy to understand and that “everyone accepts my NHS pass”.

Others also reported having digital vaccinations from their home countries, including India, the USA and Canada (more on that below).

Can foreign visitors get the EU digital vaccination pass?

People in Germany get a QR code which they scan into the CovPass or Coronavirus-Warn app to upload the EU digital vaccination certificate. They can also use the paper certificate with the code if they don’t want to use a smartphone.

Readers of The Local have been getting in touch with us to say they are worried about not being able to get this certificate in Germany.

Unlike some countries – like Italy, France and Switzerland where tourists can apply for the respective country’s version of the EU digital vaccine pass – the German government currently only allows people who are based in Germany to transfer their vaccination pass into a digital version with QR code.

The official line from the German government is that to get the Covid-19 vaccine certificate, you need to live, work or study in Germany.

READ ALSO: Can tourists and visitors to Germany get the EU digital vaccine pass?

It has created some problems for visitors. Some restaurants or leisure facilities, for instance, only accept the EU digital pass.

One of the trickiest things about Germany’s system is the inconsistency. Despite the official standpoint by the government, some visitors from abroad have been able to get the digital vaccine pass at a pharmacy, while others weren’t so lucky.

“I got a pharmacy to import my NHS QR code into the EU system, and I have since scanned them into the Corona-Warn-App and the Luca app.

“Everyone has accepted this, although they always check I have had the course of vaccinations.”

Deb Turner, 66, from the US, said: “I am American and I took my passport, and vaccination card to the Apotheke and they translated it for me at no cost.

“It was all done very efficiently. It really was great!”

READ ALSO: How I got Germany’s new digital CovPass with my US vaccination certificate

Stuart, 48, from South Africa, said: “I went to the International Pharmacy in Stuttgart, gave them my handwritten card and they converted it for me.”

A few respondents told us that some pharmacies refused to convert their foreign vaccination certificate to the EU one – but they eventually found one that did it.

Jake C. Kim, 40, said two places declined to provide an EU digital vaccine pass after he showed his US CDC vaccination card. Kim said he was told “that I needed to be a holder of German health insurance”.

He then found a pharmacy willing to do it for a fee of €20 – however, the EU vaccination pass should be free, according to the German government.

Amelia, 29, originally from Canada, had a similar experience.

“Tried to go to one Apotheke to convert my US CDC card and was refused,” she said. “Found another Apotheke online via Reddit and went there; they were able to do it for me.”

“Once I got an EU digital certificate it was easy to use. For two weeks in Berlin I tried to use my US CDC card, which usually went well, but I was refused entry once to a restaurant and had to argue my way through on a few other occasions. I also avoided going to clubs until I got my EU code because they all said that they only accepted that.”

What about those who were refused the EU vaccination pass?

Barbara Larsen, 66, from the US wasn’t able to get EU digital vaccine proof during a recent visit to Germany.

“I tried to get a digital vaccination certificate at a pharmacy in Germany and was told it was only allowed for German citizens and legal residents,” said Larsen.

Another US citizen Ryan, 30, visited Bavaria and Berlin in November.

Ryan said he was told by a pharmacy that “tourists have no way of obtaining the EU digital vaccination certificate in Germany at the moment”.

A 25-year-old from Canada, who travelled to Baden-Württemberg, said she was frustrated because she couldn’t get the EU vaccine pass.

“We went to the Apotheke and they said they wouldn’t give it to us. This was a very disheartening process.”

Another Local reader Odarci Maia Jr, 57, visited Germany in November and said the EU digital certificate is “impossible to get for people from abroad”.

Vidya Ravi, 28, visited Germany from India in November and tried to get the EU vaccine pass but said “no one was willing to convert”.

Others didn’t try to get the EU pass but recognised the limitations of their foreign vaccination proof.

Kristine Munden, 54 visited areas including Lower Saxony and Berlin with her family from the US in November.

She said: “Everyone accepted our CDC certificate for three vaccination shots except the enclosed shops of Ku’damm Weihnachtsmarkt like Käthe Wohlfahrt (in Berlin).”

Lorie Whitaker, 44, from the US, said: “We had no issues. Every restaurant and hotel accepted our US paper cards. However if we had wanted to go ice skating in Baden Baden, at the outdoor rink, they were only accepting digital QR codes, so I don’t think we would have been able to do that.”

What are some of the other issues?

Our survey was aimed at visitors, but we received some comments from people who recently moved to Germany and they reported issues.

Supriya, 41, from India is based in Nuremberg, Bavaria, and is entitled to the EU vaccine pass. But when she tried to get it a pharmacy they did not have the Covishield vaccine in the database.

“This is an EU-approved vaccine but a foreigner like me who has moved to Germany, cannot get a digital certificate as the local certificate portal does not recognise it,” Supriya said.

READ ALSO: Can I travel to Germany if I’ve had AstraZeneca’s Covishield vaccine?

Goel, 56, in Stuttgart reported other problems when using an Indian digital vaccination certificate.

Meanwhile, Odarci Katelyn, 26, who is based in Berlin for grad school, said: “So far, everyone has accepted my paper certificate. But several people have told me that I should have the QR code because soon they won’t accept the paper one.”

What’s the verdict on Germany’s Covid ‘2G and 3G’ rules?

Most respondents to our survey said Germany’s entry rules to public were clear and made sense, although some people said they didn’t have their vaccination status checked consistently.

However, this has been stepped up in the last two weeks after Germany tightened its rules.

Andrew H., 46, from the US said the German Covid entry system was “a lot better than the US”.

“Rules are across-the-board and very clear.” he said.

Heidi, 41, also from the US, said: “I have been asked for proof of vaccination before being seated at any restaurant or cafe. I appreciate knowing that they are being so diligent.

Another respondent criticised the fact that some businesses are not aware of the rules on allowing exemptions for groups, such as pregnant women, because Germany did not give an official recommendation on the vaccine for this group until months after the general population.

A few other people said that didn’t think there was any need for Germany’s Covid pass entry system.