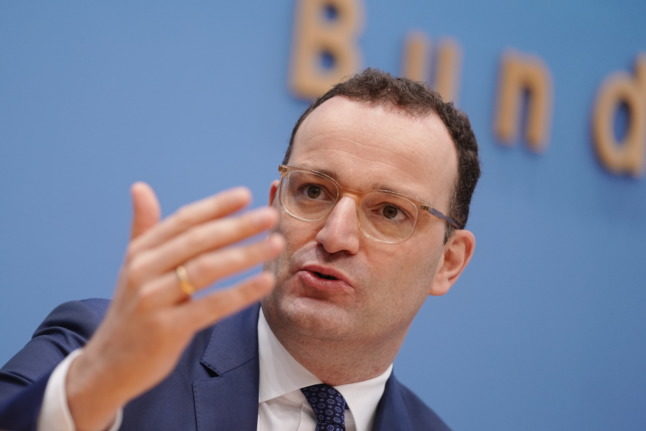 “Probably by the end of this winter, as is sometimes cynically said, pretty much everyone in Germany will be vaccinated, cured or dead,” Spahn said, blaming “the very contagious Delta variant”.

“That is why we so urgently recommend vaccination,” he added.

The stark warning comes as Germany is racing to contain a record rise in coronavirus infections in recent weeks, with hospitals sounding the alarm about overflowing intensive care units.

Despite widespread access to free coronavirus vaccines, just 68 percent of the German population is fully vaccinated, a level experts say is too low to keep the pandemic under control.

Germany, the EU’s most populous country, added another 30,643 cases on Monday, according to the Robert Koch Institute health agency, bringing the total since the start of the pandemic to just over 5.3 million.

“We have a very, very difficult situation in many hospitals,” Spahn said.

In regions with high hospitalisation rates, the unvaccinated will be barred from public spaces like cinemas, gyms and indoor dining.

Employees are asked to return to working from home whenever possible, while anyone going into the workplace has to prove they are vaccinated, recovered or have recently tested negative – a system known as “3G”.

The same rule applies on public transport in those areas.

Several of Germany’s hardest hit regions, including Bavaria and Saxony, have gone even further by cancelling large events such as Christmas markets and effectively barring the unvaccinated from non-essential public life.

All vaccinated adults have also been urged to get a booster shot to combat waning vaccine efficacy after six months.

However, debates are currently raging over Spahn’s decision to limit the amount of the Pfizer/BioNTech vaccine that doctors are able to order to 30 doses per week.

Unlimited doses of the “equally effective” Moderna vaccine will be available to plug the deficit, the Health Minister has claimed.

The worsening coronavirus has ignited a debate about whether Germany should follow Austria’s example and introduce mandatory vaccinations.

Spahn, who is in a caretaker position until Germany’s incoming new government is officially installed, told reporters he remained “sceptical” about mandatory jabs.

But health expert Karl Lauterbach from the centre-left Social Democrats, which narrowly won September’s general election, said he “can no longer rule it out” and it may even be unavoidable to defeat the Delta variant. Bavarian premier Markus Soeder has echoed the sentiment, as have several other leading politicians.

Outgoing chancellor Angela Merkel’s spokesman, Steffen Seibert, said it was “sensible” to at least have a discussion about mandatory jabs.

He stressed however, that it would be for the new government to make the decision.

The leaders of Germany’s 16 regional states have already said they want legislation to be introduced requiring health workers and those who care for the elderly and vulnerable to get Covid jabs.