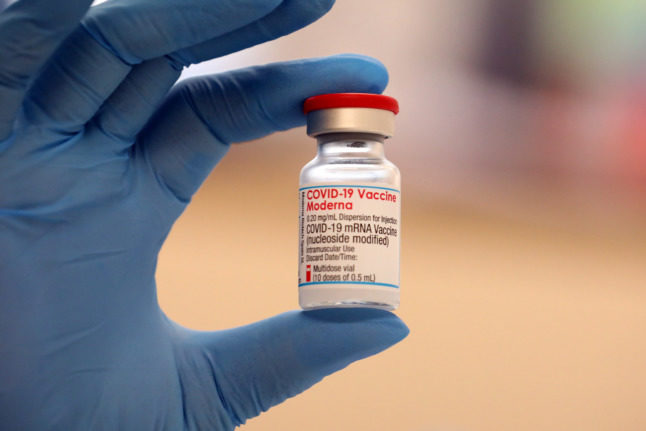 A medical worker holds up a dose of the Moderna vaccine. Photo: picture alliance/dpa/dpa-Zentralbild | Bodo Schackow

On Thursday, the heads of the 16 federal states agreed that mandatory vaccinations for health workers should be carried out “on a facility-by-facility basis” and urged the federal government to implement this as soon as possible. But discussions for mandatory vaccines for the general population are also intensifying.

Holding a press conference about the availability of mRNA vaccines on Monday morning, Health Minister Jens Spahn (CDU) repeatedly refused to rule out the possibility of introducing mandatory vaccination in Germany in the future.

“That is not a decision we can make today,” he told reporters.

On Sunday evening, SPD health expert Karl Lauterbach had also raised the possibility of compulsory vaccinations in a talk show on the TV station Bild.

“We must move towards vaccination obligation,” he argued. “Without compulsory vaccinations, we obviously won’t achieve the vaccination rate we need to get to.”

On Monday morning the Robert Koch Institute (RKI) announced a  seven-day incidence of 386.5, reaching a new high for the 15th day in a row. 30,643 new infections within 24 hours were also reported, although fewer case numbers are usually reported over the weekend.

Bavaria’s Health Minister Klaus Holetschek also recently said that he would not rule out a general vaccination requirement.

“I was always actually an opponent of compulsory vaccination,” he told Deutschlandfunk radio. However, he now believes “that we need to talk about this issue relatively quickly.” “Personally, I am now actually in favour of this general vaccination obligation as a last resort,” he said. Bavaria is currently one of the worst-hit federal states in Germany: on Monday the Robert Koch Institut reported an incidence of 640 in the region.

The president of the Robert Koch Institute (RKI), Lothar Wieler, expressed restraint in the debate about compulsory vaccination, but said that it could be seen as “as a last resort” on ZDF television on Sunday. But he repeated his calls for people to get vaccinated voluntarily. “We must ensure that we get as many people as possible to vaccinate, and boost those who have complete basic immunisation,” he said.

As of November 21st,  68 percent (56.5 milllion people) of the overall population were fully vaccinated, and at least 70.5 percent had received at least one dose. But in some states the vaccination rate is considerably lower – in Sachsen, the rate of vaccinated people is only at 59.8 percent.

There are already strong objections from some politicians to the idea of a mandatory vaccination, however. The deputy leader of the FDP parliamentary group, Michael Theurer, told the Bild programme: “We think it’s unconstitutional.”

The deputy chairman of the CDU/CSU parliamentary group in the Bundestag, Thorsten Frei, also expressed great skepticism.  He told Die Welt: “A general vaccination requirement is likely to be disproportionate and thus unconstitutional under the current framework conditions because of the serious interference in the right to physical integrity.”