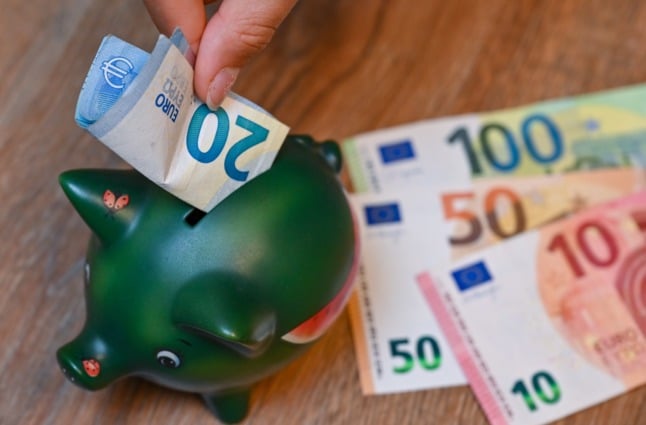 A person putting money into a piggybank. How will a possible new government deal with new ambitious projects? Photo: picture alliance/dpa/dpa-Zentralbild | Patrick Pleul

On Friday, the leadership and chancellor candidates of the Social Democrats (SPD), the Greens and the pro-business Free Democrats (FDP) unveiled their initial deal that they hope will form the foundation of coalition talks. They want to form a three-party constellation for the German government.

Formal negotiations for the “traffic-light” coalition – named after the parties’ red, green and yellow colours – are set to start in the coming weeks. The SPD’s chancellor candidate Olaf Scholz is aiming to form a government by Christmas – just over two months away.

Do they agree on anything?

Yes, apparently so. The business friendly FDP is not a natural partner for the SPD or Greens, which stand to the left, but we saw the first glimpse of what a new government between the three parties could look like. They thrashed out an initial agreement, which included plans for a €12 minimum wage, changes to immigration and citizenship laws, and a huge climate-friendly overhaul.

Yet there are bound to be sticking points, and the parties will be desperate to pull the policies in their direction. Here’s what could upset the united front.

For the coming year Germany’s famous debt brake rule, which forbids the government from borrowing more than 0.35 percent of gross domestic product (GDP) in a year, was put on hold because of the cost of the Covid pandemic. The grand coalition’s budget draft so far provides for new debt of €100 billion.

This extra-large buffer can certainly be used to pre-finance some of the planned major investments for the future. But can it really finance the plans to expand renewable energies at record speed, to convert electricity grids and infrastructure in order to move the entire industry to be climate-neutral by 2045?

The Greens’ also want an accelerated exit from coal energy, which is to be brought forward by eight years to 2030.

On Friday the SPD, the Greens and the liberal FDP pledged massive investments to make Europe’s top economy greener and more digital, but “within the framework of the constitutional debt brake”. However, when it comes to deciding how to draw up the 2023 budget – the year when the debt brake will be resumed – there could be a lot of rows.

Hurdle 2: The search for cash

That leads us to the search for where to find money to do everything.

SPD co-leader Norbert Walter-Borjans told Bild am Sonntag that the new government “will fight tax fraud and money laundering even harder and close tax loopholes”, explaining how the financing dilemma could be solved.

But in the fight against tax fraud – every year the treasury misses out on about €50 billion – thousands of vacancies in the tax offices would have to be filled and the money laundering unit at customs would need to be strengthened to help deal with this.

The last coalition agreement between the CDU/CSU and the SPD already stated: “We want to fight tax evasion, tax avoidance, unfair tax competition and money laundering efficiently and unbureaucratically within the national, European and international frameworks”.

Attempts will probably be made to solve cash problems via subsidiary budgets, for example with a multi-billion investment and funding offensive by the state-owned KfW Bank. To finance the restructuring of the economy and industry, climate-damaging subsidies are also to be cut – and that could hit German carmakers in particular, while the American e-car company Tesla would be the winner, writes Berlin newspaper the Tagesspiegel.

The situation is aggravated by the goal of climate neutrality (by 2045 Germany aims to become greenhouse gas neutral), the completion of the nuclear phase-out by the end of 2022 and the coal phase-out desired by the Greens, ideally by 2030. In the affected German regions, such as in North Rhine-Westphalia, this has led to uncertainty over people’s lives and livelihoods. And where will the electricity come from, especially since the demand has increased drastically? So far, there is no real plan.

The entire industry will have to convert its processes. Steel, chemical and cement plants will need to produce primarily with the help of hydrogen under these plans. Cars will have to run primarily on electricity in future. To achieve this, wind and solar power has to be expanded at an unprecedented pace and new electricity grids, as well as hydrogen pipelines, will have to be built. Gas will remain a bridging technology, which in turn may exacerbate dependence on Russia.

At the same time, German residents with high electricity bills or fuel prices can’t be driven into poverty – but what form state compensation should take here is still completely open.

So far, politicians have no well thought-out plan for “the biggest modernisation project of the last 100 years”, as SPD candidate for chancellor Scholz called it.

A lot more talk on the ins and outs of this project will be needed – and there will no doubt be serious clashes.

The cost of living is going up considerably in Germany for ordinary people.

The price of a litre of premium petrol is approaching two euros in many places. The cost of fruit, vegetables, pasta and meat show inflation on every till receipt. The situation will worsen because of the enormously high gas prices in winter with rising heating costs. That means the coalition negotiations will have to deal with immediate measures – even if economists expect less inflation for the coming year.

READ ALSO: Why is everything in Germany suddenly getting so expensive?

It’s also about the basic question: how can further divisions in society be avoided? The youth wing of the SPD (Jusos) and the rest of the left side of the party are already rumbling about the initial deal which would not see tax rises on the rich in order to relieve the lower and middle classes.

The SPD and the Greens wanted to raise the top tax rate for top earners (those earning €100,000 and above) from 42 to 45 per cent and reintroduce the wealth tax. It was a key promise, especially since many fortunes have grown in the pandemic while millions of people have been on reduced hours or lost their jobs.

Yet on Friday the parties agreed to not raise taxes during their mandate – a win for the pro-business FDP which has refused to raise any fiscal pressure on taxpayers.

Possibly, however, the inheritance tax, which is not mentioned in the exploratory paper when excluding tax increases, could be a lever to collect more cash here; for example, by closing loopholes.

According to the ZDF political barometer, 75 percent of people in Germany are in favour of a heavier tax burden on very high incomes.

Hurdle 5: The future of pensions

Germany is in a tricky position. As Germans live longer while also having less children – and the babyboomers retire – the demographic makeup of society is changing dramatically. While the proportion of working age people to retirees is currently three to one, it is expected to increase to three to two by the year 2060.

That means that there are ever fewer working-age people paying into the state pension system to support a pay-outs for an ever larger population of pensioners.

One way the parties want to tackle this is having more skilled workers from abroad – and all parties agree on making it easier for people with skills to move to Germany.

But the coalition parties in their initial agreement have also proposed an ‘equity pension’ based on the model in Sweden – and this is a win for the FDP.

FDP deputy leader Johannes Vogel is one of the masterminds behind it. “In order to make the German pension system fit for the future, we need a big push,” he stressed in an article for the Deutsches Aktieninstitut.

“Therefore, we suggest following the Swedish example.” Sweden introduced a new element in the pension system at the end of the nineties with the “AP7 Fund”. This fund invests capital in shares, mostly through global index funds.

The aim in Germany is for insured employees to pay around 2 percent of their gross wages into a new equity pension pot, and about 16.6 percent into a pay-as-you-go system, divided into employee and employer contributions.

“We will also allow the German Pension Insurance Fund to invest its reserves on the capital market in a regulated way,” the exploratory paper says.

But even if risks are far lower with index funds, if there are major slumps on the financial markets, this can lead to pension losses. This could then quickly lead to upset, which is why the design may be even more complicated than it first appears.