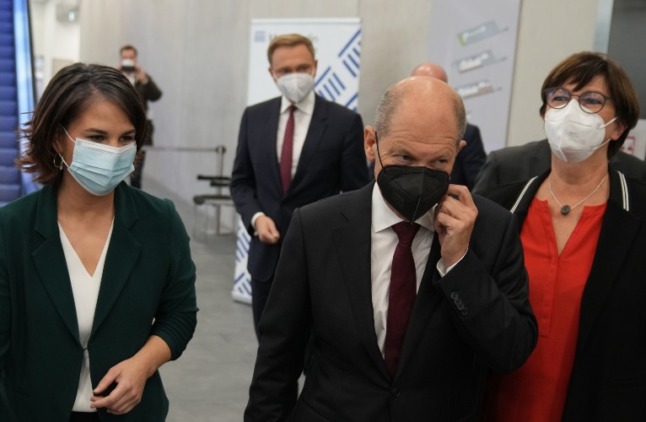 German Finance Minister Olaf Scholz took a step closer to succeeding Angela Merkel as chancellor on Friday, as his Social Democrats, the ecologist Greens and liberal FDP announced a preliminary deal to form a new government.

The three parties have been holding talks since Scholz’s centre-left Social Democratic Party (SPD) won the general elections on September 26th with Merkel’s conservatives in second place as she prepares to leave politics.

“Overall, we can sense here that a new beginning is possible, brought about by the three parties that have come together here,” Scholz told reporters.

The three parties aiming to form Germany’s next coalition government promised Friday to maintain the no-new-debt rule and not introduce any tax hikes, continuing the country’s familiar path of fiscal rigour, according to an initial coalition agreement.

The centre-left Social Democrats, the Greens and the liberal FDP pledged massive investments to make Europe’s top economy greener and more digital, but “within the framework of the constitutional debt brake”. The text also vowed not to introduce new taxes or increase existing ones.

In their initial agreement, they agreed to maintain the so-called debt brake limiting new borrowings to 0.35 percent of output per year.

The Social Democrats secured their electoral promise of raising minimum wage to 12 euros ($14) “from the first year” from the current 9.60
euros.

All three agreed to lower the voting age to 16 – something likely to favour the Greens and FDP which have younger supporters as opposed to Angela Merkel’s conservatives, who are largely backed by Germany’s army of pensioners.

​​The SPD, Greens and FDP want to reduce electricity costs for private households and businesses.

“In the course of the legislative period, we will end the financing of the EEG levy via the electricity price as quickly as possible,” reads a joint paper presented by the three parties on Friday. “In this way, we will reduce electricity costs for private households and businesses.”

Billions of euros in levies under the Renewable Energy Sources Act (EEG) are currently used to subsidise green power.

The subsidies for wind and solar partly explain why Germans pay the highest electricity bills in Europe.

Germany will aim to bring forward its exit from coal energy to 2030 from the initially planned 2038, according to an initial agreement.

“To meet targets on climate protection, an accelerated exit from coal power is necessary. Ideally, that should be achieved by 2030,” said the text agreed on between the Social Democrats, Greens and the liberal FDP.

The SPD, Greens and FDP do not want a general speed limit on Germany’s famous autobahns.

“We want to make Germany the leading market for electro-mobility and, to this end, massively accelerate the expansion of our charging station infrastructure. There will be no general speed limit,” the joint paper said.

Green Party leader Robert Habeck said conceded that “we were not able to push through the speed limit.” The Greens had pledged at 130 km/h limit in their manifesto.

No new combustion engines after 2035

The paper states that the EU’s “Fit for 55” climate program should be supported.

“According to the EU Commission’s proposals, in the transport sector this would mean that only CO2-neutral vehicles would be registered in Europe in 2035 – with a correspondingly earlier impact in Germany.”

No increase in pension age

“There will be no pension cuts and no increase in the statutory retirement age,” the paper says. The paper foresees “partial capital coverage” for future pensions – ie an investment fund to run parallel to the current Generationsvertrag.

“To this end, in a first step we will inject a capital stock of ten billion euros into the German pension insurance scheme from budgetary funds in 2022,” the paper says.

Foreign policy was dealt with in broad strokes in the initial document.

The parties however emphatically said they “want to raise Europe’s strategic sovereignty” — likely to please the continent’s second biggest power France, which has made this a priority of its EU presidency beginning 2022.

The transatlantic relationship will remain a “central pillar” for Germany, and NATO is an “indispensable element” for the country’s security, the text said.

And potentially grating to Poland or Hungary – the parties want “an EU which protects its values and rule of law internally and externally”.