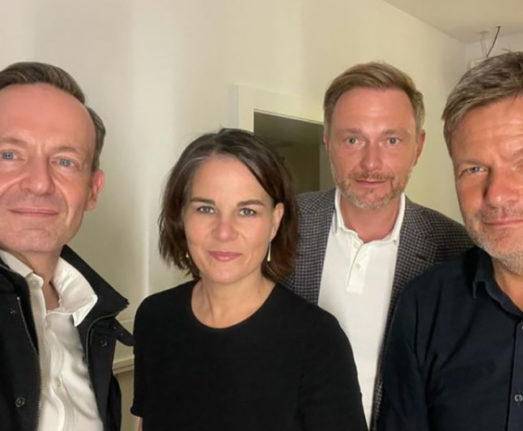 Just as they promised, the Greens and FDP have wasted no time at all in getting to know each other better after Sunday’s election.

The results of the parliamentary elections were confirmed in the early hours on Monday, and by Tuesday evening, Green Party leaders Annalena Baerbock and Robert Habeck had met with FDP leader Christian Lindner and Secretary General Volker Wissing for exploratory talks.

Posting a picture of the group on Instagram after the chat, they wrote: “In the search for a new government, we are sounding out common ground and bridges over dividing lines. And are even finding some. Exciting times.”

It was a picture of unity between the climate-friendly Greens and business-friendly FDP, with Baerbock and Lindner even opting to apply a similarly futuristic choice of Instagram filter when posting the picture online. As some pointed out, this suggested that they might have found some common ground – as least as far as digitalisation was concerned.

Got to hand it to the novelist Habeck: he alone has the sheer hipster authenticity to post the picture uncropped and unfiltered.

Baerbock and Lindner, as befits digital-aware youth, have applied a really violent filter, Mayfair or something pic.twitter.com/tLiSb18GQe

But didn’t the SPD win the election?

That’s right. In a result that was unimaginable just six months ago, the SPD swept to victory on Sunday with 25.7 of the vote. The CDU/CSU, meanwhile, dropped almost nine points on their 2017 results and came out in second place, with 24.1 percent of the vote.

That could result in a ‘traffic light’ (Ampel) coalition, named after the three colours of its constituent parties: the Greens (green), FDP (yellow) and SPD (red). As some commentators have pointed out, a ruling traffic light would in many ways fit perfectly with the German psyche.

Germans will now be ruled over by a traffic light, the most feared and respected authority figure in the Bundesrepublik

On the other hand, it could result in a ‘Jamaica’ coalition with the conservatives, where the parties’ colours would match those of the Jamaican flag: CDU/CSU (black), FDP (yellow) and Greens (green).

Since the Greens and FDP both have to be on board for each coalition to work, they’ve decided to bypass talks with the SPD and CDU/CSU to start with. They first want to agree on basic lines of political cooperation, which will serve as a prerequisite for a “new start” in government policy in Germany. Only later do they want to approach the party they think could go into government with.

So which is more likely – Jamaica or Traffic Light?

Both are on the cards at the moment – but there are big issues with both, which have led some commentators to suggest that the fresh-faced politicians could be looking rather less fresh-faced by the time any of them can actually agree with each other.

“Now the coalition talks will begin,” one wrote, after news of meetings between the FDP and Greens broke on social media. “Traffic light or Jamaica, we’ll know by 2024.”

Even at this stage, it’s obvious what each of the party leaders want.

SPD chancellor candidate Olaf Scholz has spent every hour since the election pushing hard for an Ampel led by his party, something he’s terming a ‘progressive’ coalition.

“Something fits together if you have the desire to bring it together,” he said at an event of the Parliamentary Left in the SPD parliamentary group in Berlin. “It can be a government where three parties come together that have different but overlapping ideas of progress.”

With the SPD having gained the most support in the election, along with the FDP and Greens, there certainly looks like there’s a democratic mandate for this type of coalition. And 55 percent of people recently polled said this would be their preferred option – as opposed to 33 percent of people in favour of Jamaica.

Nevertheless, Armin Laschet, the leader of the CDU, is going against others in his party and forging ahead with his attempts to build a Jamaica coalition.

This constellation has the benefit of being the FDP’s clear preference, as it would fit better with their liberal brand of economics. But the leadership of the Greens would face fierce opposition from their own members if they opt to go ahead.

In fact, even before talks had officially begun, the Green’s youth wing called on Baerbock and Habeck to firmly reject a coalition with the CDU/CSU.

“The Green Youth would not go along with a Jamaica coalition with the CDU/CSU,” the national spokesman of the youth organisation, Georg Kurz, told the Neue Osnabrücker Zeitung on Wednesday. “Under no circumstances can we hoist the party that was explicitly voted out back into the chancellery.”

With all the headwinds facing Jamaica right now, it seems like the traffic light option could be marginally more likely. But in either case, there’s bound to be months of difficult coalition talks ahead.

What would each of the coalitions mean in practice?

That’ll be thrashed out behind closed doors over weeks, or even months. But here’s roughly what we might imagine each would look like:

With three-party coalitions on the cards, however, there’s no telling what might happen to each of the pre-election manifestos once ferocious and negotiations get underway. For the next few weeks at least, expect to be reading between the selfies to gain any kind of clue about what’s going on.