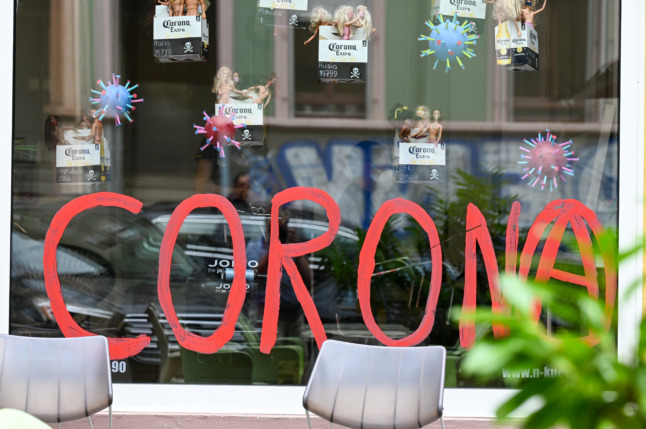 The word 'Corona' is painted onto the display window of a hair salon. Photo: picture alliance/dpa | Arne Dedert

The Berlin Senate has agreed on a new set of regulations for controlling the spread of Covid in the capital. From Saturday, September 18th, rules for attending numerous public spaces and events will change, and things could get significantly less convenient for the unvaccinated.

Here are the key things to remember about the new rules.

A few weeks back, Berlin’s state government took the landmark step of allowing the indoor spaces of capital’s famous clubs to reopen under a very specific set of rules. Essentially, club owners can only permit entry to the vaccinated (geimpft) and recovered (genesen) under a system known as 2G,  excluding people who can only present a negative test.

READ ALSO: Berlin clubs to reopen on Friday – but only to vaccinated and recovered

Under these conditions, people are allowed to dispense with their medical masks and those pesky social distancing rules to enjoy something quite similar to a ‘normal’ clubbing experience.

Now, other areas of public life are due to reopen under the same rules. Namely, infusion saunas, steam rooms and brothels. To visit these places, you’ll now need to have your digital or paper vaccine certificate to hand, or evidence that you have recovered from Covid in the last six months.

Another major change is that Berlin is introducing an ‘optional’ 2G for other venue owners and event organisers. From Saturday onwards, pubs, restaurants, cinemas, museums, gyms, hairdressers and other public spaces can all demand to see your vaccination pass or proof of recovery before letting you in – but they certainly don’t have to.

The benefit of doing so, for them at least, is that the exclusion of unvaccinated people means they can dispense with things like masks and social distancing. The downside is that they have to be clear about the rules for customers, be firm about checking all of this, and ensure their staff are fully vaccinated or recovered too. For customers who aren’t vaccinated, things are about to get trickier, because even if your favourite restaurant lets you in with a negative test one day, it doesn’t mean it will the next.

READ ALSO: EXPLAINED: What are the Covid health pass rules across German states?

That’s down to that fact that Berlin has opted for an incredibly flexible system that lets business owners switch between the ‘3G’ (vaccinated, recovered and negative test) and the ‘2G’ (just vaccinated and recovered) systems whenever they like. This could mean some days 3G, some days 2G, or it could be 3G at quiet times, 2G at busier times. It all depends on the business.

‘3G’ for places with a public remit

If the owner of public venues don’t opt for a vaccinated-only system, you can still expect to need either proof of vaccination, proof of recovery or a negative test to get in to most indoor areas.

This also applies to places with a particular public remit, such as public authorities and buildings such as the Bürgeramt, churches and general shops. These spaces must be open to all, but you will still need to show proof of one of the three ‘Gs’ to be let in. In addition, mask-wearing rules and social distancing will be enforced.

A key thing to remember about the Berlin legislation is that there are some important exceptions to the ‘2G’ rule for under-18s. Since the German Standing Vaccines Commission has only recently issued general recommendation for 12-17 year olds to get their Covid jabs, many youngsters won’t have had a chance to get both their jabs yet.

And since no vaccine has been approved for younger children, this group is exempt as well. Instead, they’ll have to get a negative test to join their parents at the cinema or restaurant in the future – even if the venue has opted for a ‘2G’ model.

For the other groups that can’t get vaccinated for medical reasons, things aren’t so easy. The Berlin Senate has decided against exempted these people as they believe it would be too risky for those with immune deficiencies or other vulnerabilities to go to places where they could potentially get infected.