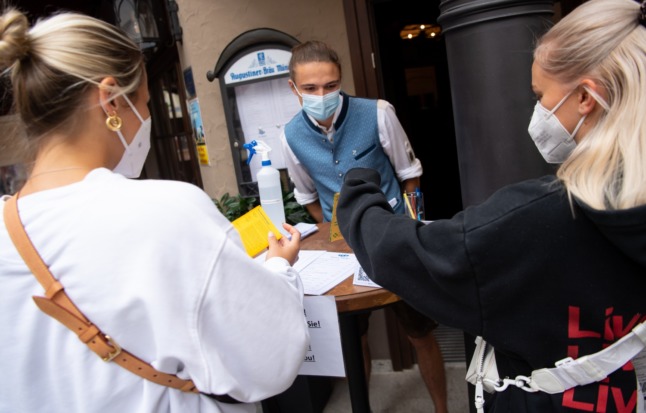 Customers showing evidence of their vaccination in Munich at the end of August. Photo: picture alliance/dpa | Sven Hoppe

In August, Germany formalised its version of a Covid health pass entry system – known as the 3G rules. That means that lots of public places – like restaurants, bars, cinemas and gyms, can only allow entry to people who are vaccinated (geimpft), recovered from Covid (genesen) or have tested negatively against Covid (gestestet).

Yet some states have been giving businesses and organisations the option to get rid of the ‘tested’ option altogether, effectively barring the unvaccinated.

READ ALSO: Barring the unvaccinated from public places ‘would cost less than a lockdown’

Hamburg was the first state to introduce this model, known as 2G (vaccinated and recovered) in Germany. The concept has faced criticism though due to the fact that it excludes people who have either chosen not to be vaccinated or have not been able to receive a vaccination due to health concerns, or because they are not eligible yet. The 2G model cannot be introduced for essential services, such as in the retail sector, in health settings or on public transport.

Some other states are now following suit, though they are interpreting the rules with varying degrees of strictness.

It comes as vaccinations have stalled in Germany, leading authorities to launch a fresh jab campaign, offering easy-to-access shots in communities – from kebab shops to the zoo.

The number of Covid infections and hospital admissions have also been rising, though the 7-day incidence of Covid cases has fallen slightly in recent days.

Experts fear that Germany will not achieve high enough vaccination coverage to get through the fourth wave in autumn and winter. As it stands, about 66.7 percent of the population has received at least one jab and 62.4 percent are fully vaccinated.

Here’s the state of play across Germany:

From Thursday, Baden-Württemberg will have a multi-stage warning system based on the occupancy of intensive care beds. In the first stage, for example, unvaccinated people will only have access to certain public areas with a negative PCR test. In the second stage if things get worse, the 2G model would come into force – meaning that unvaccinated people would no longer have access to restaurants, cultural and sporting events, among other things.

Rhineland-Palatinate has introduced a Covid traffic-light system with three warning levels based on infection incidence, hospitalisation rates and intensive care unit occupancy. Since Sunday, the ‘2G+ model’ has been in effect in the state. It means gatherings with an unlimited number of people are allowed for those who have been vaccinated and those who have recovered, plus a certain number of unvaccinated people who’ve been tested against Covid. There are no plans for future lockdowns. However, if there are rising incidence rates, unvaccinated people would no longer have access to events and hospitality venues, depending on the traffic light level.

In Schleswig-Holstein, the situation is similar to that in Rhineland-Palatinate and Baden-Württemberg. State premier Daniel Günther (CDU) made it clear that should the situation in hospitals come to a head again, the rules would be tightened. In this case, 2G rules would be introduced with the option of 3G.

The Berlin Senate has decided to introduce a 2G option model, which is expected to come into force on Saturday. In several sectors, such as restaurants or events, operators will then be able to decide for themselves whether to allow access to indoor areas only to those who have been vaccinated or recovered (2G) or also to those who have been tested (3G). In the case of 2G, previous Covid restrictions such as keeping distance or mask wearing, can be dropped.

Health senator Dilek Kalayci said Tuesday that there would be no exceptions for people who are not eligible to be vaccinated under the 2G rules.

Hesse’s state premier Volker Bouffier (CDU) said in Wiesbaden that Covid is increasingly developing into a pandemic of the unvaccinated. “That’s why the restrictions that continue to be necessary primarily affect them, while the vaccinated and recovered are less affected,” he said. In addition to the mandatory 3G rule in many indoor areas, Hesse – like Hamburg and Berlin – is therefore also introducing an optional 2G model starting this Thursday, so that event organisers and restaurateurs have the choice of allowing in only the vaccinated and the recovered. Mask and distance rules will not apply when the 2G rule is in force.

In Lower Saxony, the 2G model has so far only applied in discos, clubs and bars. Now it is to be extended and in future will also apply in the catering trade, culture, events and sport if organisers choose to do so. This move was announced by state premier Stephan Weil (SPD) on Tuesday in the state parliament in Hanover. When applying the 2G rule, the mask requirement and distance rule can be dropped.

Saxony also wants to introduce 2G as an option model, according to the state chancellery. This is to be possible for restaurants, facilities or events of up to 5,000 people, if the organiser decides.

Bavaria already has a “hospital traffic light” system in place, which assesses the situation. The 2G model – excluding the unvaccinated from many public places – is “theoretically possible and not prohibited, but not proposed by the state,” state premier Markus Söder (CSU) has said.

In Brandenburg, talks are underway about the introduction of a 2G rule. but nothing has been decided there yet.

In Thuringia, the ministry of health is considering the introduction of a 2G rule for certain areas.

The city-state of Bremen, which currently has the highest Covid infection rates in the country, has extended the current Covid rules until October 11th, while the 3G rule remains in place.

If the pandemic situation worsens in the coming months, Saarland’s state premier Tobias Hans (CDU) says he is not ruling out “2G rules,” but at the moment he sees no need for them.

In August, North Rhine-Westphalia’s state premier Armin Laschet, who’s also a chancellor candidate for the upcoming election, stressed that the 2G rule is not out of the question for the state.

Mecklenburg-Western Pomerania’s state premier Manuela Schwesig (SPD) does not want to introduce a 2G rule at the moment: “I think we have to continue to rely on 3G,” she said.