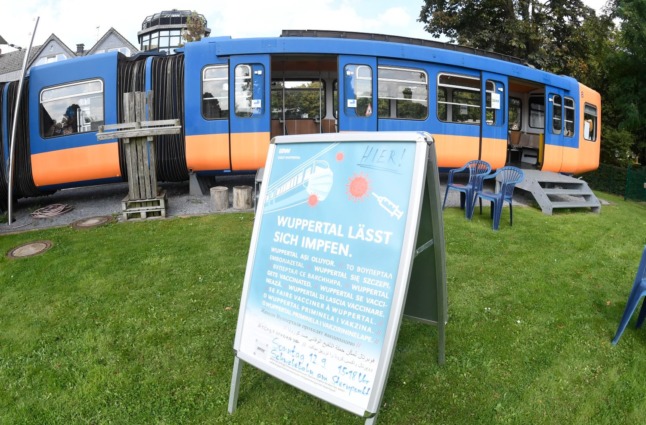 A sign to get vaccinated at a disused tram wagon in Wuppertal. Photo: picture alliance/dpa | Roberto Pfeil

Mobile vaccination teams were stationed across the country in places like libraries, buses, shops, churches, mosques and community centres to try and convince those eligible for the Covid jab to get it.

Vaccination centres that remain open will also welcome visitors. No-one needs a prior appointment under the campaign’s motto: #HierWirdGeimpft or ‘get vaccinated here’.

And there’s also a push to get more creative. In Berlin, for instance, residents can get a kebab with their shot from Wednesday to Friday at Kaplan Döner in the Wedding district. There’s also a chance to get vaccinated at the zoo and sports venues.

It comes as the 7-day incidence of Covid cases across Germany rose slightly to 81.9 infections per 100,000 residents. On Monday, health authorities reported 5,511 cases in 24 hours and 12 deaths. A week ago 4,749 new infections were reported.

‘Vaccinate against the fourth wave’

The action week was launched on Monday – but authorities said that easy access to jabs would continue to try and drive the vaccination rate up.

Angela Merkel’s chief of staff, Helge Braun, told ZDF on Sunday: “This does not end with the vaccination week, this will continue in the coming weeks.”

The aim is to help prevent a drastic fourth wave of the pandemic in autumn and winter.

“If we don’t do anything, it (a severe wave) will likely come,” Braun said. As a result, he said, hospitals would fill up again, particularly with unvaccinated people.

He said authorities needed to understand which population groups did not want to be vaccinated and see if they can be convinced.

Around 65.5 percent of people in Germany have received at least one jab and 62.2 percent are fully inoculated. That means around 34 percent of the population has not received a shot so far.

The head of the Association of Towns and Municipalities called for social networks to be used in a more creative way.

It’s always helpful “when celebrities from the arts, culture and sports make a clear commitment to vaccination and call for it,” Chief Executive Gerd Landsberg told Rheinische Post. “Just as we have reading ambassadors, for example, there should also be vaccination ambassadors.”

“The campaign that is now starting must be sustained – that is, over the next few months – otherwise we will lose the fight against the fourth wave.”

For the last weeks, politicians and health experts have been trying to figure how to convince sceptics to get vaccinated. The government brought in nationwide restrictions for entry into indoor spaces, meaning that people have to be vaccinated, recovered from Covid or tested.

Tests will no longer be free of charge from October 11th. This is intended to make life difficult for the unvaccinated.

German Chancellor Angela Merkel on Sunday called for people to take advantage of the offers.

According to experts, at least 75 percent vaccination coverage is needed to flatten the fourth wave, and significantly more to prevent it.