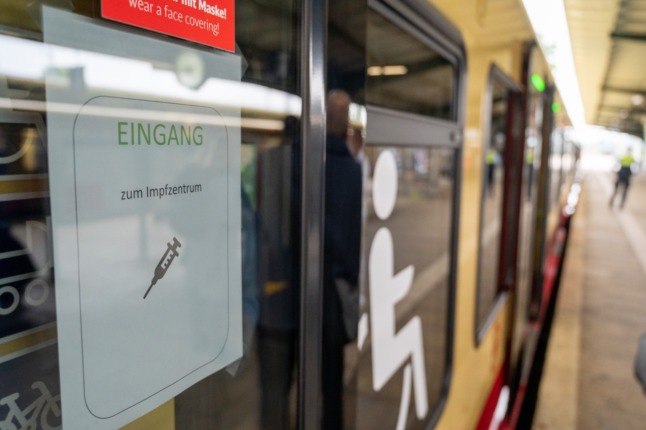 A sign for vaccines on the 'vaccination train' set up in Berlin recently. Photo: picture alliance/dpa | Christophe Gateau

More than 61 percent of the German population is fully vaccinated against Covid, while 65.9 percent have received at least one dose.

Now there are calls for new tactics, and a fresh vaccination campaign relaunch.

Many unvaccinated people are not anti-vaxers and can be convinced, said Klaus Reinhardt, president of the German Medical Association told DPA.

“To reach these undecideds, the vaccination campaign in Germany must be completely relaunched.”

The call to “roll up your sleeves” was useful in the beginning, he said. “But now we need much more targeted communication measures and low-threshold vaccination offers.

“The vaccination rate is too low throughout Germany, but especially in the eastern federal states,” Reinhardt said, adding that this is a cause for concern in view of autumn and winter.

OPINION: How to explain vaccine hesitancy in Germany

What are German officials doing so far?

The government wants to give the jab drive a boost with a nationwide campaign from next Monday.

Together with the states, the government is calling for easy-to-access offers to be made in as many places as possible – for example, in sports clubs, at the volunteer fire brigade, in pharmacies or multi-generation houses – with the motto: Hier wird geimpft or ‘vaccinate here’. Vaccination offers will be placed online at: www.hierwirdgeimpft.de.

On Wednesday, Health Minister Jens Spahn (CDU) planned to meet with the head of the RKI, Lothar Wieler, to discuss the status of the vaccination campaign, and what more can be done.

Ahead of the meeting, Spahn told RTL Direkt that he is surprised at how many people had not yet been vaccinated, even though they were not against it.

“We want to give them an easy opportunity (to get vaccinated),” he said.

The state governments in Saxony and Thuringia, the two regions with the fewest first-time jabs, are also counting on this.

“We see that education and talks are important to convince people who are still hesitant,” Saxony’s health minister Petra Köpping (SPD) told DPA. All available channels are being used, she said.

“We are making a lot of effort to bring vaccinations as close as possible to the people,” Werner said. She referred to vaccination campaigns in shopping centres, at sporting events and walk-in appointments.

Others are sceptical, such as Berlin’s mayor Michael Müller (SPD), who said on Tuesday that “we have done a lot of educational work”. He referred to letter and media campaigns as well as easy-to-access offers. But despite this, everything is going slowly, he said.

“I’m now coming to a point where I think maybe we’ve exhausted what we can do as politicians,” said Müller.

As the Our World in Data chart below shows, daily vaccine doses in Germany have dropped significantly since July.

‘Inconsiderate not to get vaccinated’

Thomas Krüger, president of the Deutschen Kinderhilfswerks – a children’s charity – called on all adults to take the protective lead out of consideration for children who cannot be vaccinated.

“It is completely inconsiderate not to get vaccinated,” he told the Neue Osnabrücker Zeitung. He said that a lot had been demanded of children in the past months by the closure of schools and daycare centres in order to protect the elderly. Now the consideration must go in the other direction, he said.

Meanwhile, the director of virology at Essen University Hospital warned of an overload of intensive care units.

“We are slowly damaging the health care system,” Ulf Dittmer told the Rheinische Post. In his clinic, there are 23 Covid patients with severe symptoms, of which 20 are unvaccinated. He said the youngest is just 20-years-old.

Dittmer called for a discussion on compulsory vaccination. The German government has so far ruled this out.

“We have to talk about that,” Dittmer said. He added that are no free places in North Rhine-Westphalia for treatment with a heart-lung machine due to the number of Covid patients.