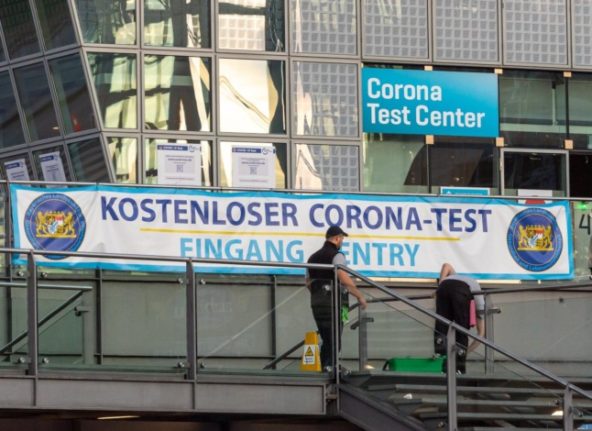 People in Germany need proof of a negative Covid-19 test for some activities across states, such as going to the gym, visiting a museum or dining indoors.

But if you are fully vaccinated or have recovered from Covid within the last six months, you can show proof of that instead of a test.

Now the free rapid test network – that was set up earlier this year to help monitor the spread of Covid while people got vaccinated – will likely soon cost money for the first time, under new plans put forward by the Health Ministry.

The plans have been sent to the 16 states and the Bundestag ahead of crunch talks happening next week on how Germany should deal with the pandemic in the cooler months.

When will Germany start charging for tests?

According to Berlin regional newspaper Tagesspiegel, which gained access to the government’s draft plans, the Health Ministry wants to stop allowing free rapid tests in mid-October.

By that point everyone will have had the chance to get vaccinated, the report by the ministry said, which means that taxpayers cannot be expected to cover the costs of tests.

The federal government has been covering the cost of at least one rapid test per week per person in Germany since March. Some states – such as Berlin – have been subsiding for one free Bürgertest (citizen test) per day.

However, the ministry notes that people who cannot be vaccinated – or groups where there’s no general vaccination recommendation, such as pregnant women or under 18s – should continue to have access to free tests.

The German government has ruled out compulsory vaccination, including for certain groups such as health workers.

But authorities still want to use initiatives to convince people to go and get the jab. Getting rid of free rapid tests in one way of making being unvaccinated inconvenient – and possibly pricey.

While those who are 100 percent against vaccinations may never be convinced of getting a Covid vaccine, it is hoped that hesitant people, or those who just haven’t got round to it yet, will go and get their jabs if they have to pay for tests out of their own pockets.

How much would tests cost?

That we have no idea about at this stage. At the moment, if you have to pay for a rapid test – for example if you’re travelling and don’t have access to a free one – it can cost around €30 to €50 but this varies widely across the country depending on the provider.

As for the taxpayer costs – a report on Thursday by the Rheinische Post found rapid tests have cost the federal government a cool €3.7 billion this year.

But they have been found to be effective, as part of a package of measures, at controlling the infection situation.

Plus, Germany’s free rapid test network has been praised by people across the world.

It was amazing, I was in Germany a few weeks ago, and you could get those tests for free everywhere and it was required for amusement parks and other activities, and children in schools got them twice a week. So impressive.

The issue of free testing being abolished will be discussed on August 10th at the meeting between Chancellor Angela Merkel and state leaders.

But it does seem that getting rid of free tests will be less a matter of “if” and more about “when”.

Government spokeswoman Ulrike Demmer recently stressed that rapid tests would “certainly not suddenly become chargeable overnight”, and would remain free for a while longer.

German authorities will want to wait until everyone has had the chance of receiving both their vaccine doses (or one in the case of Johnson & Johnson) and has had the 14-day period after their last dose to build up immunity before they get rid of free testing.

How many people will this affect?

It’s difficult to say at the moment because not everyone has had the chance to be fully vaccinated at this stage.

As things currently stand 53.6 percent of the population is fully vaccinated and 62.1 percent are partially jabbed. So about 38 percent of people haven’t been vaccinated yet.

READ ALSO: Covid infection rate in Germany goes up – but vaccines having an impact

We can expect vaccinations to increase in the coming weeks, although the rate of daily shots is much slower than before.

On Wednesday 536,961 jabs were delivered into arms of people across the country. And on Sunday just 115,113 vaccines were administered.

That’s a big drop from the dizzying heights of more than a million jabs being given out on some days just a couple of months ago.

What are decision makers saying about getting rid of free tests?

In the past days, calls for an end to the free tests in Germany have increased. Schleswig-Holstein’s state premier Daniel Günther has even brought an earlier date into the conversation: the end of summer: September 20th.

The cost of a rapid antigen test by trained staff is currently €20 to €30, depending on the provider, according to the state government in Kiel.

But in Bavaria’s coalition with the Free Voters, the pressure is not going down well.

“We can’t put a gun to everyone’s head who doesn’t want to be vaccinated,” Free Voters party leader and deputy state premier Hubert Aiwanger told the Tagesspiegel. Aiwanger has been facing questions over why he is not vaccinated himself yet.

The Social Democrats (SPD) support this proposal. Director of the SPD parliamentary group, Carsten Schneider, said, “In the long run, we will not be able to afford free tests.”

“Corona tests should become chargeable when everyone could have been vaccinated – that is, in a few weeks,” said SPD chancellor candidate Olaf Scholz recently.

Others who aren’t so jazzed about the idea include Green Party health politician Janosch Dahmen who warned against the assumption that people could be persuaded to get vaccinated in this way.

“As a doctor and politician, I am not convinced that we will get people to vaccinate at the current time with debates about pressure, coercion and punishment,” he stressed.

German Interior Minister Horst Seehofer (CSU) said: “As long as the pandemic continues, I would not change anything about freedom from costs. I want those who are neither vaccinated nor recovered to have the chance to test,” Seehofer said.

“How many people do you think will stop taking or be able to take the test if it’s not free? With that, there could be a hidden infection event,” he warned.