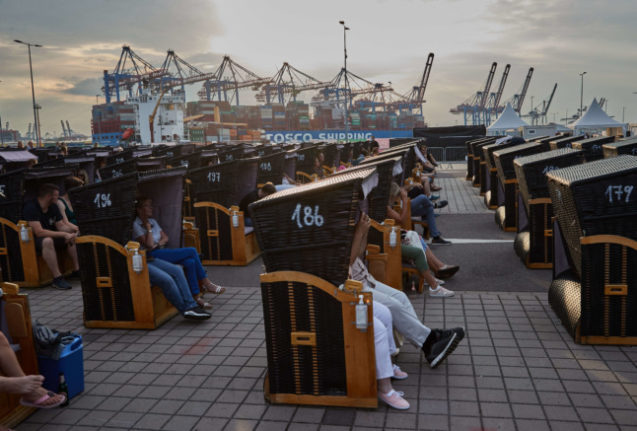 Visitors enjoy a concert at the Steinwerder Cruise Center on July 13th. The German Health Ministry is said to want events such as this to close to unvaccinated people if infection rates rise significantly. Photo: picture alliance/dpa | Georg Wendt

The proposals were revealed in a report obtained by DPA, in which government health officials set out their vision for the coming months.

Looking ahead to a potentially difficult autumn and winter, ministers allegedly argued that continued measures were needed “in order to protect the health system from excessive strain and to shield the groups of people who cannot yet be vaccinated from a potentially serious illness”.

However, due to a relatively high number of vaccinated people in Germany, people are unlikely to face the kinds of restrictions they saw in 2020 and the early months of 2021, according to the Ministry’s report .

“A drastic lockdown like the ones we saw in the second and third waves will in all probability not be necessary,” they wrote.

“A fourth wave of Covid infections has begun, albeit still at a low level. In addition to the increased influx of infections by people returning from travel, people are behaving almost the same as they were in the times before the pandemic.”

READ ALSO: Covid infection rate in Germany goes up – but vaccines having an impact

‘3G rule’ to remain – but could be tightened

In particular, the Health Ministry is said to be calling for a continuation of the ‘3G’ rule (geimpft, genesen, getestet), which dictates that people should be either vaccinated (geimpft), recovered (genesen) or tested for Covid (getestet) in order enter certain premises or take part in certain events.

Regardless of infection rates, the Health Ministry is believed to want the 3G rule to continue until at least early or mid-September.

If infection rates go up significantly, however, the rules could be tightened further, meaning that only recovered or vaccinated people – rather than those with a negative test – would be allowed to visit the likes of hotels, restaurants, beauticians or large public events.

Mask-wearing ‘should continue until at least 2022’

According to media reports, the Health Ministry is also pushing for a stringent continuation of mask-wearing and social distancing rules until the early months of 2022.

The three basic rules – hygiene, distance and mask-wearing – should be followed at all times when groups of people are gathered in enclosed spaces, ministers reportedly said in the plans. This is especially important when the vaccination status of attendees is unknown or when vulnerable people are present, they said.

The report from the Health Ministry was sent to state leaders and the federal parliament in advance of a crunch meeting later this month.

On August 10th, Chancellor Angela Merkel with meet with the state premiers in each of the German states to thrash out measures to combat the fourth wave.

The latest figures show 53 percent of the population is fully vaccinated, and 62 percent have had at least one jab.