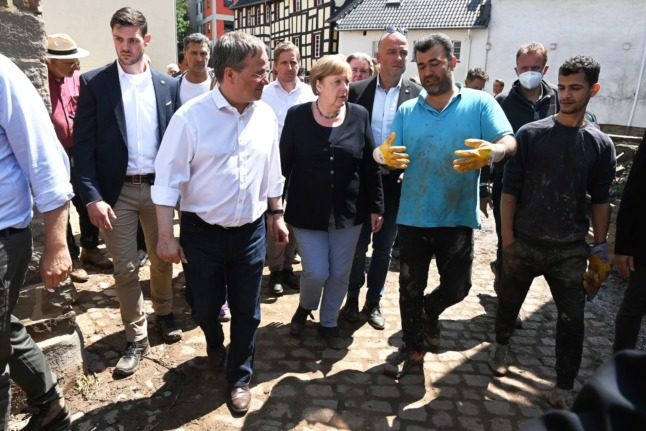 A week into the region’s worst flooding disaster in living memory, which has killed at least 174 people in Germany, and 201 in total in Europe, the conservatives (CDU/CSU) and Social Democrats’ “grand coalition” government unblocked some €400 million ($470 million) in immediate relief.

Half will come from the federal government of Europe’s top economy and the rest from the 16 regional states, Finance Minister Olaf Scholz said.

“We will make sure that life can go on,” Scholz told reporters in Berlin.

He said the coming months would bring a “billions-strong reconstruction programme to clear the devastation and restore infrastructure” including roads, bridges and railways.

Power and drinking water supplies were compromised in many areas while mobile communication networks were still down.

The damage caused by the floods is likely to cost the insurance industry up to five billion euros ($5.9 billion), the GDV insurance industry association said, calling the disaster “one of the most devastating storms in recent history”.

However, the real cost is likely to be much higher as less than half of Germans in the affected states are insured against heavy rain and floods, the association said.

Merkel told reporters on a visit to the badly hit medieval town of Bad Muenstereifel on Tuesday that Berlin would come through to help in the short and long term.

“This was flooding that surpassed our imagination when you see the destruction it wrought,” Merkel told reporters after touring what Bild newspaper called the “apocalyptic” wreckage of the 17,000-strong community in North Rhine-Westphalia (NRW) state.

She said ministers would clear the way for emergency assistance for citizens who had suffered losses and do everything in their power “so that the money is with people fast”.

“I hope it will be a matter of days,” she said, noting that she had met local victims “left with nothing but the clothes on their backs”.

The initial amount is reportedly expected to be around €400 million ($470 million).

"We've been meeting people who lost everything."

After the flood disaster, Angela Merkel expresses her condolences to those affected and promises swift financial support. pic.twitter.com/F0ZMuYmgBf

‘Months if not years’

Merkel was joined on the visit by NRW premier Armin Laschet, head of her Christian Democratic Union and the frontrunner in the race to succeed her as chancellor after a general election on September 26th.

Laschet called for the rescue funds to reach victims “unbureaucratically and as fast as possible”, pledging to double Berlin’s assistance with a cash injection from his own state budget.

He warned it could take “months if not years to rebuild”.

A total of 125 people are now confirmed to have died in the flooding in Rhineland-Palatinate state, with at least 48 victims in NRW and one in Bavaria.

“However by now it is unfortunately very likely that we will only be able to recover victims, not rescue them.”

Scholz, the chancellor candidate for the Social Democrats, said Germany would have to prepare for increasingly frequent natural disasters triggered by climate change.

“We’ll manage it together,” he told the daily Rheinische Post.

“What’s crucial for me is that there are consequences from what’s happened,” including plans to make changes to Germany’s disaster prevention systems as well as climate protection measures, he said.

Annalena Baerbock, the Greens’ flag bearer for the election, called for a more coordinated approach to warning citizens while stressing the country must prepare better for extreme weather events due to global warming.

“But that’s meant that the disaster protection measures haven’t been sufficiently developed, although experts have been warning for years about climate-driven extreme weather events.”

Merkel, who is retiring this year after 16 years in power, on Tuesday defended Germany’s preparations for deadly disasters, saying even experts had been taken by surprise by the sheer brutal force and speed of last week’s rains, which left many stricken towns looking like war zones.

“Now we’ve got to look at what worked and what didn’t work, without forgetting that this was flooding as we haven’t seen in a long, long time,” she said.