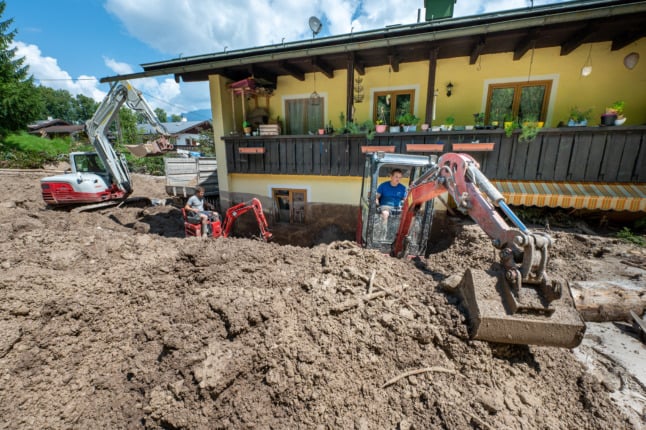 Speaking to DPA on Monday, Mayor Matthias Berger said that the people in the affected regions must be patient.

“Politicians will keep their word,” he said. “There will be money. But it will take time – because bureaucracy and catastrophe are not compatible. The reconstruction will take years.”

In 2002, Saxony was hit by what was then described as the ‘flood of the century’ after heavy rain led to the Elbe breaking its banks, killing dozens of people, destroying houses and leaving thousands of people without a home.

According to Berger, electricity, gas and telephone in Grimma were brought back up and running very quickly by the large corporations after the flood – but for larger infrastructure projects such as the rebuilding of houses, bridges and streets, the region faced long delays.

“Back then we only restored everything in a makeshift way,” Berger explained.

To speed up repairs in Grimma, roads were made safe again with gravel and stone dust, but it took some time before they got an asphalt surface.

“Germany is sedate, slow, bureaucratic,” Berger said. “But once it works, it comes with force.”

A ‘tour de force’ from politics and industry is needed

The federal and state governments have already promised extensive financial aid for the affected communities in North Rhine-Westphalia and Rhineland Palatinate, and a task force for the repair of broken bridges, tracks, roads and cell phone masts was called into action by the Transport Ministry on Monday.

But a survey by DPA has revealed that, as with Grimma, the efforts to rebuild Germany’s flood-hit areas could take years, and will face numerous obstacles, from staff shortages to a lack of materials and funds.

In the case of the Deutsche Bahn railway tracks and roads alone, the federal government believes that at least two billion euros’ worth of damage has been done.

“After the Elbe flood in 2002, it took about three years for the greatest damage to be repaired and five years for the affected areas to look pristine again,” Reinhardt Quast, President of the Central Association of the German Building Industry (ZDB) told DPA.

Managing the reconstruction of destroyed houses, roads and bridges in spite of busy construction companies and material shortages will require a ‘tour de force’ on the part of business and politicians, he said.

Though everyone is hoping for a rapid return to normality, industry experts believe there are numerous hurdles that stand in the way of rapid reconstruction – starting with awarding contracts to construction companies.

“We have to make sure that we make the whole subject of tendering and awarding as low-threshold as possible,” said Alexander Handschuh of the German Association of Towns and Municipalities. “If we have to tender the construction work across Europe, we lose half a year just for the tender and the award procedure.”

If necessary, missing materials must be brought into the flood areas from elsewhere, says the ZDB building association. A digger assists with emergency repairs to a bridge over the river Ahr. According to the German construction industry, rebuilding the flood-hit areas will ‘take years’. Photo: picture alliance/dpa | Philipp von Ditfurth

“If pipes have been washed away, they have to be brought in from the rest of the country,” said Quast. But even transporting the materials isn’t always easy, since bridges have also been destroyed.

Those who want to rebuild their houses will also face painful delays as authorities determine which areas are still safe to build on. Quast believes that homeowners will have to be realistic about the timespans involved in both planning and construction of a new home.

“You can’t build a house in three days,” he said.

No running water ‘for weeks or months’

It is already becoming apparent that many repairs will take much more time than desirable – especially when it comes to basic utilities.

At present, thousands of residents of flood-hit areas are relying on generators for their electricity supply, as technicians from local suppliers are flown in by helicopter to check the network stations.

“We are currently checking every local network station and every transformer station for damage. Even when the voltage is already back on, we can only operate it when we can be sure that it has not been damaged,” Sarah Schaffers from the network operator Westenergie told Welt. “Cleaning and repairing with mud is not enough, careful tests are necessary.”

Meanwhile, regional utilities supplier Energienetze Mittelrhein has warned that, in the worse-case scenario, the restoration of the gas supply in the Ahrweiler district in Rhineland-Palatinate could take months.

READ ALSO: IN PICTURES: The aftermath of Germany’s catastrophic floods

“The gas line is torn up. Completely destroyed,” said company spokesman Marcelo Peerenboom, adding that several kilometres of pipeline will have to be completely rebuilt.

“Unfortunately, it will take weeks or months before the gas supply is back there. For the citizens that means: cold water, and when the cooler weather comes, cold apartments too.”

In addition to internet, electricity and gas, the water supply has also been badly affected.

“It looks as if the infrastructure has been so badly destroyed that in some places that there may be no drinking water for weeks or even months,” the Mayor of the Altenahr, Cornelia Weigand, told Bild.