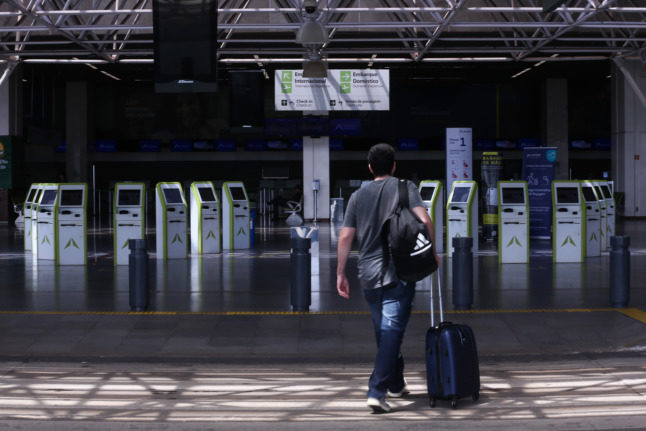 A man walks with his luggage through a near-empty Juscelino Kubitschek Airport in Brazil. Brazilians have been forbidden from travelling to Germany since January 2021. Photo: picture alliance/dpa/Agencia Brazil | Marcello Casal Jr

Despite the advances in vaccination rates and the recent decision to ease the restrictions for five Delta variant countries, over 250 students and workers from Brazil – which Germany says is a ‘virus variant area of concern’ – are still prevented from entering Germany.

The ‘Barred from Germany’ campaign, which is fighting to overturn the decision, say that the individuals affected all have genuine reasons to be in Germany and risk losing their professional and academic opportunities abroad if the travel ban continues.

The group has created an online petition, which currently has over eight thousand signatures, and they have submitted multiple letters to German and Brazilian authorities requesting the exemptions from the transport/entry ban currently applied to virus variant areas.

“We are a small group of people who represent a low risk of contamination, committed to following the required health protocols, which are proven to be very effective, and we ask the German authorities to allow the entry of Brazilian students and the issuing of long term visas so that we can start our activities in Germany as soon as possible”, they state in a recent letter to the EU Commission.

Ban has been in place for six months

The predominance of the Gamma variant of Covid-19 in Brazil led the country to be classified as an area of variant concern since January 19th – the second longest travel ban from Germany, after South Africa. As of July 5th, there are currently 11 countries in this category.

India, Nepal, Russia, Portugal and the UK were in this risk category but were recently downgraded to high incidence areas, from which people – including tourists – can enter Germany by proving compliance with the required health measures.

According to the Robert Koch Institute (RKI), countries are classified as an area of variant concert when there is a “spread of a virus variant (mutation), which is not concurrently widespread in Germany and from which it can be assumed that a special risk emanates”.

During the almost six-month long blockage, students and long-term visa applicants from Brazil have contacted German and Brazilian authorities, such as ministers and ambassadors, requesting the exemption from the travel ban.

The group also argues that, since the travel ban has been lifted for football-related commissions such as Euro 2020 transiting from all over the world, “these decisions are more likely to be due to political and economic reasons than of scientific nature”.

“It’s very interesting to read that the European Commission consider the travel ban from the United States to be an ‘outmoded strategy for containing coronavirus’, while they continue to maintain travel bans from multiple countries,” they said in a recent tweet.

Facing an uncertain future, many Brazilian students and workers are concerned that further delays will lead to missed opportunities in Germany.

“I’m afraid I won’t be able to finish my doctoral research – because it partially depends on my stay in the country – or that I’ll only be able to travel too close to my deadline,” said doctoral student Carla Webber, who was awarded a scholarship for 12 months by the Catholic Academic Exchange Service (KAAD) in March.

“My university and the scholarship provider want to know when my departure date is, but unfortunately I don’t have one yet. My German advisor is really understanding, however my frustration of finally receiving the funding and maybe not being able to enjoy it is really big,” she added.

Campaigners: ‘We want to travel safely’

Discussing the frustrations of their current situation, spokespeople for the group told The Local that they were keen to comply with all the rules if granted entry into Germany.

“Work and education should always be considered essential motives, and workers and students should never be prohibited from taking up their jobs or starting their studies,” said Ursula B. Marinho, one of the group representatives who is applying for an Au Pair visa.

“We want to travel safely and are willing to comply with all protocols required by the German government, such as supervised quarantine and proof of negative PCR tests.”

READ ALSO: Reader question: What are the Covid-19 test requirements for entering Germany?

Isis da Cruz B. de Araújo, another representative for the group who needs to apply for a visa to continue her Masters, explained that Brazilians already face an uphill struggle when continuing their education in Germany.

“For us Brazilians, getting the opportunity to study at a German university is not a simple task and it is even more complex when it comes to scholarships and positions competed by people from all over the world,” she told The Local.

“This worldwide competition is also present in all kinds of job and research selections that demand a long-stay visa to Germany.”

No ‘concrete action’ from German authorities

In their email responses to Brazilian students and long-term visa applicants representatives the German authorities have so far expressed their support, but offered no concrete action.

“We know that the measures taken come with great limitations and sacrifices. And so the great discipline with which the measures are being implemented is all the more commendable,” the Federal Ministry of the Interior, Building and Community told campaigners on June 28th. A spokesperson for Foreign Minister Heiko Maas (SPD) has expressed support for the group, but made no promises about easing the ban on students and workers. Photo: picture alliance/dpa/AFP/POOL | Tobias Schwarz
In another email response from the same date, the Federal Foreign Office reiterated that the restrictions are necessary to contain the spread of virus variants of concern.
“We sincerely hope that, with the growing success of vaccination campaigns and improvements in the overall pandemic situation, traveling from Brazil to Germany will soon be possible again, in particular for the purpose of studying or working,” wrote an officer on behalf of Federal Minister for Foreign Affairs Heiko Maas.
The Local has approached the Foreign Ministry for comment.