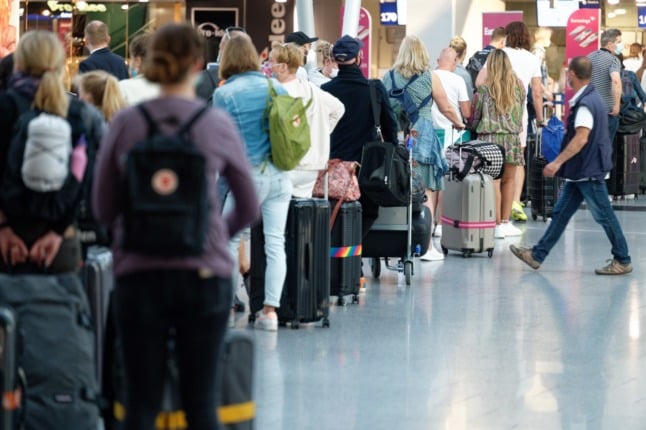 The UK, Portugal, India, Nepal and Russia were officially removed from Germany’s ‘virus variant of concern’ list on July 7th.

India – where the Covid Delta variant was first discovered – was classified as a virus variant area at the end of April, followed by Nepal and the UK in May. Fellow-EU country Portugal, as well as Russia, were both added to the list on June 29th.

– Airlines, bus and train companies are not allowed to transport people from virus-variant areas to Germany unless they are German citizens or have residence in Germany.

– Anyone entering Germany from virus-variant areas must quarantine for 14 days – even if they are fully vaccinated or recovered from Covid.

There are several other virus variant areas of concern, including the South Africa and Brazil. This is the first time that virus variant countries are being downgraded in risk status in Germany since the newest travel rules came into force earlier this year.

So is Germany getting rid of all the restrictions?

No. These countries will be added to the ‘high incidence’ list, which is for regions with more than 200 Covid cases per 100,000 people.

It does, however, mean that the travel ban will be lifted for these countries, opening Germany up to tourists or for other non-essential travel.

– People who are fully vaccinated or have recovered from Covid-19 coming from high incidence areas do not have to quarantine on arrival. They can also show their proof of vaccination/recovery before boarding a flight to Germany instead of a negative Covid test.

– Note that the German government still warns against travel to high incidence areas, but there are no bans in place.

“With the entry into force of the new status, the corresponding regulations for entry from a high incidence area also apply,” a Health Ministry spokesman told The Local, meaning the rules come into force with immediate effect from tomorrow.
Those currently in quarantine after travel from one of the five countries in question would therefore be able to shorten it after five days with a negative Covid test.
For anyone who’s fully inoculated or recovered from Covid who’s currently in quarantine from one of the soon to be former virus variant areas, uploading proof of vaccination or recovery to Germany’s Entry Registration Portal will allow you to enjoy the great outdoors once again. Contact your local health office if you have any questions, though.
READ ALSO:

The Our World in Data chart below gives an idea of the daily new Covid cases in the five countries.

The Health Ministry spokesman told us: “As of July 7th, 2021, Portugal, UK and India, among others, will be classified as high incidence areas.

“The background to the decision is that the Delta virus variant will continue to spread in Germany and will soon dominate.”

The latest official report from the Robert Koch Institute (RKI) released last week estimates that the Delta variant accounts for 37 percent of new Covid cases in Germany, up from 17 percent the previous week.

But the real figure is thought to be even higher. RKI experts said last week they believe it already accounts for at least half of new Covid infections in Germany.

READ ALSO: Delta variant now accounts for ‘at least half’ of all Covid cases in Germany

That means it is rapidly replacing the Alpha variant – which was first detected in the UK – as the dominant strain nationwide.

Experts in Germany also wanted to make sure that vaccines are found to work well against the Delta variant before easing the rules.

The vaccines approved in Germany – Pfizer/BioNTech, Moderna, AstraZeneca and Johnson and Johnson have been found to provide effective protection against severe courses of a Covid Delta infection.

Does this open up tourist travel between Germany and these countries?
It does make it a lot easier – especially because the entry ban is lifted. But there is still uncertainty. especially concerning the situation for people in Germany travelling to the country in question.
In the UK, for example, people arriving from Germany still currently have to quarantine for 10 days, which can be shortened to five days in England.
The British government says it will open up travel without quarantine to fully jabbed people but there are no firm plans on exactly when and how this will happen.
The German government also still warns against tourist travel to ‘high incidence areas’ – and, as we mentioned above, unvaccinated people do have to quarantine when coming to Germany from a high incidence area.

Aren’t people in Germany worried about the Delta variant pushing up cases?

Yes – the 7-day incidence rate in Germany is less than 5 cases per 100,000 people right now. But experts fear that the number of cases will be pushed up dramatically as we’ve seen in other countries including the UK.

It means that the race to vaccinate before the Delta variant manages to make its presence even more felt is on.

Merkel on Monday told her party leadership that the country needed to vaccinate 80 percent of the population to provide enough protection.

“If this vaccination quota is reached in time, a pronounced fourth wave in the coming autumn and winter seems unlikely,” the public health institute said in a paper released on Monday.

“The results [of our study] show that under the assumptions made, in particular an increasing dominance of the Delta variant, the vaccination campaign should be continued with high intensity.”

On Tuesday, medical experts also spoke of the need to vaccinate children in order to achieve herd immunity.

Vaccinations are possible in children as part of a decision on a case-by-case basis by parents with their children and the doctors. The only vaccine approved for this age group so far is BioNTech/Pfizer. So far, there is no approved vaccine for children under 12.

Anything else we should be thinking about?

Germany will be watching the situation closely in the countries being downgraded in case the situation changes.
With England set to loosen restrictions on July 19th, there will likely be concerns about what might happen – for example, will another variant of concern emerge in future? If that happens, Germany would likely put the UK back on the virus variant list.

A Health Ministry spokesman told The Local: “Virus variant areas are risk areas with special characteristics. These can be areas in which a virus variant (mutation) of the SARS-CoV-2 coronavirus has occurred widespread, which is not also widespread in Germany and which can be assumed to pose a particular risk. The predominant variant in Germany is used as a comparison.

“Such special risks can arise, among other things, from the fact that the virus variant is presumably or verifiably more easily transmitted, because of another property it accelerates the spread of the infection, increases the severity of the disease or against which the immunity achieved by vaccination or survived Covid infection is weakened.”

Do children also have to quarantine when coming from a high incidence or virus variant area?

Although travel will be much easier for fully vaccinated people coming from these countries, it could still be tricky for families.

That’s because the quarantine regulations for unvaccinated people when entering from certain countries to Germany “apply to everyone, children and adults alike”, said the Health Ministry spokesman.