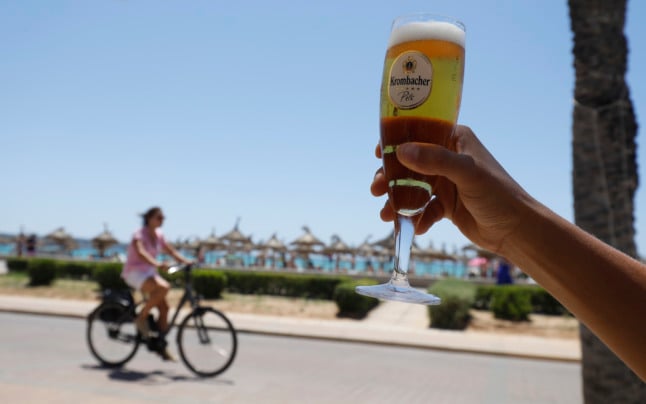 A tourist drinks a pint of German beer in Spain, where the travel ban has been lifted in a number of regions. Photo: picture alliance/dpa | Clara Margais

From July 1st, the German government is dropping its blanket travel warning for tourists, meaning that holidaymakers now have a green light to go abroad this summer.

More specifically, a number of countries that are considered ‘basic risk’ areas – including parts of Croatia, Georgia, Mexico, Spain and Turkey – are no longer subject to an official travel warning.

Until now, countries could fall under the scope of the travel warning if they were classified as ‘basic risk’ – which basically means countries with a 7-day incidence of between 50 and 150 cases per 100,000 people.

Now, in line with new guidance across the European Union, countries must have a 14-day incidence of 200-500 cases, or be classed as a ‘virus variant’ area, for a travel warning to be issued.

READ ALSO: Everything that changes in Germany in July 2021

The changes affect around 80 countries and provinces that are currently on the ‘risk list’. Around 40 still remain subject to a warning.

In addition, a number of European countries have recently been placed on Germany’s ‘non-risk’ list, meaning there is neither a warning nor a recommendation against travel – though the Foreign Office urges all tourists to be careful nonetheless.

That essentially means that residents of Germany will now be able to enjoy simplified travel to numerous foreign countries, at least as far as controls at the German border are concerned.

Not exactly. In the words of the Foreign Office, “A travel warning is an urgent appeal not to undertake unnecessary trips. The travel warning is not a travel ban. Travellers decide at their own risk whether to go on a trip.”

However, the existence of a travel warning is not to be taken lightly. Before the pandemic, it was generally reserved for war-zones or occupied regions such as Syria, Yemen or the Gaza Strip.

Beyond immediate danger, the existence of a travel warning can lead to other consequences for the traveller, such as invalidating health or travel insurance – so the removal of the warning could also be good news for your coverage.

Do I still need to show a negative test at the border if there’s no travel warning?

Unfortunately the swabs are set to continue for the time being – unless you’re fully vaccinated or have recovered from Covid – even if you’re going to a basic risk or non-risk area.

Essentially, anyone travelling in or out of Germany will still have to show proof of vaccination or recovery from Covid – or a negative Covid test – either in paper form, or using the EU-wide CovPass. The screen of a mobile phone bearing a QR code as part of a EU Digital Covid certificate. Photo: ERIC LALMAND / BELGA / AFP / Belgium OUT

If you’re coming from a ‘virus variant area’ you still have to provide proof of a negative test before entering Germany even if you are vaccinated, and you must be part of the exceptions allowed to enter, such as being a resident or citizen.

In a press conference held alongside Health Minister Jens Spahn on Thursday, Interior Minister Horst Seehofer said that checks at airports by border control staff – and monitoring of quarantine orders by health offices – would be stepped up over summer.

If you’re coming into Germany from a ‘non-risk’ area, however, you won’t have to register on the Einreiseanmeldung.de portal.

Could this have anything to do with the summer break?

Indeed it could. The announcement comes a week after schools in a number of northern states – including Berlin and Schleswig-Holstein – broke up for the summer holidays, and just a few weeks before the rest of the states follow suit.

“After long months of lockdown, we can look forward to some normality, and that also applies to travel,” said German Foreign Minister Heiko Maas (SPD). “Just as we have learned to deal with the virus in everyday life, it will also be with us on the road this summer – on the plane, in the hotel or on the beach.”

According to Mass, the decision was also made possible by the fact that the European Union has managed to standardise rules on negative tests, vaccinations and recovery from Covid-19 throughout the bloc, as well as reaching joint agreements on the risk categorisation of countries, as mentioned above.

From July 1st, a digital Covid vaccination certificate will be rolled out across the bloc, meaning people from Germany can use their ‘CovPass’ – a digital certificate of vaccination – to travel around the EU and Schengen.

READ ALSO:  EXPLAINED – How to get your digital Covid vaccine pass in Germany for EU travel

As we mentioned, there are now several ‘non-risk’ areas for tourists to visit, including numerous EU and Schengen Zone countries, as well as several in Asia, Africa, and the Caribbean.

Germany’s neighbouring countries of Austria, Denmark, the Netherlands, and Poland, for example, are currently classed as ‘non-risk’ countries, meaning smoother travel to these countries is now possible.

Of course, the classification of different countries is changing all the time as new variants spread and infection rates rise and fall, so it’s best to keep an eye on the Robert Koch Institute’s list of designated risk areas before you make plans to travel. It’s also important to note that, while certain countries outside of the EU or Schengen may be on Germany’s ‘safe list’, the governments in these countries may themselves have placed strict controls on arrivals from Germany – so it pays to do research on the policies of both governments before getting on a place.

What rules are in place for different risk categories?

According to the German Foreign Office, the following restrictions apply from July 1st:

Do I still need to quarantine?

That depends on where you’re re-entering Germany from. If you’re entering from a basic risk area, you can avoid the standard 10-day quarantine by providing a negative test or proof of full vaccination or recovery from Covid.

If you’re travelling from a high-incidence area, you can avoid the same quarantine period by providing proof of vaccination or recovery, or end it early (after five days) by providing a negative test.

For anyone coming from a virus variant area, the rules are far more stringent: you must quarantine for 14 days, even if recovered, tested or fully vaccinated.

However, Health Minister Jens Spahn has indicated that he could relax the rules on people entering from some of these countries – which currently includes Portugal, the UK and Russia – if the proportion of Delta variant cases continues to rise in Germany.

What other advice is the German government giving to tourists?

While the travel warning has been lifted, the Foreign Office has emphasised that this is no excuse to party like it’s 2019.

When travelling abroad, the government is urging tourists not to lose sight of the threat of the virus or drop any of the measures associated with fighting it, such as masks, hygiene and social distancing. “Hope and confidence will return to Germany in the summer,” said Maas.

“With all the justified confidence, the absence of a travel warning is not an invitation to be carefree. Travel with common sense and a sense of proportion, that is the motto of this summer. The danger posed by the virus and its mutations is far from over.”

The Foreign Office has also made clear that dispensing with the travel warning is not an invitation to travel to risk areas for no good reason.

“Even if there is no travel warning for a country, travellers should always inform themselves about the travel and safety information [of that country,” their Covid-19 guidance reads. “This also contains important information on entry restrictions, quarantine regulations for travellers and other restrictions.”

What are other people saying?

Unsurprisingly, tourism stakeholders are thrilled at the loosening of travel restrictions.

Welcoming the news earlier in June, German Tourism Commissioner, Thomas Bareiß, described the removal of the travel warning for risk areas as an important message for the travel industry.

“The stigmatisation of travel is finally coming to an end,” he said.