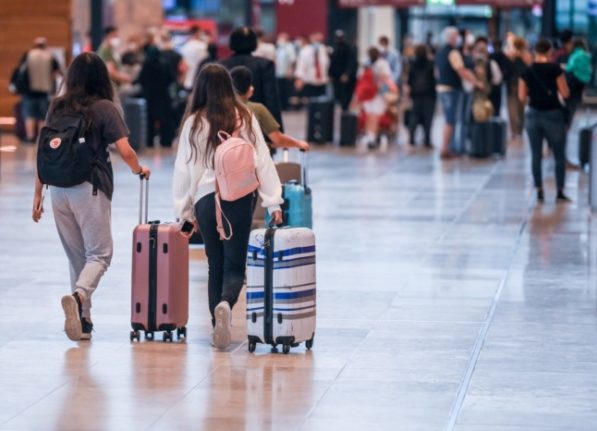 During a press conference that focused on Germany’s travel rules, Spahn said that the government could downgrade countries like the UK and Portugal where the Delta variant is dominant from ‘virus variant areas’ to ‘high incidence’ areas – when the share of the Delta variant reaches a comparable level in Germany.

That could result in the entry ban being lifted – and people who are fully vaccinated against Covid would not longer have to quarantine.

However, it’s not clear if the entry ban on non-residents travelling to Germany would be eased in this case.

Germany expects the Delta variant to account for up to 70 to 80 percent of infections in July, said Spahn. It is already the dominant variant in some countries including the UK which has seen a massive hike in cases in the the last weeks.

Spahn emphasised that Delta would “soon be the dominant variant in Germany too”.

The Heath Minister, who belongs to Chancellor Angela Merkel’s CDU, emphasised the importance of people being fully vaccinated.

New studies show that people who are fully rather than partially jabbed are well protected against the Delta variant, which could mean that the rules could be reassessed soon, Spahn said.

New: Jens Spahn, the German health minister, has said 🇩🇪's tough restrictions on travel from 🇬🇧 could be loosened in the coming days if evidence continues to show that the Delta variant is becoming dominant in 🇩🇪 and that double vaccination offers strong protection against it.

Given the increasing spread of Delta and research showing that full vaccination protects well against it, “we will look at the situation in the next few days”, Spahn said.

“If both of these things are confirmed, we will then be able to treat Portugal and the United Kingdom as high-incidence areas”, rather than variant countries, he said.

The focus during the news conference from journalists asking questions was on Portugal and the UK but it could apply to other ‘virus variant’ countries where the Delta variant has been spreading such as India and Russia.

However, Spahn did say lots of factors are taken into account when looking at the risk classification of countries, including the vaccination rate and other restrictions.

He also said travel restrictions would only be downgraded for ‘virus variant’ countries where the variant is also widespread in Germany, such as the developing situation with the Delta strain.

Experts from the Robert Koch Institute (RKI) estimate that half of new Covid cases in Germany are currently caused by the Delta variant. Yet the overall incidence remains very low – on Thursday there were around 5 cases per 100,000 people within seven days.

Spahn said it was extremely important to keep up the pace of vaccination. So far, two-thirds of all adults in Germany have received at least one jab. About 55 percent have now received their first dose, while 37.3 percent have been double jabbed.

On Wednesday Germany surpassed the US on the proportion of the population who’ve received first jabs.

What are the travel rules?

It came as Germany lifted its blanket travel warning against tourist travel on July 1st.

But there are still strict rules in place for so-called ‘virus variant’ countries. Anyone who is allowed to travel from ‘virus variant areas’ – such as German citizens and residents – has to complete a 14-day quarantine when they return to Germany even if they are fully vaccinated.

In ‘high incidence areas’ (areas which have more than 200 cases per 100,000 residents), vaccinated people and those who’ve recovered from Covid-19 do not have to quarantine.

People who have not been vaccinated have to self-isolate for 10 days, with an option to end it after five days with a negative test result.

Anyone entering Germany by plane has to present proof of a negative Covid-19 test, proof of vaccination or evidence of recovery from Covid. But strict testing rules remain for all travellers coming from ‘virus variant’ regions.

Merkel has been pushing for nationwide EU restrictions on people arriving from Britain due to the Delta spread there.