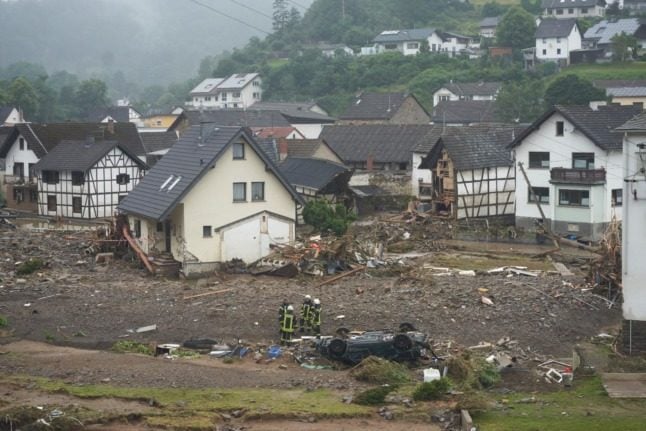 Hundreds of people are still unaccounted for in Ahrweiler. Emergeny responders are seen here in the community of Bad Neuenahr-Ahrweiler. Photo: picture alliance/dpa | Thomas Frey

This is a developing situation – we are updating this story regularly

“According to current information, 90 people lost their lives during the disaster” in the Rhineland-Palatinate region, one of the worst hit, police in the city of Koblenz said in a statement. A further 43 people have died in the neighbouring North Rhine-Westphalia, and 20 in Belgium.

In western German regions, streets and houses were submerged by water in some areas, while cars were left overturned on soaked streets after flood waters passed. Some districts were completely cut off from the outside world.

“Everything was under water within 15 minutes,” Agron Berischa, a 21-year-old decorator from Bad Neuenahr in Rhineland-Palatinate state, told AFP.

“Our flat, our office, our neighbours’ houses, everywhere was under water.”

In nearby Schuld, Hans-Dieter Vrancken, 65, said “caravans, cars were washed away, trees were uprooted, houses were knocked down”.

“We have lived here in Schuld for over 20 years and we have never experienced anything like it. It’s like a warzone,” he said.

Roger Lewentz, interior minister for Rheinland-Palatinate, told Bild the death toll was likely to rise as emergency services continued to search the affected areas over the coming days.

“When emptying cellars or pumping out cellars, we keep coming across people who have lost their lives in these floods,” he said.

Shocking images of the flooding in parts of Germany

This is #Ahrweiler in Rhineland Palatinate (video via @NicosPanoptikum) pic.twitter.com/hYnK2wAdmf

Adding to the devastation, several more people were feared dead in a landslide in commuter town south of Cologne on Friday, triggered by floods.

As of Friday evening, three residential buildings and part of the historic castle in Erftstadt-Blessem had collapsed. It was unclear how many victims were affected. The district administrator in charge, Frank Rock, said on N-TV that 50 people had been rescued by boats.

“I fear that we will only see the full extent of the disaster in the coming days,” Chancellor Angela Merkel said from Washington, where she met with President Joe Biden.

Catching residents of several regions unaware and leaving destruction and despair in their wake, the masses of water were dubbed the “flood of death” by German newspaper Bild.

🇩🇪 Ahrweiler: Day 2. Tragedy all around but also absolute determination from people in this town to roll up their sleeves and rebuild their lives. #Hochwasserkatastrophe pic.twitter.com/mHuwMQHLBj

Neighbouring Belgium is also badly hit, while Luxembourg and the Netherlands were also severely affected by the torrents of water, with thousands evacuated in the city of Maastricht.

In Germany’s devastated Ahrweiler district of Rhineland-Palatinate around 1,300 people were unaccounted for on Friday, although local authorities told Bild the high number was likely down to damaged phone networks.

Regional interior minister Lewentz had told broadcaster SWR earlier on Friday that “we believe there are still 40, 50 or 60 people missing, and when you haven’t heard for people for such a long time… you have to fear the worst”.

“The number of victims will likely keep rising in the coming days,” he added.

Around 1,000 soldiers have been deployed to help with rescue operations and rubble-clearing in affected towns and villages.

Streets and houses under water, overturned cars and uprooted trees could be seen everywhere the floodwaters had passed, while some districts were cut off from the outside world.

In Ahrweiler several houses collapsed completely, leaving the impression the town had been struck by a tsunami.

At least 24 people had been confirmed dead in Euskirchen, one of the worst-hit towns just to the north.

Its normally spick and span centre had been turned into a heap of rubble, with house facades torn off by the rushing floods.

Adding to the town’s woes, a nearby dam remains at risk of giving way.

A total of 23 towns and districts are affected by flooding in NRW, according to the Federal Office for Population and Disaster Control in Bonn.

In some places, the water is slowly receding – but as people are still missing, it’s feared the death toll will rise.

Across western Germany, around 102,000 people were still without power on Friday afternoon. The storm and the resulting flooding continued to cause outages in the power supply, the energy supplier Westenergie said.

“My empathy and my heart go out to all of those who in this catastrophe lost their loved ones, or who are still worrying about the fate of people still missing,” Merkel told reporters in Washington.

She said her government would not leave those affected “alone with their suffering,” adding that it was doing its “utmost to help them in their distress”.

Some parts of western Europe received up to two months’ worth of rainfall in two days on soil that was already near saturation, according to the World Meteorological Organization.

“This is a unique catastrophe of unprecedented scale,” said Gerd Landsberg, chief executive of the German Association of Towns and Municipalities, assessing the flood disaster.

“It must now be a matter of helping people, some of whom have lost everything, but also the affected municipalities, whose infrastructure has been destroyed, quickly and unbureaucratically.”

Landsberg said the cost of the damage was likely to run into “billions of euros”.

Winfied Köller, a resident of the city of Hagen in NRW, told public broadcaster WDR he had “never experienced anything like this in my life” after being rescued from his car by firefighters.

Also in Hagen, Sebastian Kiefer was helping to fill sandbags in front of a local restaurant. “It’s crazy when you think about the power behind the water,” he told WDR.

Konstantin Hartmann, from the village of Roetgen-Mulartshuette in the Eifel region, told the broadcaster his barn had been completely destroyed. “It’s all ruined in there. Nobody helped us, nobody.”

In Belgium, the army has been sent to four of the country’s 10 provinces to help with rescue and evacuations.

In Baden-Württemberg, severe weather and flooding also caused problems for people. In some regions, roads were closed, and in the Allgäu region, there was flooding. The German Weather Service (DWD) warned of heavy rain and thunderstorms in Upper Swabia.

The State Office for the Environment of Rhineland-Palatinate reported a low risk of flooding for almost the entire state by Saturday morning. In the region around Altenahr and in parts of the Eifel, however, isolated flooding was still possible.

In North Rhine-Westphalia, falling water levels are expected. However, the water levels were still above the warning thresholds, according to the State Environment Agency.

Train traffic in NRW and Rhineland-Palatinate is still severely affected. According to Deutsche Bahn, numerous lines are completely closed or have only limited traffic.

The storms have put climate change back at the centre of Germany’s election campaign ahead of a September 26 parliamentary poll marking the end of Merkel’s 16 years in power.

Speaking in Berlin, President Frank-Walter Steinmeier said Germany would “only be able to curb extreme weather situations if we engage in a determined fight against climate change”.

Germany “must prepare much better” in future, Interior Minister Horst Seehofer said, adding that “this extreme weather is a consequence of climate
change”.

Because a warmer atmosphere holds more water, climate change increases the risk and intensity of flooding from extreme rainfall.

In urban areas with poor drainage and buildings located in flood zones, the damage can be severe.

Political candidates were quick to open a bidding war on climate following the floods.