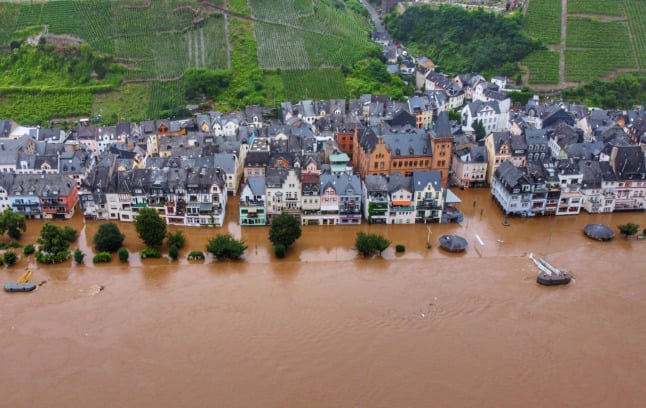 What are climate experts saying about this?

Much like the deadly heatwave in Canada in recent weeks and lightning storms across Germany, the shocking flash floods that have hit western Germany this week – particularly on Wednesday and Thursday – can be traced directly to climate change.

As it stands, the earth has heated up by 1.2C since pre-industrial times – and this additional warmth in the atmosphere is already having an effect on our natural environment and weather events.

According to Stefan Rahmstorf of the Potsdam Institute for Climate Change Research, warmer air is able to hold much more water than cooler air, so as the climate gets hotter, it also becomes more humid.

With so much moisture in the air, it not only rains harder, but also for longer: in the worst-hit parts of of Rhineland-Palatinate and North Rhine-Westphalia, almost 150 litres of rain fell per square-metre over 48 hours.

Also to blame is the low-pressure area that sits above Germany, cutting across the country from Saxony, Thuringia and northern Bavaria through parts of Hesse to the western regions of Germany.

“Like a sort of rotary worm, it brings repeated heavy rain,” explained meteorologist Sven Plöger in an interview with Tagesspiegel.

While a great deal of attention has been paid to the extreme heat and forest fires in North America and Canada in recent weeks, the shocking scenes of destruction across western Germany – as well as Luxemburg and Belgium – have ensured that the impact of climate change in Europe is now firmly in focus.

“The US is often in the spotlight, but we have also seen extraordinary heat events in northern Europe and Siberia,” Daniel Swain, a climate scientist at the University of California in Los Angeles, told the Guardian. “This is not a localised freak event, it is definitely part of a coherent global pattern.”

Does that mean more floods in the future?

“Definitely,” says Plöger. “We are already experiencing this in a world that is 1C warmer.

“At 1.5C or 2C higher average temperatures there is always more energy in the atmosphere. That means not only more heavy rain, but also almost unbelievable peaks of heat like recently in northern Scandinavia with well over 30C or like during the heat waves in Germany in summer 2019.”

While climate activists are keen to see global warming capped at 1.5C – which is also the target set by the Paris Agreement – current trends suggest that we’ll cross that threshold sometime between 2030 and 2050. Over the coming decades, climate experts believe we will live in “a world of extremes”, with both harsh droughts and catastrophic floods. Photo: picture alliance/dpa | Karl-Josef Hildenbrand

According to Plöger, on the basis of mankind’s current actions, we’re setting a course for 2.9C heating by 2050 – with the potential to go up to 4C by the end of the century. “That would be a completely different world than we have today,” he said.

“It was four degrees colder thousands of years ago – back then, entire countries were covered by ice. If we create an atmosphere four degrees warmer in 100 years, it will be a world of extremes.”

As news broke of the tragedy unfolding in North Rhine-Westphalia and Rhineland-Palatinate on Thursday, it didn’t take long for politicians to place the regional catastrophe in the context of global climate change.

Armin Laschet, the conservative running to succeed Angela Merkel in the election on September 26th, called for an acceleration of efforts to fight climate change, underlining the link between global warming and extreme weather.

He is the state premier of North Rhine-Westphalia, one of the two worst-hit states along with neighbouring Rhineland-Palatinate.

German President Frank-Walter Steinmeier on Friday urged a more “determined” battle against global warming in light of the severe flooding.

“We will only be able to curb extreme weather situations if we engage in a determined fight against climate change,” Steinmeier said in Berlin, as the German toll from severe flooding reached 103.

Writing on Twitter on Wednesday, Verena Schäffer, the head of the North Rhine-Westphalia fraction of the Greens, reported that it had been raining for hours without any interruption.

“The regularity of these intense rain tells us that climate change has long since begun,” she wrote. “We have to do everything we can to limit global warming.”

In the wake of the flash floods and devastating loss of life on Thursday, however, politicians have been trying to avoid accusations of politicising the disaster. Several parties have put their election campaigns on hold out of respect for the victims of the floods.

How have other people responded?

As photos emerged of Armin Laschet in wellies and a mac at the scene of the floods, commentators were quick to point out the apparent gulf between his call for “speedy” action on climate change and his policies.

“Energy transition, yes, but not without fixed-distance rules for wind turbines in North Rhine-Westphalia – with which Laschet’s state government, not without irony, has in fact created a competitive disadvantage for future industry.”

Laschet also faced a social media furore after giving a car-crash interview with WRD in which he was grilled on his environmental record and forgot his interviewer’s name several times, instead referring to her as “Junge Frau” (young lady).

Shortly afterwards, the hashtag #jungefrau was trending on Twitter as people rushed to his perceived sexism and seeming ambivalence towards the threat of climate change.

“One doesn’t change one’s politics because of a day like this,” he was quoted as saying.

“And we put 50 billion euros into fossil fuels every year. And we are content with CO2 taxes that don’t work.

“The #climate crisis has been here for a long-term worldwide. Let’s finally fight it.”