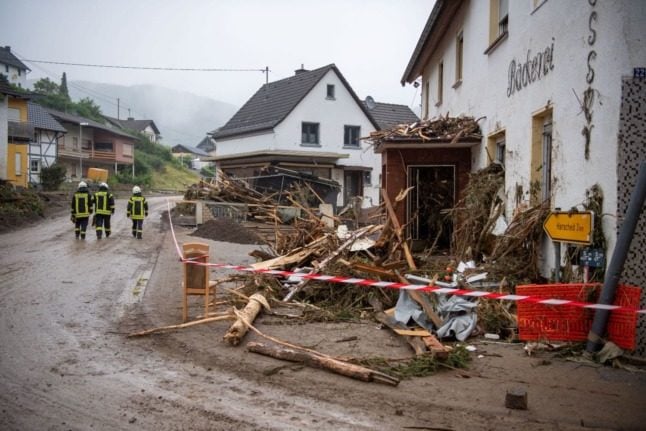 The village of Schuld has been virtually destroyed. Photo: picture alliance/dpa | Lino Mirgeler

Towns and villages in western regions of Germany have been destroyed after torrential rain caused flooding and rivers to burst their banks.

German emergency workers are continuing to search for missing people in the worst-affected regions in Rhineland-Palatinate and North Rhine-Westphalia (NRW).

With more than 100 people confirmed to have died – and the death toll rising – the scale of the flooding disaster is unusual for European countries. We examined how the catastrophe unfolded and why there could be so many casualties.

Keep in mind that this is a developing situation and things may change.

LATEST: More than 100 dead after flooding disaster in western Germany

How did it unfold?

Torrential downpours began in parts of Germany on Tuesday, resulting in flash floods. Firefighters were already pumping out water from basements across Rhineland-Palatinate and North Rhine-Westphalia (NRW) at this time.

The German Weather Service had issued its most severe weather warning possible between Eifel and the Mosel Valley in NRW and Rhineland-Palatinate due to the extremely heavy continuous rain.

But no one expected the situation to deteriorate the way it did. Some parts of western Europe received up to two months’ worth of rainfall in two days on soil that was already near saturation, according to the World Meteorological Organization.

The heavy rain on Wednesday night caused more flooding and rivers to break their banks.

Houses, cars and infrastructure became submerged in water and destroyed. Six houses collapsed in Schuld, Rhineland-Palatinate, a village with 700 people.

Desperate residents sought refuge on the roofs of their homes as rescue helicopters circled above.

Residents said the sheer force of the water was unstoppable, meaning that people had very little time to try and get to safety.

When the water came, Schuld resident Peter Ohlert put documents and essentials in a box on Wednesday night, got into the car and drove up the slope.

“I only had 20 minutes, it went that fast,” he told Editorial Network Germany. The whole night he watched helplessly from a safe height.

Now his house is almost destroyed – the water has pushed out the windows, with muddy curtains left hanging. But people are just thankful to be alive.

Sebastian Heinrich, deputy fire chief of Schuld, who was on duty on Wednesday night and Thursday said: “That was sheer horror. It’s not something you ever want to experience.”

“Everything was under water within 15 minutes,” Agron Berischa, a 21-year-old decorator from Bad Neuenahr in Rhineland-Palatinate state, told AFP.

“Our flat, our office, our neighbours’ houses, everywhere was under water.”

In North Rhine-Westphalia, the speed of the floods also took people by surprise.

In Schuld, Hans-Dieter Vrancken, 65, told AFP “caravans, cars were washed away, trees were uprooted, houses were knocked down”.

“We have lived here in Schuld for over 20 years and we have never experienced anything like it. It’s like a warzone,” he said.

Sebastian Kiefer in Hagen, NRW, told broadcaster WDR: “It’s madness when you think about the force behind the water and everything it washed away.”

The floods have resulted in more than 100 people losing their lives.

Several bodies were found in basements during rescue operations.

WDR said that people often go to the basement when there’s flooding to see if they can protect their home by keeping the water out using buckets, or to rescue some of their belongings. However, the deluge of water means that is extremely dangerous.

Roger Lewentz, interior minister for Rheinland-Palatinate, told German newspaper Bild the death toll was likely to rise as emergency services continued to search the affected areas over the coming days.

“When emptying cellars or pumping out cellars, we keep coming across people who have lost their lives in these floods,” he said.

Emergency workers have been struggling to save people in shaky buildings over the last days. At least two firefighters are reported to have died while working in the towns of Altena and Werdohl in NRW.

“I’m actually still at a loss for words,” a woman in Lasbeck in the Sauerland region told WDR, where she described masses of water coming down a road at high speed.

“It’s a shock for everyone.” It’s “all still very unreal,” she said.

In Iserlohn, a woman told WDR on Wednesday that dozens of people had to leave their homes on Wednesday night and were given shelter in a gymnasium.

“Some of them left their pets upstairs (in their homes) inside, because we did not know how long we would be there”, she said, adding that people were crying.

Why was there so much rain – and why were areas not prepared for the situation?

Meteorologist Sven Plöger, told Tagesspiegel the heavy rain was caused by a low-pressure area that has been moving over Germany.

He said extreme rainfall has a massive impact on areas in different ways.

“The heavier it rains, the more difficult it is for small streams, rivers or the sewage systems to drain off the water,” he said. “It becomes especially dangerous when there are narrow places due to a valley or construction sites and the water has to flow through there.

“This is when the Bernoulli or jet effect kicks in, which in simple terms means “the narrower the faster”. This then leads to torrential and destructive floods of water.

“Especially in mountainous regions such as the Eifel, the water mass is also accelerated by the slope and mudslides can also be triggered. In the lowlands, on the other hand, larger areas flood for a long time, making them unusable and a source of danger.”

The scale of the emergency has even shocked scientists.

Dieter Gerten, professor of global change climatology and hydrology at the Potsdam Institute for Climate Impact Research, told The Guardian that he grew up in a village in the affected area. He said it occasionally flooded, but not like this.

“This week’s event is totally untypical for that region,” he said.

Although many municipalities have been evacuated, should this have happened sooner? Are areas simply not equipped to deal with the flooding? What else could have been done to save lives?

These questions will need to be addressed by German authorities in the coming days as the country comes to terms with the scale of the disaster.

Is climate change to blame?

Experts say the disaster is linked to climate change. This issue is back at the centre of Germany’s election campaign ahead of the federal election on September 26th.

Germany “must prepare much better” in future, Interior Minister Horst Seehofer said, adding that “this extreme weather is a consequence of climate change”.

Scientists say that because a warmer atmosphere holds more water, climate change increases the risk and intensity of flooding from extreme rainfall.

In urban areas with poor drainage and buildings located in flood zones, the damage can be severe.

This morning I went to Euskirchen, in one of the districts worst affected by the German floods. The town had 54 hrs of continuous rainfall, leading to a 6ft torrent of mud that swept downhill through its centre. These pictures give some impression of its sheer force. pic.twitter.com/T1CBloas1R

Deputy Chancellor Olaf Scholz (SPD) said: “This is a natural disaster but the fact it’s taken place in this way is certainly connected to the fact climate change is progressing at a speed we’ve observed for a while.

“That must be another incentive and also an obligation for those who’ve become victims here for us to avoid man made climate change and prevent such disasters at this scale.”

Rhineland-Palatinate’s state premier Malu Dreyer (SPD) said: “Anyone who has not yet understood that climate change has its consequences is beyond help.”

Speaking in Berlin on Friday, President Frank-Walter Steinmeier said Germany would “only be able to curb extreme weather situations if we engage in a determined fight against climate change”.

How are people being supported?

The federal and state governments have pledged to do whatever it takes to assist people and rebuild after the destruction.

German Chancellor Angela Merkel promised aid to those affected, and the North Rhine-Westphalia state cabinet was set to discuss the matter in a special session this Friday.

Rhineland-Palatinate has already made €50 million available as short-term support to repair damage to roads, bridges and other structures. In the flooded areas, clean-up and recovery operations continued on Friday.

Minister of the Interior, Horst Seehofer (CSU) and Minister for Agriculture Julia Klöckner (CDU) have both said that those who have lost their belongings in the flood will be given financial aid quickly and unbureaucratically.

“These are great tragedies, they can hardly be put into words,” explained Klöckner, who is also the CDU chairwoman for Rhineland-Palatinate. “The federal government will be at the side of those affected with all the means at its disposal.”