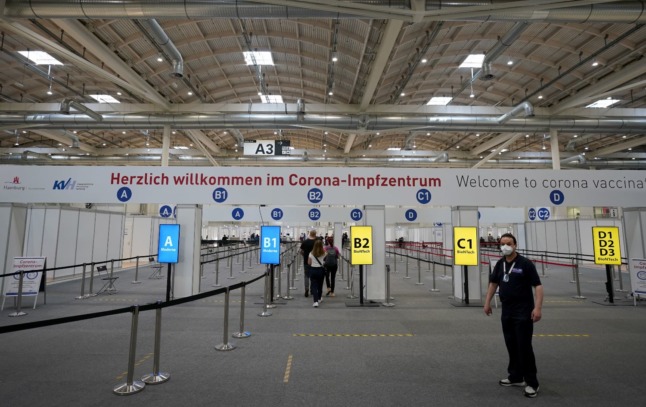 The number of daily vaccinations being carried out in Germany is going down. But experts say the country is in a race against time to inoculate before the more transmissible Delta variant of Covid-19 pushes up the number of cases.

Now there’s a debate on how to vaccinate people who haven’t yet come forward for their jab.

She said people in Germany should be able to get a shot in places like pedestrian zones, housing estates or events.

The doctors’ union Marburger Bund has a similar view. “A little more creativity is needed on the part of the local authorities,” chairwoman Susanne Johna said in an interview with the Rheinische Post.

“We also have to address people directly and not wait until they come to the vaccination centre or the family doctor. The lower the threshold, the better. The crucial thing is that we now also reach all those who – for whatever reason – have been hesitant so far or need to be convinced.”

‘Raffle or prize should be offered’

“One could think of a raffle in which, for example, a bicycle, a foreign language course or another nice prize is given out among those willing to be vaccinated,” the CDU politician said in an interview with Funke Media Group newspapers. Mobile vaccination teams and special campaigns are especially necessary in socially disadvantaged areas, he added.

In the past two weeks, the number of vaccinations per day in Germany has decreased significantly.

According to figures from the Robert Koch Institute (RKI), 699,500 vaccine doses were administered on Tuesday this week, compared to 917,000 the previous week – and more than one million doses on each of the Tuesdays of the previous three weeks.

READ ALSO: Low income workers in Germany ‘ left behind’ in the vaccination rollout

The EU Health Commissioner Stella Kyriakides called for an acceleration of the vaccination campaign. She said the EU would reach its goal of having enough vaccines for 70 percent of adults by the end of July. But because virus variants have “increased transmissibility”, “more than 70 percent (of adults being vaccinated) is needed to be safe”.

The latest data shows 57.1 percent of the German population has received at least one dose, and 39.9 percent are fully jabbed.

How much is the Delta strain spreading in Germany?

The concern over vaccination protection is huge because the Delta variant, which first appeared in India, is spreading rapidly.

As we’ve seen in the UK and other countries like Israel, Covid infections can increase dramatically even if a large proportion of the population is inoculated. Countries that do not have high vaccination coverage, like Australia, are also battling the Delta variant of Covid.

And new data shows Delta is the dominant strain for the first time in Germany. It accounts for 59 percent of new cases, the latest evaluation from the RKI shows. The data covers the previous week of June 21st- 27th.

However, only a share of the positive Covid-19 samples are examined for variants – so Delta could account for many more cases. Furthermore, there is the risk of under-reporting of cases: according to a study by the University Medical Centre Mainz, more than 40 percent of all infected people are unaware of their infection.

On Thursday, Germany logged 970 cases within 24 hours, and 31 deaths. The infection rate rose slightly to 5.2 cases per 100,000 people within seven days. There are fears that the downward trend we’ve seen recently is stagnating – and that the infection rate could rise further again soon.