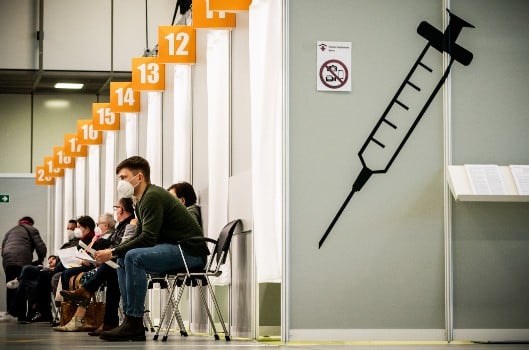 Politicians from the governing SPD and CDU/CSU parties have called for fines for people who fail to attend their Covid vaccination appointments.

“It would be right if there were a penalty for those who don’t even cancel their appointment,” SPD health expert Karl Lauterbach told the Bild am Sonntag.

No shows at vaccine centres mean “that we vaccinate slower than we could and that we have to throw away doses,” Lauterbach said.

Lauterbach, who is a trained doctor, said that he knows the problem first hand from his work at the Leverkusen vaccination centre.

Frei said that not turning up to an appointment was inconsiderate and a slap in the face of all those who were still waiting for an appointment.

“Anyone who is too selfish to pick up the phone or cancel an appointment with just a few clicks should have to pay for the cancellation costs incurred,” he said.

Head of the Berlin Red Cross (DRK), Mario Czaja, initiated the debate and proposed fines of €25 to €30 euros. He says that five to ten percent of appointments are now not being kept at Berlin’s vaccination centres.

A variety of factors are suspected to explain why people don’t turn up for an appointment.

Some people are likely to be on vacation, others may no longer consider the risk of an infection to be so high, or others have in the meantime received an appointment with a company doctor or in a GP’s practice.

Opposition politicians and some doctors’ representatives said that incentives rather than punishments were the better option.

Health spokeswoman for the liberal FDP, Christine Aschenberg-Dugnus, said that fines could deter people from getting a jab against the disease.

“Better would be more mobile vaccination teams, which educate and vaccinate people close to their homes. Vaccination incentives could also help,” she said.

After months of shortages of vaccine doses, supply now outweighs demand, the government said recently. Germany therefore believes it will be able to vaccinate everyone who wants a vaccination by the end of July.