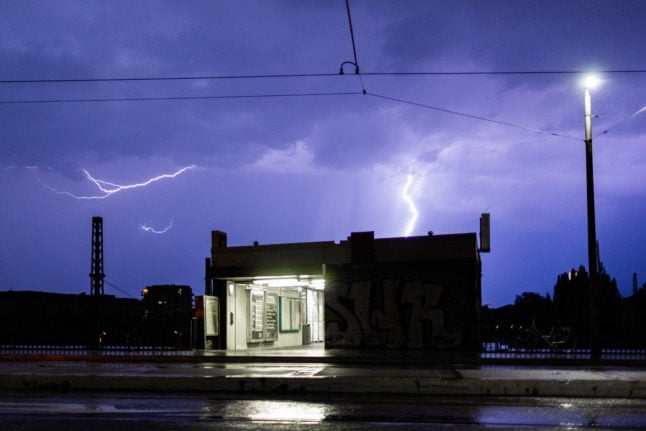 Over the past few days, the scorching heatwave in the small town of Lytton, in the west of Canada, has forced meteorologists to repeatedly adjust their scales.

First, temperatures soared to around 46C, breaking all known records. Then, it went up again by a further degree – another record. And then again. By Wednesday, the small weather point in the village near Vancouver was recording deadly temperatures of almost 50C.

And then on Friday morning, a forest fire spread rapidly into the village before there was time to issue a warning.

“Our poor little town of Lytton is gone,” one of the residents wrote on Facebook.

Lytton is – or was – on the same latitude at Frankfurt am Main. The record temperatures are not isolated to Canada – they reflect a trend across the globe. Every part of the earth is getting hotter, and countries in the northern hemisphere are clearly not immune to its effects.

So, what’s going on in Germany?

At the same time that blistering heat was afflicting Lytton, violent storms were sweeping across Germany.

Over the past week, in the southern and western parts of the country have been blighted by torrential rain, flash floods, and thunderstorms.

In the historic city of Stuttgart in Baden-Württenburg, part of the roof of the State Opera was torn off by the gales and landed in the grounds on Monday night during a recital.

Meanwhile, in Bavaria’s medieval town of Landshut, streets were transformed into rivers as the Isar broke its banks, while Hesse and North-Rhine Westphalia also saw floods, fallen trees and landslides.

In the north and east, meanwhile, torrential rain, thunder and lightning struck over the past few days as the storms moved up over the country, leading to fears of widespread flooding.

Are these storms part of a wider trend?

Extreme weather events like this – with blistering heat followed by raging storms – are fast becoming the new normal in Germany. So much so that the head of the German Weather Service (DWD) gave an interview to the Frankfurter Allgemeine this week to offer advice to citizens on how to keep themselves safe in future lightning storms.

According to the DWD’s end-of-month report, this June was the third hottest on record.

While the south was affected by unusually wet temperatures, northern parts of Germany experienced arid dryness, drought, and the threat of forest fires.

Towards the middle of the month, the population sweated amid a sweltering heatwave that reached 38C, which lasted several days.

The violent storms, meanwhile, were caused by collisions between high air-pressure zones in Central Europe which “had to give way to areas of low-pressure that were rapidly approaching”, DWD reported.

How is this related to climate change?

“Weather conditions that previously gave us tolerable summer temperatures or a longed-for rain shower are changing,” PIK researcher Peter Hoffman told the Rheinische Post on Thursday. “And we feel that in the increasing intensity and duration of heat waves and heavy rain days.”

While there used to be an average heat wave of four days per summer in Germany, today there are on average two four-day heat waves and in extreme summers such as 2018 and 2019 even three or more, said Hoffmann.

“This development will very likely continue in the coming decades, but can be limited in the long term by far-reaching climate protection measures,” he added. Writing on Facebook, Green Party politician and biologist Anton Hofreiter explained that the recent storms were caused by changes in the flow of the jet stream – strong, fast-flowing winds that blow from east to west – that are directly linked to climate change.

“The jet stream used to be very steady and reliable because it was embedded between the cold air over the Arctic and the warm air of the subtropics – but the climate crisis is causing the atmosphere to warm up,” he wrote.

“However, this does not happen evenly, because the atmosphere over the Arctic warms up significantly more than over the subtropics. The result is that the jet stream begins to make waves. If it hits a wave to the north, warm air can flow unhindered to the north and it gets warmer and warmer.

“The reverse is also true: if it hits a wave to the south, cool air flows from the north to the south and there is above-average cool weather.

“That means: in the temperate zone – where North America and Europe are located – the weather becomes much more extreme.”

What other impacts of climate change are we seeing in Germany?

According to the German Ministry for Environment, Natural Protection and Nuclear Safety (BMU), “The consequences of global warming are becoming more noticeable in Germany and can be better and better documented.”

According to statistics released in 2019, Germany has seen the number of super-hot days – defined as temperatures of 30C of more – rise drastically over the past 70 years, from three-per-year on average in 1951 to 20-per-year in 2018.

Meanwhile, over the same period the sea level has risen by around 9cm, while the median air temperature has spiked by 1.5C.

Groundwater levels – considered our most important source of drinking water – have also sunk dramatically over this time, leading to fears of ever-worsening droughts in the country over the next few centuries.

In Germany 2050: How Climate Change Will Change Our Lives, journalists Toralf Staud and Nick Reimer analyse the impact of further climate change on the country over the next thirty years.

The terrifying verdict is that temperatures topping 40C could be a regular occurrence, along with droughts, sweltering nights and tropical mosquitoes. This wouldn’t only affect major cities like Berlin and Frankfurt, the authors say, but also smaller rural communities, towns and villages.

What role will climate change play in the upcoming elections?

Climate change is expected to be a major battleground topic in Germany’s upcoming elections in September, with all parties striving to show off their environmental credentials to voters.

So far in the campaign, Germany’s Greens have faced off against the incumbent Christian Democratic Union (CDU) and Christian Social Union (CSU) party, with the Greens accusing the CDU of not going far enough in its proposed climate protection measures.

Speaking to the Rheinische Post on Thursday, climate protection activist Luisa Neubauer called on political decision-makers to take “courageous measures” in the fight against climate change.

“People and cities are not built for these climate catastrophes, the suffering is unbearable,” Neubauer said.

With three months to go until the election, “now would be the moment to show that [the parties] intend to get the crisis under control,” she added.

Experts agree that much more has to be done around the world by 2030 if global warming is to remain well below two degrees, as agreed in 2015 by almost 200 countries as part of the Paris Climate Accord.

Since pre-industrial times, the temperature of the earth has risen by around 1.2C, leading experts to warn of irreversible effects on our planet if drastic action isn’t taken soon.