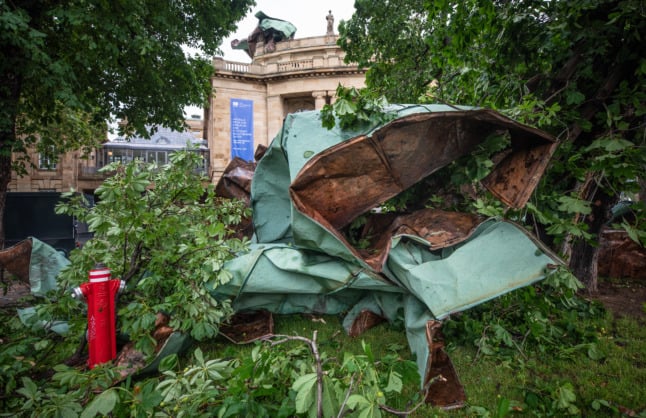 Violent thunderstorms with sharp gusts and heavy rain hit people in the southern and western regions of Germany on Monday night.

In Stuttgart, the fire brigade received more than 330 calls between Monday evening and Tuesday morning, partly due to the intense downpour that caused several of the city’s tunnels to flood. Parts of the cladding flew off the roof at the city’s State Opera, where 250 guests were attending a recital on Monday night. According to DPA, statues also fell from their pedestals – but nobody at the recital was injured.

“I’m under the roof and getting pretty wet,” director Viktor Schoner told the DPA on Monday evening. The side stage was under water, while some of the rain poured into the building through the lamps. In the district of Calw, fire brigade and police forces were occupied throughout the night with the fall-out from the thunderstorm. A spokesman for the Pforzheim police told the DPA that they had dealt with flooded streets, overflowing gullies and landslides in the Altensteig region. Some severe storms also hit Rhineland-Palatinate and parts of Hesse. The fire brigade announced on Tuesday morning that there had been 265 calls in the Vorderpfalz area due to the heavy rains. In the city of Ludwigshafen, water was pumped from basements and apartments, and fallen trees were removed. On two motorways in Rhineland-Palatinate there were accidents with injuries during heavy rains. On the A3 and the A48 there were a total of seven accidents in the late afternoon in the area of ​​the Montabaur motorway police, police announced. In Bavaria, too, the storm raged late on Tuesday evening until late into the night. Within a very short time there were 101 fire brigade and 25 rescue service operations, the city of Würzburg announced.

The forces removed fallen trees, secured flying parts, pumped out basements that had been filled with water and secured flooded roads.

The fire brigade also faced a busy night in the west. In Bocholt in North Rhine-Westphalia the emergency services were called more than 100 times during the night.

Numerous cellars had to be pumped out and trees had to be cleared from streets. A spokeswoman for the German Weather Service (DWD) said on Tuesday morning that there was no end to the storm in sight. Although the current storm that formed over Baden-Württemberg and Bavaria has now partially moved to the Czech Republic, the weather situation remains complex.

For Tuesday afternoon, the DWD expects “new, sometimes strong, thunderstorms with a local risk of severe weather, especially from heavy rain” in the north and later in the east.