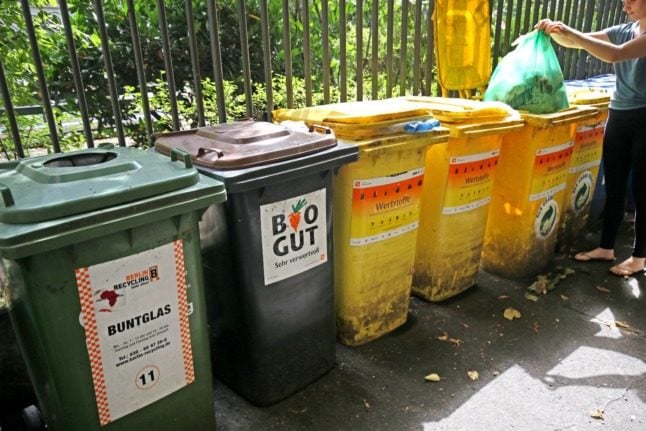 In my first month in Germany, I received an unusual call on my doorbell intercom.

Not expecting visitors, I answered it with some uncertainty.

An unknown man spoke on the other side and asked me if I understood German. Good, I was back on steady ground: with no small amount of pride, I replied with an enthusiastic “Ja!”. Then came the charming answer:

“So why the hell can’t you understand how to recycle properly then?”

This was my very friendly neighbour’s way of introducing me to a uniquely German phenomenon: aggressive recycling.

READ ALSO: Five ways living in Germany makes you greener (without even realising it)

Recycling in Germany can be, to put it lightly, completely and utterly confusing. What goes into a “Wertstofftonne”? Why can’t I recycle glass at home? And what, for the love of God, does a Pfand have to do with it?

While there are still some questions about where recycled rubbish goes, most Germans care a lot about their environmental impact and are vigilant recyclers.

Whether you’re environmentally-minded, or just want to avoid your neighbours’ wrath (not to mention, that of the German government, who hand out hefty fines for bad recycling), it’s worth knowing what’s what in the recycling world.

Note that this is a general guide and some German regions have differing rules.

The bin known as “Gelbe Tonne”, “Gelber Sack” or “Werstofftonne” (yellow bin, yellow bag, or recycling bin) is for all things recyclable except for paper and glass. This is where you’ll put most of your plastic, styrofoam, and aluminium packaging, tins, juice and milk cartons, yoghurt pots and plastic bottles without a Pfand.

If you’re not sure whether something can be recycled, check for a recycling symbol on the packaging.

Note that things like plastic film and cling film usually can’t be recycled, though some cities will make an exception. It’s also best to wash out food containers like tins and cartons before disposing of them.

Most apartment blocks have a “Papiertonne” or “grüne Tonne” (green container) in the communal rubbish area.

If you don’t have one, or live in a house, you may need to take your paper waste to the nearest recycling bin. These can be found everywhere in cities and towns, or at drive-to recycling points in the countryside.

As the name suggests, all things paper and cardboard belong in this container. However: if the paper is stained with grease or food, it should go into general waste rather than the recycling bin.

Glass is one of the more complicated materials to recycle.

Many houses and apartment blocks don’t have their own glass bins. So, you’ll need to do some wandering or Googling to figure out where your nearest “Altglascontainer” is. Some areas have maps online to help you, like this one for Berlin, or this one for Hamburg.

READ ALSO: Is Germany the green leader it’s hyped up to be?

Before you clank a week’s worth of bottles to your recycling point, however, make sure to check them first. Most smaller bottles like those for soft drinks and beer usually have a “Pfand” – which we’ll cover later on.

These shouldn’t be thrown into the big containers.

There are three types of glass recycling. For all of them, the following rules apply:

Recyclable glass needs to be split by colour: green, white (clear), or brown. Any colourful glass that doesn’t fit into those three categories goes into the green container.

These are bottles that can be washed and re-filled and brought back onto the market. You’ll usually find the words “Mehrwegflasche”, “Leihflasche” or “Pfandflasche” on the label or the bottle itself – this basically just means “reusable bottle”. The Mehrwegflaschenpfand is an optional recycling system. You can return the bottles to the shop you bought them from and claim back a small “deposit” (that’s what “Pfand” means in this context) that you pay with the price of the drink when you buy it.

Germans tend to follow the saying “Pfand gehört daneben” when they’re out and about. This means: if you don’t have the time or energy to collect your Pfand, leave them next to public bins.

This is so that someone else can collect it, rather than the bottle going into general waste. While it might seem strange or even privileged, many homeless people rely on the change they can get through handing in Pfand bottles to survive.

Of course, it would be better if they didn’t have to do this at all, but for now it’s worth knowing: it’s seen as inconsiderate to throw your Mehrwegspfand bottles in the trash!

There is also such a thing as “Einwegflaschen” or “single use bottles”. These are generally plastic bottles that can’t be refilled, but can be melted down and reshaped into new bottles.

You can take these to the shop you bought them from to reclaim your Pfand, or you can take them to Pfand-machines. Almost every supermarket has one standing by the entrance.

These work by feeding the bottles into the machine. You then receive a “Pfand-token” which you can use for your grocery shop, or you can ask for it in coins from the cashier.

Did you know that tin cans also have “Einwegpfand”? You can hand them in at any large supermarket (over 200 square metres) for 25 cents each!

“Biomüll” – anything that’s biodegradable, from food waste to reasonable amounts of gardening waste – belongs in the compost bin. These are usually green or brown bins.

If your accommodation or house does not have an organic waste bin, you can request one from the housing management or local council.

You can find out where to dispose of electronic devices near you on this website by typing in your postcode.

If you’re trying to get rid of an old phone, you can also donate it to charities like handys fuer die umwelt or NABU who put usable phone parts of broken or old phones back into circulation or donate them to people around the world.

Batteries and lightbulbs: can be disposed of properly in any shops that sell them. They usually have special containers for this.

These have become the subject of quite a lot of controversy in recent years, as it turns out they usually don’t donate your clothes, but ship them to other countries, where they are sold off, or bought in bulk by second-hand and vintage kilo shop suppliers.

Arguably, this is still better than throwing them into general waste – but the ethical implications can be pretty dire.

Another option is to donate them directly to social projects near you, to friends and family, or to reuse the materials yourself.

Anything else that doesn’t fall into the many categories above goes into “Restmüll” – general waste. This will be things like non-recyclable plastics. These are collected and incinerated at waste plants.

Anything that has hazardous materials in it – paint, chemicals, lightbulbs – does not belong in general waste, and neither does anything recyclable!