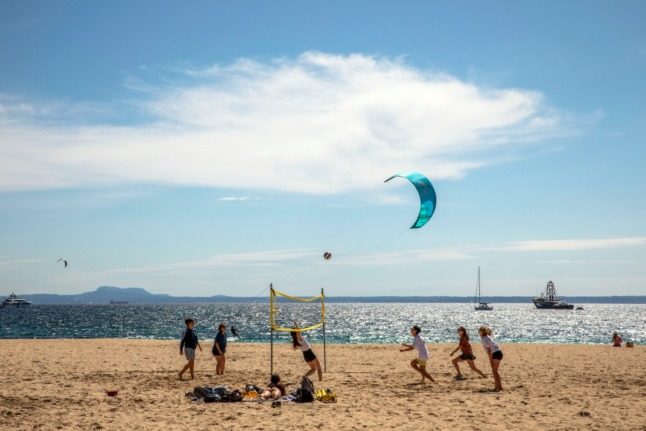 People on a beach in Mallorca in May. Photo: picture alliance/dpa/ZUMA Wire | John-Patrick Morarescu

But they leave out neighbouring France, which is considered an area of “particularly high risk of infection”, meaning unvaccinated travellers would still need to quarantine upon return to Germany.

Health Minister Jens Spahn said relaxing the rules made sense because Germany generally has “a very similar infection situation” to countries classed as risk areas, and it would make travel easier for families this summer.

“This could be a solution for parents who are possibly already vaccinated and want to travel with their (unvaccinated) children,” Spahn told reporters in Berlin.

Until now, people entering Germany from risk areas had to self-isolate upon arrival and wait five days before taking a coronavirus test which, if negative, would end their quarantine.

EXPLAINED: What you need to know about the latest rules on travel to and from Germany

For unvaccinated people, the five-day rule still applies when coming from countries listed in the higher risk category such as France.

But the fully vaccinated, or those who can produce a positive PCR test that is at least 28 days old to show they have recovered from Covid-19, will be exempt from quarantining even when coming from such “high risk” regions.

Stricter entry regulations and mandatory quarantine remain in place however for anyone coming from regions designated as virus variant areas, such as India, South Africa and Brazil.

Negative Covid test must be shown

Anyone travelling to Germany by plane must also still show a negative test before boarding, regardless of which country they are flying in from, Spahn added.

The updated travel guidance comes as Germany has significantly ramped up its vaccination pace, with more than 33 percent of adults having received their first jab so far.

The country is also seeing a drop in new infection numbers after tightening its coronavirus restrictions, with Spahn last week saying Germany’s third Covid wave “appears to have broken”.

Germany added almost 15,000 new coronavirus cases on Wednesday, bringing the total since the start of the pandemic to just over 3.5 million, according to the Robert Koch Institute for infectious diseases.