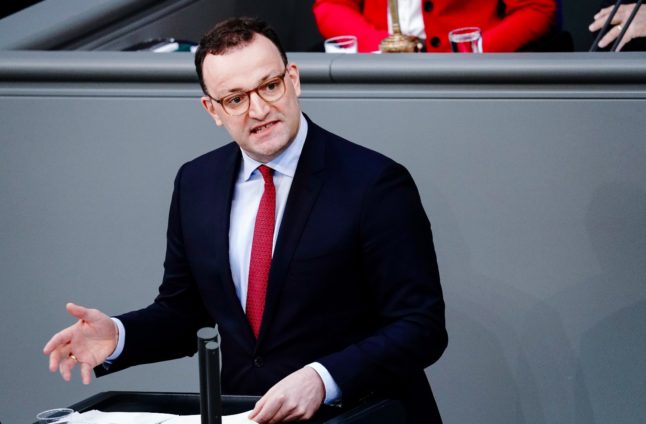 Spahn is hoping “that we will be able to lift the prioritisation in June”, he told the Bundesrat upper house of parliament, referring to current lists deciding who gets the jabs first. He added that the move may be possible even earlier.

READ ALSO: When will I be in line for a Covid vaccine?

After a sluggish start to its vaccination campaign which kicked off in December, Germany has managed to accelerate its rollout this month.

Some 21.6 percent of the population had received a first dose by Thursday, according to official data.

But Germany has until now been bound by a strict system of priority groups drawn up by the STIKO vaccine commission, mostly defined by age.

Some German states had already this week announced plans to open up the AstraZeneca vaccine, which has been on a roller-coaster ride in Europe, to anyone who wants it.

Germany has officially recommended the AstraZeneca jab only for people 60 and older following concerns over several blood clotting cases among younger recipients of the vaccine.

Germany’s Robert Koch Institute (RKI) health agency on Thursday reported 29,518 new infections in the past 24 hours — among the highest daily rates since the start of the pandemic.

READ ALSO: IN NUMBERS: Where are Covid cases going up (and down) around Germany?

The news came as the Saxony state premier said Germany was in talks with Russia to buy 30 million doses of the Sputnik V coronavirus vaccine.

“Germany is negotiating 3 x 10 million doses for June, July, August. The prerequisite for this is the swift EMA approval of the vaccine,” Michael Kretschmer who discussed the issue with President Vladimir Putin, wrote on Twitter.

Kretschmer posted the tweet after meeting Russian Health Minister Mikhail Murashko as part of a visit to Moscow ostensibly focusing on cultural relations with Russia.

As part of the visit, he also discussed joint efforts to fight the virus in a phone call with Putin, the Kremlin said in a statement.

“Putin confirmed the readiness of the Russian side to cooperate with German partners to this end, in particular to organise deliveries and joint production of vaccines,” it said.

Germany sparked controversy in early April when it said it had started talks with Russia about purchasing doses of the Sputnik vaccine without waiting for coordinated EU action.

Health Minister Jens Spahn said Europe’s biggest economy was seeking a “binding commitment on which amounts specifically could reach Germany after regulatory approval and when”.

The negotiations come as the two countries are at loggerheads over issues including repeated Russian cyberattacks against the West, the Kremlin’s treatment of opposition leader Alexei Navalny and escalating tensions on the Ukraine border.

Germany has until now coordinated its vaccine buying with the EU.

Since inoculations began in late December, Germany has deployed vaccines produced by Pfizer-BioNTech, AstraZeneca and Moderna.

A fourth, from Johnson & Johnson, is expected to be rolled out across the bloc in the coming weeks.

The southern state of Bavaria and the eastern state of Mecklenburg-Western Pomerania have already announced plans to pre-order doses of Sputnik. The EMA has launched a rolling review of the Sputnik jab, which could become the first non-Western coronavirus vaccine approved for use across the 27-nation bloc.