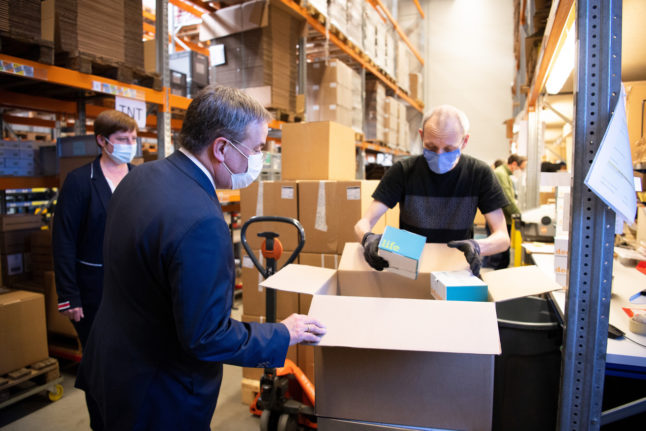 Businesses will be forced to supply self-testing kits to all employees who have to attend their workplace at least once a week. Here’s the latest on the new rules.

Germany’s ruling coalition government has mandated that all employees should be offered free-of-charge self-testing kits at least once a week – with companies footing the bill.

The rules will only apply for companies whose employees are still working on-site during the pandemic, and are intended to reduce the risk of asymptomatic employees infecting their colleagues.

While companies could be fined up to €30,000 for not offering the tests, it will be up to employees to decide whether they want to use them.

A few weeks ago, a study from a Munich-based researcher revealed that the vast majority of German employees were still coming into their place of work, even though experts have estimated that around 56 percent could potentially work from home during the pandemic.

In addition, there have been a number of recent reports suggesting that some companies aren’t putting basic hygiene measures in place for employees, even though Covid-19 infection rates are at a critical point.

READ ALSO: ‘Blindly continuing’: Are too many workers going into the office amid pandemic?

Speaking on the Anne Will talk show last month, Angela Merkel warned that, if firms continued to rule out ‘home office’ working and not offer regular tests, the government would set new regulations to force them to do so. This week, this is exactly what’s happening.

A survey conducted by the Institute for Employment Research (IAB) of 2000 employers found that around 30 percent of businesses had already made plans to introduce in-work testing over the next four weeks.

According to the survey, the majority of large companies (60 percent) planned or started introducing self-tests under their own steam.

Online retailer Amazon, which employs around 1,800 workers in Germany, plans to offer both rapid tests and PCR tests to employees in the near future. “The health and safety of our employees is our first priority,” stated Amazon spokesperson Michael Schneider.

Much of the public has been calling for free in-work tests for a while now, but the move is not without its critics. Speaking to Bavarian radio station BR24, Thomas Schörg of the Schwabian Chamber of Commerce and Industry said that the new rules would make businesses feel that their efforts to fight the pandemic were “little appreciated”.

READ ALSO: Germany pushes for firms to pay for mandatory testing of employees

Unsurprisingly, many businesses are particularly concerned about the costs involved with offering the weekly tests. The government estimates that the move would cost each firm around €130 per employee by the end of June, meaning that a company with 1,000 employees would be forced to shell out €130,000 on tests over the next 10 weeks or so.

Some also doubt that a once-a-week rapid tests – whose results are only valid for around 24 hours – will be sufficient to combat infections in the workplace.

Nevertheless it will likely result in fewer people attending the workplace, if it’s possible for them to do so, and minimising unnecessary social contact is ultimately what the government wants.