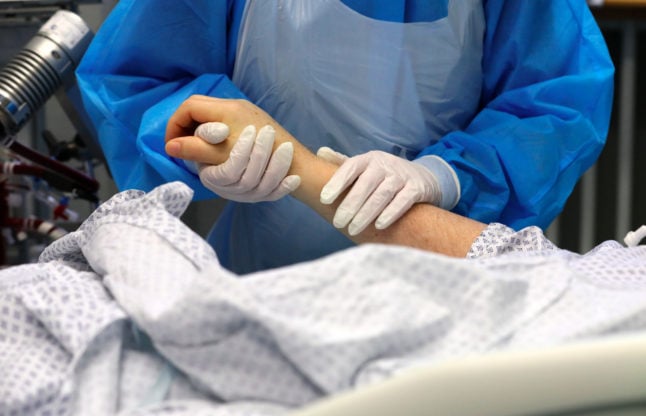 With an increasing number of patients being admitted to intensive care units, rising infections and not enough vaccinations, Germany is trying to manage another Covid-19 resurgence.

On Friday 25,464 new Covid cases and 296 deaths were reported to the Robert Koch Institute (RKI) within the last 24 hours.

It comes after lower numbers were registered this week, partly due to less testing and reporting being carried out over the Easter long weekend.

So, does the country need a tougher lockdown? Or is the so-called emergency brake mechanism (bringing in tougher measures like curfews when infections rise) enough to get the situation under control?

And what about reopening projects like the one in Saarland? In the tiny western state, gyms, restaurants and museums are open to people who can show a recent negative Covid test result.

Hans said it’s important to remember that Saarland is not simply opening up blindly – but that “contact restrictions are replaced by testing requirements, and thus we create incentives for testing”.

Hamburg mayor Peter Tschentscher (SPD) said this approach was a “mistake” as infections are “increasing everywhere”.

“We need a few weeks to come down, and then, safely accompanied by rapid tests, further opening steps can be advocated,” said the Hamburg mayor who has introduced a curfew in the Hanseatic city in a bid to bring down numbers.

What are scientists saying?

High profile German virologist Melanie Brinkmann said during the debate that science had warned weeks and months ago of this situation concerning the more contagious variant B.1.1.7 that originated in the UK.

“We made a clear appeal in January that this new variant was coming, that it would overtake, displace the virus that circulated before it, and that it had characteristics that would make it really hard for us to fight the pandemic again,” Brinkmann said. “And that was not heard. You just have to say that plainly.”

Instead, she said, the opposite was done: opening steps were allowed to happen when there were still too many infections spreading. The situation today is much more difficult, Brinkmann said, despite the inoculation campaign. “Vaccination is there, but it is too slow and will not be able to stop this third wave,” she said, adding that testing alone is not enough.

Brinkmann also said a long-term perspective is missing from the current management.

“What’s actually going to happen in a few months? Surely with the strategy we’re following at the moment, I’ll be in a permanent lockdown for the rest of the year, if I’m unlucky,” she said.

What do doctors have to say?

Cihan Çelik, senior doctor at a Covid-19 ward in Darmstadt, provided a perspective from his ward, where staff are preparing for a further increase in patient numbers.

He said there have been patient transfers across Germany, as some intensive care units can no longer accept Covid patients.

According to the RKI, on April 8th there were 4,474 Covid-19 patients in intensive care, with 509 new admissions.

Çelik said there was still a small amount of time before all Covid wards are at capacity, but warned that action needed to be taken sooner rather than later.

He said the average age on the ward had “dropped to 56” signalling that more younger people are getting infected.

In the direction of politics, he expressed a clear wish: “We as doctors would really like to get ahead of this virus for once, precisely because we have now had no breathing space before the third wave, to really get out of it with a low incidence.”