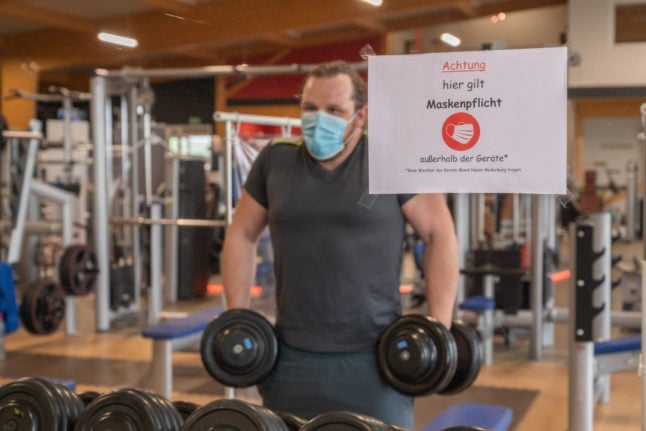 A man trains in a fitness studio in Orscholz, Saarland, which just opened on Tuesday to those who can present a negative Covid-19 test. Photo: DPA

There were also 298 deaths from or with the coronavirus over the past day, according to the RKI.

Exactly one week ago on Wednesday March 31st, the RKI had recorded 17,051 new infections and 249 new deaths within one day.

Yet the decrease is likely attributed to fewer tests being carried out over the Easter holidays, which stretched from Friday April 2nd to Monday April 5th. Testing is not expected to return to comparable levels until after the coming weekend in most states, according to the RKI.

As of Wednesday, a total of 4.6 million people (or 5.6 percent of the population) had been completely vaccinated, according to the German government’s ‘Vaccination dashboard’.

On Tuesday alone 322,039 vaccine doses were administered, as family doctor practices around the country gave out jabs for the first time.

On Wednesday afternoon German Health Minister Jens Spahn (CDU) was set to discuss how to proceed with second AstraZeneca jabs for those who had already received their first vaccines, and were advised against the substance.

The Standing Commission on Vaccination (Stiko) recommended last week that people under 60 years who have already received a first Covid-19 vaccination through AstraZeneca should switch to another vaccine for their second dose.

According to the RKI, the number of new infections per 100,000 inhabitants reported within seven days was 110.1 nationwide on Wednesday morning. The previous day, the 7-day incidence stood at 123.

Many states around Germany have been enforcing a ‘Notbremse’ (emergency brake) to tighten restrictions as the 7-day incidence climbs above 100.

However, other states such as Saarland, have opened up more businesses this week with increased testing.

The following graph from DPA shows where in Germany had the highest infection rates as of Wednesday. Figures remained highest in the eastern state of Thuringia. The nationwide 7-day R value was 0.81 on Tuesday evening ( down from the previous day of 0.9), according to the RKI. This means that 100 infected people infect on average 81 more people.

A drop in the R value could also be related to the Easter holidays, the RKI wrote in its situation report. “The values can only be assessed in a few days.”

The total number of recorded Covid-19 cases in Germany since the start of the pandemic increased to 2,910,445, according to the RKI, with a total of 77,401 people who have died from or with the virus.