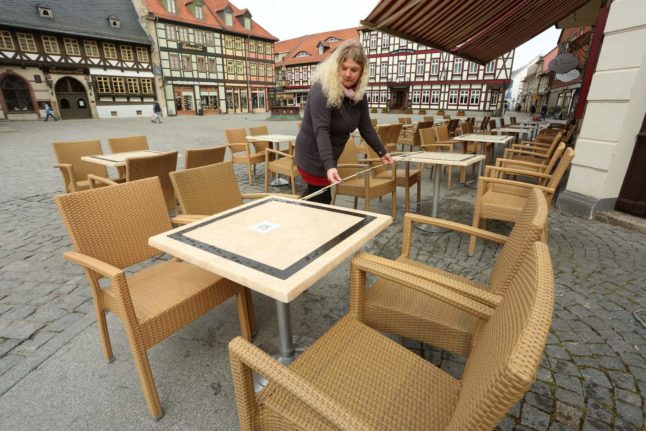 This cafe in Wernigerode, Saxony-Anhalt prepares to reopen on Friday as part of a statewide initiative to allow outdoor gastronomy with a negative Covid-19 test. Photo: DPA

Some of Germany’s 16 states, such as Saarland, are reopening public life – despite rising Covid-19 numbers – while others, such as Hamburg, are cracking down even further.

As part of Germany’s federal system, each state has their own approach when it comes to opening, or closing, schools, and which contact restrictions apply.

READ ALSO: Merkel vs Germany’s states: Who really holds the power to fight the pandemic?

In view of the inconsistent approach of the states in combating the pandemic, Chancellor Angela Merkel’s Christian Democrats (CDU/CSU) parliamentary group in the Bundestag is pushing for greater power at the federal level.

The aim is to enable uniform measures to be taken nationwide in crisis management. Earlier on Thursday, educators around Germany also called for standardised rules in regards to school openings and testing.

Can the federal government have the same power as the states?

The initiative of MPs Norbert Röttgen, Johann Wadephul and Yvonne Magwas envisages “giving the federal government (additional) powers to act in the same way as the states, namely to ensure the enforcement of the national objectives of the Infection Protection Act by means of a statutory order”.

The three CDU parliamentarians made this proposal in an email to other members of the Union faction, as seen by DPA.

The proposal comes after the last marathon meeting between Chancellor Merkel and state leaders in March, and ahead of their next meeting on Monday April 12th.

At the last coronavirus summit before the Easter holidays, Merkel called for a strict but brief shutdown, but quickly overturned the decision following criticism from state leaders.

The meeting showed that joint action across the country is “no longer possible,” wrote the three MPs, referring to Germany’s inability to take action at a federal level.

“This revealed the weakness of the Infection Protection Act, which is that this law only authorizes the state governments to issue legal ordinances to fulfill the goals of the law, but not the federal government.”

This gap in the Infection Protection Act, he said, must be swiftly closed by the Bundestag, they said.

Röttgen, Wadephul and Magwas asked the members of the CDU/CSU group to join their call for action.

Since faction leader Ralph Brinkhaus (CDU) had also pleaded for uniform nationwide regulations in the past, he is likely to take a positive view of the initiative.

Support came from Germany’s northernmost state of Schleswig-Holstein. “I am open to more binding regulations also in the Infection Protection Act for regions with an increasing incidence above 100 (new infections per 100,000 residents in seven days,” said state premier Daniel Günther (CDU) when asked.

“However, in this law, we should get to the root of the problem and focus on the really effective solutions to contain the pandemic.”

The reaction from Lower Saxony was quite different: “At present, I cannot see how more legal federal competencies will lead to better containment of the pandemic – and that must be the concern of us all, after all,” said state premier Stephan Weil (SPD).