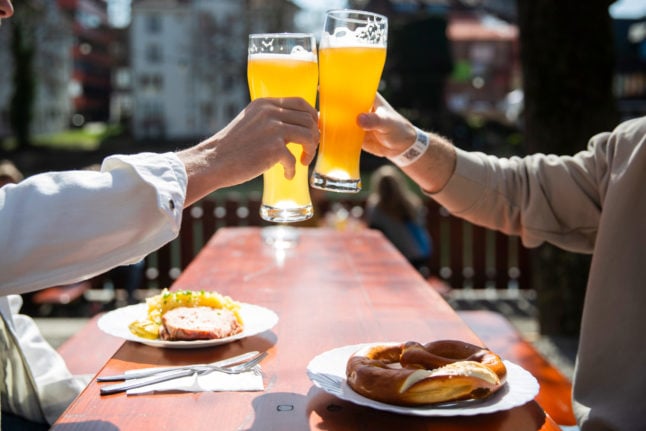 As debate rages nationwide about whether tougher measures are needed to slow surging infections, the historic university city near Stuttgart has chosen a different tack by offering free coronavirus testing centres that hand out “day passes” to those whose results come back negative.

The passes then allow access to what is currently one of Germany’s most vibrant city centres.

“Customers’ eyes light up when they come in, it’s finally a bit of normality again,” said Sandra Pauli, who was allowed to reopen her home decor shop some two weeks ago. “Everyone is very happy.”

READ ALSO: Is Germany heading for a tougher Covid lockdown?

The usual rules on mask wearing and physical distancing still apply, said Pauli, who believes the rapid testing scheme “is the only way to live with the coronavirus” while keeping high street stores afloat and welcoming people back into theatres and museums.

The rest of Germany is closely watching the Tübingen model, and a string of cities and towns are planning similar experiments.

The central city of Weimar has already opened shops and museums to those carrying a negative test.

The small state of Saarland is going even further and wants to end its shutdown on April 6th, using a combination of rapid antigen tests and hygiene precautions to open up cinemas, gyms and outdoor restaurants.

But the trend is not without controversy at a time when scientists are warning that new, more contagious virus variants could see Germany’s caseload explode in the coming weeks.

Among the loudest critics is Chancellor Angela Merkel, who in a rare live television interview on Sunday urged regional leaders to stick to agreed Covid curbs.

“I don’t know that testing and shopping is the right response to what is happening right now,” the veteran leader said, noting that even in Tùbingen the rate of infection was climbing despite the thousands of tests.

READ ALSO: Why one German town is lifting its lockdown despite third coronavirus wave

Merkel and the premiers of Germany’s 16 federal states agreed in early March to pull the “emergency brake” and impose renewed restrictions if a region hit more than 100 new infections per 100,000 people over a seven-day period – as in currently the case across most of the country.

But many regional leaders have proved reluctant to revert to harsher shutdowns. A woman getting a rapid test in Tübingen in March. Photo DPA

Outside Tübingen’s picturesque city hall, on a square lined by colourful half-timbered buildings, people have been queuing since the early morning to have their nostrils swabbed at one of several testing sites in the city.

Almost 50,000 tests have been carried out over a two-week period, according to doctor Lisa Federle, one of the driving forces behind the project, which is being monitored by the University of Tuebingen.

“We have enough tests,” said Federle, adding that “we have to do something because people no longer accept” the restrictions.
“I think it’s significantly safer to meet outside after you’ve been tested, than meeting people in your home,” she told AFP.

Tübingen mayor Boris Palmer, of the left-leaning Green party, said the project had given hope to business owners who were feeling increasingly desperate.

Although the district’s incidence rate has climbed from 41 on March 15th to 98 on Monday, he said the increase “was not any faster than elsewhere in the country”.

But the city of 90,000 residents risks becoming a victim of its own success, with the intense media attention drawing in a flurry of daytrippers from across Germany.

The influx has prompted local authorities to limit the number of tourists allowed to benefit from the day-pass scheme.

Rene, 36, and his girlfriend drove 100 kilometres (60 miles) to celebrate his birthday in Tübingen.

“We’re going for a nice meal now,” he said. “We just wanted to do something special.”

The scheme is set to run until April 18th, and Federle thinks it’s already a success.

“People can see that we’re not just closing down, that we’re also trying to find another way.”