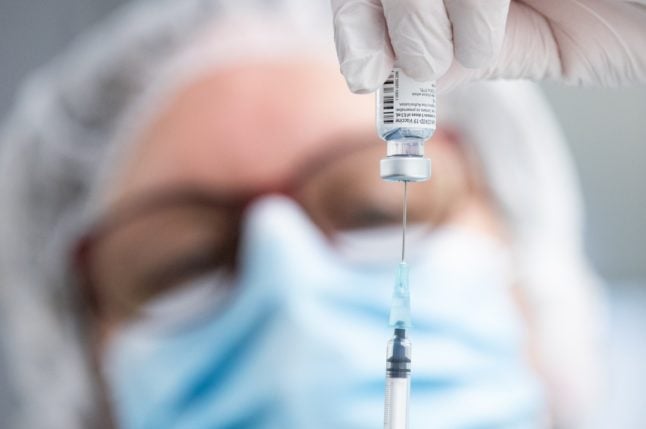 A Pfizer-BioNTech vaccine is administered at a vaccine site in Bielefeld. Photo: DPA

Here is a look at some of the key data.

Did AstraZeneca suspension hit the pace of the vaccination regime?

The pace of the vaccine programme did indeed slow down slightly in the wake of the AstraZeneca suspension, numbers provided by the Ministry of Health show.

Some 286,000 people received a vaccination on Wednesday of this week, which marked a stagnation in the pace of the rollout. That is a big improvement on the 209,000 who were vaccinated seven days beforehand (Wednesday March 17th). But it is only slightly higher than the 280,000 jabs given on Wednesday March 10th.

That dip coincides with the decision to suspend use of AstraZeneca, which was made on March 15th and was lifted on March 19th.

Health Minister Jens Spahn suspended use of the vaccine after the Paul Ehrlich Institute found a possible link to a highly rare form of cerebral thrombosis that caused the deaths of three women shortly after they had received the jab.

Three days later the European Medicines Agency affirmed that the jab was “safe and effective” but updated its advice on side effects.

The high point of Germany’s vaccine rollout to date came on Friday March 12th, when 304,000 people received a vaccine in a single day. As of Thursday, a total of 3.6 million people in Germany had received both doses of a vaccine, according to the Robert Koch Institute (RKI). Since mid-February there had been a clear increase in speed in a week-to-week comparison.

While the rate of vaccinations is clearly on the rise again, DPA reports that some federal states still have not reactivated their online booking system for appointments since the AstraZeneca suspension.

As of Wednesday, 15.6 million doses of vaccine had been delivered to Germany: 70 percent has been the BioNTech jab, 23 percent from AstraZeneca and seven percent from the US vaccine Moderna.

Are there millions of unused doses being stockpiled?

Various German media outlets have claimed that the federal states have been hoarding millions of doses without using them.

State premier of Hesse, Volker Bouffier has rejected this claim as “simply wrong.”

A closer look at the numbers shows it is misleading to say that state are stockpiling doses for no good reason, although it is not completely untrue.

The Health Ministry recommends that states keep stockpiles of vaccines in case unexpected delivery delays lead to appointments being cancelled, and to ensure that there are enough doses in stock for people to have second vaccinations.

For Moderna the ministry recommends keeping 50 percent as backup, for BioNTech, 25 percent.

Research by der Spiegel shows that the states have been very efficient in their use of BioNTech, but much less so with AstraZeneca.

None of the states have had serious issues with the BioNTech/Pfizer vaccine, which makes up 11 million of the 15.6 million doses that have arrived in Germany so far.

The Moderna vaccine only makes up a relatively small fraction of Germany’s programme (1.1 million doses so far) but is also being used efficiently.

The problems arise with the AstraZeneca vaccine. There have been serious issues with deliveries of this vaccine, with the British-Swedish company under-delivering on purchase agreements for the first quarter.

Still though, some German states have been more effective in using the vaccine than others.

The small city-state of Bremen has done the best job of including the British-Swedish vaccine in its programme, having used 82 percent of its stock.

SEE ALSO: Why have tens of thousands of Germany’s AstraZeneca vaccines not been used?

Rhineland-Palatinate has also done a good job: three-quarters of its stocks have been used.

Right at the back of the field is Saxony, which has used just 28 percent of its AstraZeneca vaccines. According to Spiegel’s research, the vaccine had been set aside for various pilot projects including vaccinations in GPs practices and in hotspot regions.

Due to the slow implementation of these projects, most of the stock is still sitting unused in warehouses.

Pace of vaccinations among over-80s

There are considerable differences between the federal states in their efficiency in vaccinating the oldest members of society.

While data produced by the Robert Koch Institute shows that 73 percent of those over 80 in Saarland have been vaccinated at least once, only around 59 percent of this age group in Baden-Württemberg have had their first jab.

Baden-Württemberg’s social affairs minister, Manne Lucha, recently promised that everyone over the age of 80 would receive a jab by the end of March.

In the northeast, less than half of the over 80s have been vaccinated in Mecklenburg-Western Pomerania.

Vaccinations over Easter and beyond

Most states have said that they intend to continue vaccinating people through the Easter break.

In the week after Easter, according to a decision of the federal and state governments last week, GPs are also to set to join the vaccination campaign, but initially with just under one million doses per week – about 20 doses for each practice.

After Easter, the deliveries are to increase significantly. According to the Health Ministry, up to 15.3 million doses of vaccine are to be delivered in April – only 4.5 million less than in the entire first quarter.

READ MORE: What you need to know about Germany’s pledge to make vaccines available at GP practices