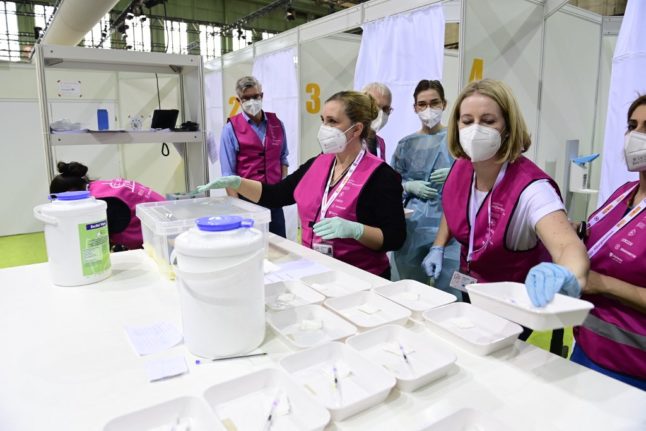 Health workers prepare trays with syringes with the AstraZeneca vaccine against Covid-19 at a new vaccination centre at the former Tempelhof airport in Berlin on March 8, 2021, amid the novel coronavirus / COVID-19 pandemic. Tobias Schwarz/AFP

New data from health research institute Robert Koch Institute (RKI) shows that for 11 of Germany’s 16 states, over half of the AstraZeneca vaccines received have not been administered.

For example in Saxony, the situation is particularly bad, with only 15.1% of the state’s AstraZeneca supplies having been administered to people. This means that of the 105,600 doses sent to the eastern German state, almost 90,000 are still in the fridge.

The situation is not much better in other states, with Mecklenburg-Vorpommern having used only 18.7%, Hessen 24.7% and Thuringia 27.8% of the doses delivered.

So, is it true there are thousands of unused doses?

Yes, but it’s not quite as clear cut as all that as the picture varies between states. Certainly, Mecklenburg-Vorpommern say it’s not the case, denying that there are vaccine stocks “lying around”.

EXPLAINED: How German states are speeding up the AstraZeneca vaccine rollout

They say the RKI data in question includes doses, which have been sent out but not yet received, accounting for the discrepancy.

Baden-Württemberg have also attributed the low jab numbers to statistics, saying that shots administered in hospitals were only included in the data at a later stage.

It’s a different picture elsewhere. In Schleswig-Holstein, for example, a move to a new appointment-booking software caused delays in giving the shots, while in North Rhine Westphalia, the vaccination pace in hospitals was deliberately slowed.

This allowed them to maintain staffing levels because some employees needed to take short-term sick leave because of side effects to the jab.

And in Saxony, it seems that people aren’t taking up all the available appointments. Of the more than 74,000 vaccination appointments available last week, over 14,000 were still available.

Are the other vaccines affected, too?

AstraZeneca is experiencing the worst of the backlog, but yes other vaccines are affected.

If you include the other vaccine manufacturers – BioNTech and Moderna – then the data shows that Brandenburg has the largest backlog with only 64.9% of their total supplies having been used. This means that almost 112,000 doses are still sitting in storage.

The vast majority of vaccinations done in Germany have been given to the 80s age group and have used the Pfizer vaccine, which is made by BioNTech.

There must be more to this than statistics – is something else going on?

Yes, there are a few things at play. There are logistical problems, too, such as the way vaccines are administered.

Currently, jabs are given in special centres, rather than easier-to-access doctors’ surgeries, while the booking system is complicated and varies from state to state.

Why’s the AstraZeneca vaccine being affected in particular?

Germany has a history of vaccine scepticism and the way the government has handled the authorisation of the AstraZeneca vaccine has only exacerbated this.

Part of the problem stems from the decision to put an age limit on the use of the Oxford-made vaccine.

At the end of January, Germany’s vaccination committee STIKO said the jab shouldn’t be used in people over the age of 65 because the trials didn’t have enough data on its use in older age groups.

But hasn’t the government changed its mind now?

Yes, on March 4th STIKO overturned its earlier decision, saying the AstraZeneca vaccine could now be used in all age groups, citing “robust data” on the vaccine’s efficacy in older age groups in England and Scotland.

So, what’s the problem?

This U-turn has left people confused. Although the AstraZeneca vaccine trials show it is safe and effective, just like the other available jabs, the public condemnation of the vaccine has substantially damaged public confidence in it.

Many people saw the lack of full approval as a criticism of the vaccine itself, prompting concerns it wasn’t safe.

The situation is said to be gradually improving, but there have been widespread anecdotal reports of people still refusing the AstraZeneca jab because they don’t trust it or see it as a poor relation to the other shots on offer.

Disdain for the Oxford-produced vaccine was initially echoed in some healthcare practitioners, too, with chairman of the World Medical Association Frank Ulrich Montgomery saying that medical staff should be vaccinated with “better-performing vaccines”.

In a bid to undo some of the damage, Steffen Seibert, a spokesperson for Angela Merkel, even took to Twitter to state that the AstraZeneca vaccine was both “safe and highly effective”.

What is the government doing about all this?

The German government is facing increased criticism about the slow pace of its vaccination rollout, a far cry from the praise it received for its speedy response to testing at the start of the pandemic.

According to the Robert Koch Institute, Germany has administered a first dose to just 6.2% of the population, with 3% having had two jabs. This is in line with other countries in Europe, but far behind countries like the UK, Israel and the US.

But steps are being taken to improve the situation.

Health minister Jens Spahn has asked for teachers to get priority access to the AstraZeneca vaccine and has requested the army’s help in giving it to state workers like police and soldiers, too. Homeless people are also expected to move up the list.

To address the accessibility issue and ease any bottlenecks, Merkel has said that doctors will be able to carry out vaccinations from their practices by the end of March.

Ursula von der Leyen, the European Commission president, has said that stock supplies to the EU are due to improve next month, after admitting that the EU did not order enough vaccine doses initially.

This will help speed up the pace of vaccination in Germany in April, too: at least another 10 million doses are due by 4th April, according to government figures.

And the pace has already picked up. According to RKI data on Monday, 232,388 doses of all three vaccines were given last Friday, up from 192,748 a week earlier.