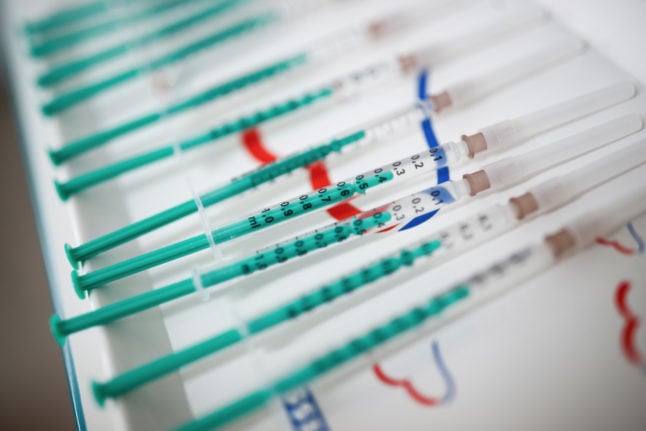 Vaccine jabs at a doctor's office in Senftenberg, Brandenburg, which were already delivered in March ahead of the April roll-out across Germany. Photo: DPA

That’s according to a draft resolution from the Chancellor’s Office, which the federal and state governments discussed at their vaccination summit on Friday.

“With the quantities we expect in the first weeks of April, (…) it will be possible to start with about the equivalent of one vaccination consultation hour per week in GP practices,” said Health Minister Jens Spahn of Chancellor Angela Merkel’s Christian Democrats (CDU) in Berlin on Friday.

Step by step, there will be more vaccinations, he said. Last week, before the interruption of vaccinations with manufacturer AstraZeneca, Germany’s 16 states injected almost 1.8 million vaccine jabs.

In the week after Easter, almost 3.3 million doses are to be delivered throughout the country. According to the draft, doctors in private practice are to administer about one million doses.

With 50,000 practices participating, that would be 20 doses per week.

There is to be a boost three weeks later: In the last week of April, 5.4 million doses are to be delivered, 3.2 million of which are to be administered in the practices.

Then, for the first time, more doses could be administered at practices than at the vaccination centres.

For the centres, 2.25 million doses per week are to be reserved, according to the Chancellery draft. In some states, vaccinations are already possible in selected medical practices, for example those treating cancer patients.

According to the plans, 270,000 BioNtech/Pfizer vaccine doses from a 580,000-dose supplementary delivery will be used to ensure a minimum of one million vaccine doses for doctors’ offices in the weeks after Easter.

The remaining 310,000 vaccine doses would then be earmarked for use in particularly affected border areas. Specifically, the paper names Saarland because of its proximity to the French department of Moselle, and Bavaria, Saxony and Thuringia because of the critical situation on the border with the Czech Republic.

The draft does not yet specify how many vaccine doses are to go to which state.

What will the role of AstraZeneca be?

The new vaccination plan was made possible, in part, through a decision of the European Medicines Agency (EMA) the day before. After a new review, the EMA reaffirmed its assessment that the vaccine from the British-Swedish manufacturer AstraZeneca should continue to be administered.

Spahn temporarily suspended vaccinations with the AstraZeneca  vaccine on Monday after several cases of blood clots in veins were reported following the jab.

Since Friday, the jab has been available for use again in Germany. However, an extra warning about the possible rare blood clots should be added.

Who will receive priority?

According to the draft, the doctors should first invite particularly vulnerable patients to get their jabs.

Spahn urged the states to protect people with pre-existing conditions and high risks of severe or fatal Covid-19 courses first.

Social Democratic (SPD) health politician Karl Lauterbach said: “The risk of dying from Covid in the case of an infection is 600 times higher for an 80-year-old than for a 30-year-old. That’s why I’m very critical of proposals to change the vaccination sequence.”

The fact that teachers, for example, are given priority vaccinations in some areas, as is the case in North Rhine-Westphalia, has provoked criticism for days.

Disability advocates called for people with an increased risk of a severe to fatal course of the disease to be vaccinated first.