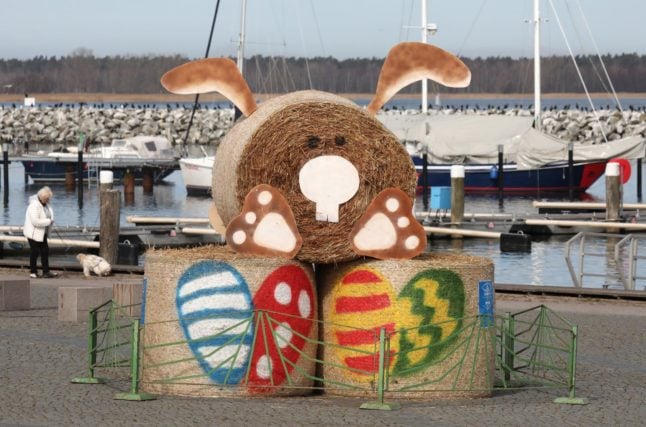 An Easter display in the normally tourist town of Barth, Mecklenburg-Western Pomerania on Monday. Photo: DPA

Between April 1st to April 5th, or from the Thursday before Easter to Easter Monday, public, private and economic life is to be largely shut down in order to break the third wave of the pandemic.

This was decided by German Chancellor Angela Merkel (CDU) and the state premiers in a marathon meeting lasting more than eleven hours early Monday morning.

The current lockdown measures will be extended by a total of three weeks until April 18th.

A discussion on how to proceed after that is scheduled for April 12th. “We have not yet been able to defeat the virus, it is not letting up,” Merkel said early Tuesday morning, explaining the tough measures.

Germany, she said, is in a very serious situation with exponentially increasing numbers of cases, a rising burden on intensive care units in hospitals and the spread of more contagious coronavirus variants.

Here’s what you need to know about the strict Easter measures:

Merkel calls the particularly sharp lockdown over Easter a “lull” – or days of rest associated with far-reaching contact restrictions.

“Thus, the principle #WeStayAtHome applies on five consecutive days,” the resolution of the federal and state governments states.

Accordingly, only on Saturday will grocery stores remain open. Private gatherings are to be limited to one’s own household and one other household, but no more than five people. Children up to 14 years of age will not be counted. Couples with separate homes will be considered one household.

All gatherings in public spaces will generally be prohibited during this time, according to the resolution, which states that “for five continuous days the principle that ‘we are staying at home’ will apply.”

Where outdoor dining is already open, it must be closed again for those five days. Churches and religious communities are asked to offer only online services on Easter. Only vaccination and testing centres are to remain open.

Restaurants and cafes are also to remain closed at Easter.

The “emergency brake” agreed at the beginning of March for more than 100 new infections per 100,000 inhabitants within seven days, is to be implemented consistently around the country.

Opening steps are to be reversed when the mark is reached – on Tuesday morning it was 108.1 nationwide, according to the Robert Koch Institute (RKI). However, the districts are also to take further measures if the threshold is exceeded.

Among the possibilities mentioned in the resolution are curfews, tightened contact restrictions and the obligation to conduct rapid tests on a daily basis in areas where spacing or consistent mask-wearing is difficult.

Domestic tourism to be put on pause

Tourism in the country will not be possible during the Easter vacations. Hotels and other accommodation facilities are to remain closed to holidaymakers. This point caused a particularly great deal of annoyance during the meeting.

Schleswig-Holstein, Lower Saxony, Mecklenburg-Western Pomerania, Saxony-Anhalt and Rhineland-Palatinate urged that their own residents be allowed to spend their vacations in vacation apartments, vacation homes, apartments, caravans and mobile homes, provided that they have their own sanitary facilities and that they can also organise their own meals.

Yet this has now been completely axed from the final resolution.

What about a holiday in Mallorca?

The lifting of the travel warning and quarantine obligation earlier this month for the German’s favourite Spanish island, often jokingly dubbed Germany’s 17th state, caused a lot of excitement. And holidays are still possible there – with exceptions.

However, the federal and state governments are appealing to airlines to stop offering additional flights for the Easter vacations.

In addition, a general testing requirement is to be introduced for all flights from abroad to Germany before departure. Until now, only travellers from “high-incidence areas” with particularly high numbers of infections and from areas with new virus variants have to present a test upon entry.

If you come from a “normal” risk area, you don’t have to be tested until 48 hours after arrival in Germany, which is difficult to control.

However, there are also areas in Europe that are no longer on the RKI’s risk list, such as Mallorca. Here’s the RKI’s current list.

The new mandatory testing is aimed primarily at vacationers returning to Germany in the coming weeks. In the Easter period, there are expected to be around 40,000.

The round of talks between the federal and state governments was one of the most difficult since the beginning of the pandemic. According to reports, Chancellor Merkel was very dissatisfied with the course of the meeting.

For hours, the large round was interrupted and negotiations continued in small circles. Berlin’s mayor, Michael Müller (SPD), spoke of a “difficult birth” after the discussions.

Bavarian Prime Minister Markus Söder also called the negotiations difficult, but also praised the clear course that had been found. “We know that the coronavirus lies lead-heavy over the country,” he said.

But he said it was now in hand to end the third wave more quickly than the previous one. “Impatience must not become our weakness,” the CSU chairman warned.